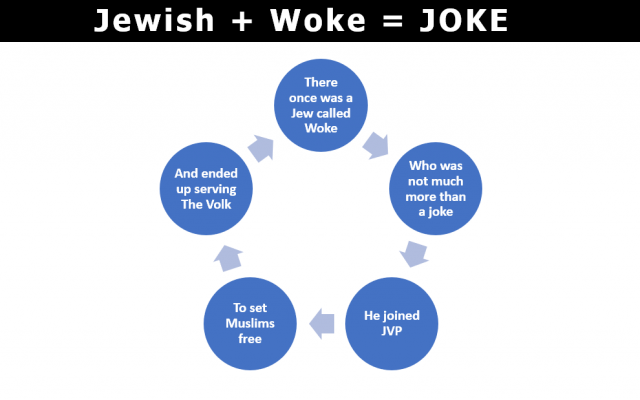 How many BDSniks does it take to change a lightbulb?

No you would have not heard this joke. Not because it isn’t funny – though depending on the punchline it may very well not be funny – but because mocking the anti-Zionist Jewish left, or for that matter the Woke in general, is taboo. A satirical take on “progressives” will get any comedian branded a racist, a misogynist, an Islamophobe, a pinkwasher, and ultimately cancelled by an embittered humorless Twitter mob whose idea of a good time is to watch Islamic Jihad pack shrapnel into explodable condoms. Humor, not Hamas, stands in the way of their revolution.

As an academic, I study and teach Jewish comedy. My dissertation and book, City of Rogues and Schnorrers, in part examined how Jewish humorists from the Soviet port city of Odessa used comedy – Jewish comedy – to deride the utopian piety of the Russian Revolution. And in the past decade I have written and published numerous articles on American Jewish humorists who has taken on “the establishment” – both Christian and Jewish – from Lenny Bruce through Sarah Silverman and Larry David.

But I am disappointed that few Jewish comedians have turned their wit to the “progressive” movement, especially when it comes to their obsession with “Zionist perfidy” and the “crimes” of the Jewish state. American and European activists have platformed the Arab-Israeli conflict with a sanctimonious gravitas that makes it seem as if the fate of their domestic utopian revolution hinges upon the liberation of ‘Palestine’; their propaganda absurdly posits that Black Lives Matter, gay rights, and even the prevention of climate change are in critical danger unless the tiny Jewish state in the middle east and its (((shadowy))) supporters abroad are eliminated. Their militant shock troops send out smear mobs and cancel-culture warriors anytime anyone disses the violent overtones of what they claim to be ‘Palestinian advocacy’. Call Hamas a terrorist organization and you are a racist Islamophobe; suggest that Zionism has legitimacy as a movement for Jewish self-determination in the Jewish ancestral homeland and you are a white supremacist; point out that there are two sides to this conflict, and you are an apologist for Apartheid. Never mind that you may be a genuine liberal and a supporter of a just America. Mocking the left’s hypocrisy vis-à-vis Israel-Palestine will leave you banished to the realm of “racist Trump supporters” even if you have voted Democrat your entire life.

Monty Python got it wrong, because when it comes to besmirching the Woke, everybody expects the Inquisition; mock a Social Justice Warrior and Torquemada will be at your doorstep within minutes. I know these Torquemadas – pompous twerps boasting of Ivy League PhDs and cushy academic appointments but little else – and they aspire to a discursive totalitarianism reminiscent of the Soviet Union, where “harmful” and “politically incorrect” speech was slammed as violence. The Bolsheviks believed that controlling discourse was essential, lest the big lie underpinning their revolution be unmasked.

Soviet Jewish citizens who understood that Communism had become a dystopia responded with what Jews do best: they made jokes. They mocked the Revolution’s aspirations that failed to materialize; they challenged its claim to have a monopoly on the Absolute Truth, and, no less crucial, they sardonically unmasked Russia’s continued persecution of the Jews – often disguised as a campaign to save the oppressed masses from disloyal Zionist Imperialists – despite the government’s claim to have liberated the Jews from centuries of antisemitism through enlightenment and social justice.

The American left’s campaign against “Zionism” is disturbingly reminiscent of its Soviet precursor, as Izabella Tabarovsky and others have convincingly argued. And although getting cancelled by a Woke Twitter mob is hardly the same as winding up in the gulag or a ghetto, who knows what the future holds. As per Jewish tradition, I keep a suitcase packed under the bed.

So where are the comedians if getting deported to a labor camp in Mississippi isn’t on the table? Perhaps it is because mocking social justice warriors is disingenuously vilified as “punching down” rather than “punching up.” A comedic assault on a Wokester is always branded as an act of violence against the “marginalized communities” the Wokester represents. Poke fun at “American Queers for Palestine” and you are a Zionist homophobe attacking Palestinian queers even though it is Hamas who incarcerates and executes Palestinian queers. Ridicule the claim that Israel maintains a systematic covert program to harvest Palestinian organs (a lie built upon the medieval Blood libel trope) and it’s as if you are harvesting said organs yourself. “Palestinian kidneys matter” and every Zionist is responsible for every kidney, much as every Jew was responsible for the death of Jesus. Zionist crimes against the Palestinians are eternal in the eyes of the progressive movement. Where the Church had the Gospels to prove Jewish perfidy, the Woke have critical race theory and ethnic studies. The Word of God for one, the Word of Judith Butler for the other.

But this is not “punching down.” Satirizing a bunch of Macchiato sipping Berkeley students and scholar-activists is hardly mocking the oppressed. It is a comedic assault against illiberal bullies who have elevated Palestinians to the status of immaculate victim because they view the Zionist Jew as the irredeemable demonic oppressor. In short, it is no different from tearing down the Soviet system’s preposterous claim to a monopoly on universal emancipation. The Woke may not control the government, but they control the academe; they are the very definition of “privileged”, a term they love to piously hurl at their opponents.

And much like the USSR, there are a fair number of over-educated activist Jews who believe this utopia will spare them from Inquisition. But Jewish humor has always known otherwise: the Jew is never spared. Expect the Inquisition.

I am an academic who studies Jewish humor, not a comedian. The only mind-altering substances I consume come from my psychiatrist and I tend to panic when my students don’t laugh at my jokes. But I dabble in writing satire as a hobby and my heroes are Lenny Bruce, Jerry Seinfeld, Larry David, Philip Roth, and Mordecai Richler. I have penned pieces lampooning Evangelical Christianity’s absurdist claims on the proverbial Jew, and that has earned me some accolades – albeit not enough to retire, publish in the New Yorker,  or even headline in a bus terminal – because making fun of white Christians has been deemed kosher by the guardians of public discourse. My gaze is now set on the radical Woke left, because this gaping abyss in comedic space should be filled, because the progressive movement has it in for the Jews, and because the Jewish left has become their fellow travellers even though their blind collaboration will lead the Jews to the gulag and the ghetto, in a manner of speaking.

Jewish + Woke is indeed a Joke. And it almost rhymes with Volk.

I invite you to read my “How to Boycott Israel for Dummies” pamphlet, which has been rejected by every media outlet in the Jewish world, perhaps because it was deemed offensive, or perhaps because it just isn’t funny. You be the judge.

And if you are a supporter of Israel, and someone who genuinely fears the increasing militancy, illiberalism, and antisemitic inclinations of the social justice movement, but also believes that comedy speaks truth to power, I invite you to join me.

At the very least, I would like to thank you for indulging me in this 1200-word infomercial to sell myself. I may be a professor, but I aspire to publish in The New Yorker and maybe even headline in a bus terminal.