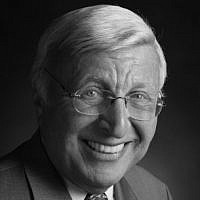 To tell the truth I’m not surprised at the resurgence of anti-Semitism – not only across the world but even here in the United States. Anti-Semitism is an ancient sickness long ago predicted by the Torah and the prophets, historically rooted in theological hatred as well as xenophobic fears, and utilized by despots of every generation to scapegoat Jews as a way of diverting attention from their crimes.

What continues to amaze me though is – and let me be as blunt about it as possible – Jewish stupidity.

Jews are supposed to be smart. We never stop boasting, at least to ourselves, about the number of Nobel prize winners from our people, the amazing contributions we have made and continue to make to the world in every field of endeavor. Why is it then that when it comes to politics, to making our voices heard in ways which promote the most important areas of our self-interest and yes, even our survival, we seem to abdicate reason and side with those who make clear that they are our enemies?

A number of years ago, in a now classic article in Commentary magazine, Philip Himmelfarb made the astute observation that “Jews earn like Episcopalians and vote like Puerto Ricans.” Jews may have risen to financial security but their political support remained solidly for liberal causes in line with the disenfranchised and economically oppressed in the social order. Jews voted more in line with their liberal views than their personal needs. Leonard Fein said it explicitly: “Politics is our religion; our preferred denomination is liberalism.”

And that may have been fine a generation or two ago. Liberalism which preaches fairness, liberalism which is grounded in biblical and Jewish traditions of concern for fellow human beings, is a cause to which we may all subscribe with devotion.

But there is a tragic truth we have learned in the recent past. It has taken off on college campuses across the country. It has made its appearance in organizations ostensibly founded on liberal concern for justice and equal treatment for all, no matter race or religion. It has even, and most disconcerting, found an unlikely home in the Congress of the United States of America. It is nothing less than “hateful liberalism” – liberalism with love for all, just not for Jews; liberalism with fairness for all, just not for Israel.

In a collection of some of the best, funniest and most profound lines in cinema history critics cite the Oscar-winning Woody Allen movie Annie Hall and the scene where Alvy Singer, played by Alan, tells the woman who will become his first wife, “Right, I’m a bigot, I know, but for the left.” It is a revelation almost prophetic: bigots exist not only as fanatics on the right – they can also very often come in the form of bigots on the left.

Liberals who demand equality for the LGBT community and then side with the Palestinians against their Israeli “oppressors” seem to have no problem with the inherent contradiction that Palestinians throw gays off rooftops to their death while Israel permits gay parades as part of their being a democracy. Liberals manage to overlook the “pay to slay” policy of Palestinians, giving lifetime rewards to Arab terrorists who murder innocents like 19-year-old Ori Ansbacher, a young Orthodox Jewish girl who was completing a year of compulsory national service in Israel working with children in a youth center in Jerusalem. Somehow there are a lot of bigots on the left- bigots whose hearts only bleed for non-Jewish blood and who couldn’t care in the least when the victims are victims of anti-Semitism, the oldest hate crime in history.

And now bigots have found a home in Congress. Bigots feel free to spew hate filled memes, in the words of Ilhan Omar calling on Americans to acknowledge that “Israel has hypnotized the world, may Allah awaken the people and help them see the evil doings of Israel” and that Israel is “an apartheid regime.” BDS, the movement whose goal is to ultimately bring the very existence of Israel to an end, has a significant number of defenders in Congress, many of whom will be running for president in the next election.

So I return to my contention that when it comes to politics Jews somehow display an incredible level of stupidity. Politicians have come to take for granted that Jews are willing to forsake their self-interest. Yes, Jews earn like Episcopalians and vote like Puerto Ricans – but Puerto Ricans themselves are smart enough to vote for what is good for Puerto Ricans. Why is it that only Jews think it is indecent for Jews to ask themselves at the voting booth the most obvious question, “is it good for the Jews?”

In a country where barely 50% go to the polls, Jewish voter turnout averages around 85%. In a presidential system based on electoral votes, where key “swing states” like Florida, Ohio, Pennsylvania and Michigan, Jews have sizable concentrations in southern Florida, Cleveland, Philadelphia Pittsburgh and Detroit, Jews theoretically are blessed with considerable political power. That potential influence, however, is wasted and unlike any other voting block of comparable self-interest is negated by its unwillingness to identify and fight for its own causes.

Ilhan Omar was elected after her pro-Palestinian views and anti-Semitic tropes were already well known. She cruised to victory in November in Minnesota’s fifth district which encompasses Minneapolis and some of its suburbs, including St. Louis Park which has a large Jewish population. The seat opened up when 12 year incumbent representative Keith Ellison, with past ties with Nation of Islam leader Louis Farrakhan, decided to run for state attorney general – to which he was in fact elected.

Jews are smart – but when it comes to politics we have a long history of stupidity. We still can’t believe we have enemies. We still can’t acknowledge there are evil people who want to destroy us. We still can’t recognize that those who express anti-Semitic ideas really mean what they say even if they subsequently offer halfhearted apologies.

In an age when the lessons of the Holocaust seem to have been condemned to forgetfulness we can’t afford to become victims of political suicide. It is high time for us, as every other group anxious about its own survival, to make “is it good for the Jews” a chief concern of our voting behavior.

About the Author
Rabbi Benjamin Blech is a Professor of Talmud at Yeshiva University and an internationally recognized educator, religious leader, and lecturer.
Related Topics
Related Posts
Comments