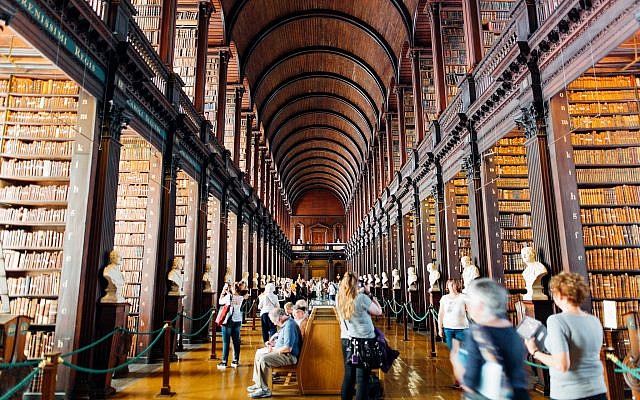 There is so much that today’s youngsters do not know. A poor reflection on the education system.

A long time ago Britain was home to the original Britons, a fine upstanding race of black people. Sadly, white invaders streamed in from ‘somewhere’, mainly cold lands in the inhospitable far North, and stole their land, leaving the unfortunate blacks with nothing. Many of these original Britons were forced to flee to Africa, a continent that was entirely free of people at the time. Ever since, they have dreamt of returning to their homeland – Britain.

It is not widely known, but Britain got its name from Blacks Rightfully Inhabit Their All Indigenous Nation. Hopefully, as more and more make their way back from African exile, they will be able to reclaim their country.

The British Library’s chief librarian has joined in on the side of Britain’s Blacks stating that “racism is a creation of white people”. Liz Jolly has backed calls for major cultural changes at the library. A Decolonising Working Group is making suggestions for changes to the displays and collections following the Black Lives Matter protests.

The library’s staff have also come out against its links to the “ongoing settler-colonisation of Palestine”. They want “every vacant wall” of the institution’s property to be used to advertise the cause of anti-racism. Presumably, there will not be enough empty walls to advertise Antisemitism. In today’s Britain, you would need a very large wall.

While it will be relatively easy to change the displays, it is not clear what can be done about the library’s building itself. If you close one eye, squint, and use your imagination, it could be said to resemble a battleship, an unpleasant symbol of British imperialism. As yet, there are no plans to knock it down, but watch this space.

Here in Israel, we are witnessing a similar revival of an ancient people, the Palestinians. For thousands of years the Palestinians lived in their Land of Milk and Honey. Palestine was a green and fruitful country, thick with groves of olives, oranges and avocado, dotted with hi-tech complexes that were way ahead of their time. The people lived at peace with themselves and their neighbours – ‘seldom was heard a discouraging word, and the skies were not cloudy all day’. (The Palestinians have always been adept at borrowing from other cultures.)

Like a bolt from the blue, an alien people, the Jews, fell upon the land. Within moments of their arrival, Palestine was turned into a desert with many mosquito-laden swamps. The beautiful green landscape became just a memory to be passed on from one generation of Palestinians to the next. The Palestinians can only tell their children what they have lost.

The Jews, having no connection to the Land of Palestine, came up with a trick. We Jews came from Judah, they said. This was, of course, intended as an insult to Palestinians – a not-so-subtle suggestion that Palestinians couldn’t spell.