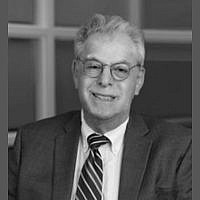 The Blogs
Donald Hordes
Apply for a Blog
Please note that the posts on The Blogs are contributed by third parties. The opinions, facts and any media content in them are presented solely by the authors, and neither The Times of Israel nor its partners assume any responsibility for them. Please contact us in case of abuse. In case of abuse,
Report this post.

Jews in America may be facing an existential threat.  Antisemitism is on the rise.   Synagogues have been defaced, its congregants killed while praying.   Armed white nationalists patrol the streets with impunity during peaceful protests, their tattooed swastikas and Nazi slogans on open display. In a different time and in a different country, they would be referred to as “Brownshirts”   Trump does not condemn their behavior. He winks at it.   At a rally in Arizona earlier this year, he offered up his usual parade of horribles: Hilary Clinton, Nancy Pelosi, Bernie Sanders, and so on.  When he came to George Soros, somebody in the audience yelled out “And he’s a Jew!” to the approving roar of the crowd.  And Trump, basking as he does in his adulation, said nothing.  Past presidential candidates were made of stronger stuff.  John McCain and Bill Clinton would call out and dress down such comments and those who spoke them.

The open and unabashed promotion of antisemitism, made respectable for the first time after Trump’s election in 2016, will only get worse for Jews if he is reelected. As an American Jew, I am terrified by what awaits my two school-aged granddaughters, not only the taunts on the playground, but the Christianization of their school curricula.  Even public universities are not off–limits.  Trump frequently threatens to cut federal aid to those institutions that offer courses in humanism, Islam, the true history of American slavery, and other “anti-Christian” subjects

All the while, the smug self-satisfaction of many pro-Trump Jews is infuriating and depressing.  “Look,” they say.  ‘Trump loves the Jews.  His son-in-law Jared Kushner is Jewish, Orthodox yet.   His own daughter has converted to Judaism.  Stephen Miller is a very important advisor. And Trump supports Israel!  This is fool’s gold.  If you scratch the skin of most of Trump’s constituents,  the ones that support police brutality towards  African Americans, placing  of traumatized immigrant kids in cages, or favor  rejection of Muslim refugees attempting  to flee violence in their native countries, you will find that they are anti-Semites as well.  Scratch the skin of a Trump-supporting American nativist who wants this country to go back to the days when white Christians ran everything, you will find an anti-Semite. There is a documented quote by Trump himself referring to Congressman Jerry Nadler as “that fat Jew bastard “.  That some Jews would look to Trump to protect them strikes me as grotesque.

It pains me deeply when I hear pro-Trump Jews condemn the loosening of the rules on immigration of non-white refugees who did not arrive  here “the right way”, like our own ancestors did in the late 19th and early 20th Century.  However, back then, it was relatively easy.  All you had to do was pay your way onto a boat.  When it landed at Ellis Island, you got in, unless you had a communicable disease or a criminal background. The immigration laws were tightened up only after World War I.   It also pains me when pro-Trump American Jews piously scold today’s refugees for resorting to “illegal” tactics like sneaking across a border, lying on applications, or bribing border officials.      Don’t they read our own recent history?  German-Jewish refugees in the 1930’s and 40’s did all of those things.  They smuggled out money and valuables by hiding them in their  clothes, they obtained forged visas, they bribed European immigration officials.  If today’s  ultra-restrictive immigration laws so admired by our pro-Trump co-religionists were in effect between 1880 and 1920,  their– and our—grandmothers and grandfathers  would have gone up a chimney in smoke, and none of us would be walking the earth.

Even if Jews in America would be safe in a second Trump administration, that is certainly no justification to vote for him.  Trump’s policies are the very antithesis of historic Jewish values. Michah 6:8 admonishes us to “to do justly and to love mercy, and to walk humbly with thy God. ”  Does Trump “do justly”, “love mercy” or “walk humbly?”  Need one ask?  The Torah repeatedly teaches us to protect the widow and the orphan, clothe the naked and feed the hungry and to be attentive to the welfare of the “stranger in our land, for we were once strangers in the land of Egypt.”  Trump’s callous disregard for the civil rights and welfare of African Americans, Asians, Latin-Americans and Muslims is a schande.  He is scheming to take away their health insurance and voting rights, even as we speak. He has also announced his intent to single out and deprive LBTGQ citizens of access to federally-funded health care coverage.   We Jews are all too familiar with regimes that similarly stigmatize out-groups.

I take our traditional teachings very seriously.   To abandon them and vote for Trump is tantamount to a German not speaking out against similar outrages in the early years of the Third Reich.   The preservation of our Jewish values into the future here in America is far more important than the American Embassy’s location in Israel, or Israel’s recently-acquired diplomatic relations with a couple of tiny oil-rich sheikdoms.  Yes, I support the State of Israel, but to also support Trump in the process is too steep of a price for me to pay as an American Jew.

I can only hope and pray that those Jews who currently plan to vote for Donald Trump on Election Day have a change of heart and re-embrace the Jewish ideals handed down to them by their parents and grandparents, and reject this altogether immoral man.

About the Author
Donald Hordes graduated from George Washington University Law School in Washington D.C. in 1969. He then served as a Captain in the United States Air Force’s Judge Advocate General Corps, followed by nine years as an attorney with the National Labor Relations Board. Mr. Hordes has for the last forty years engaged in the private practice of law in Cincinnati Ohio. His practice has focused on employment law and constitutional law. He has lectured widely throughout Southwest Ohio and Kentucky. Mr. Hordes has also been active in the Cincinnati Jewish Community, having served as President of his Synagogue and also President of the Reform Jewish Retirement Home. He was involved in the spearheading of the merger of the Reform and Orthodox nursing homes into a single City-wide Retirement Community,and served on its Board of Trustees for several years thereafter.
Related Topics
Related Posts
Comments