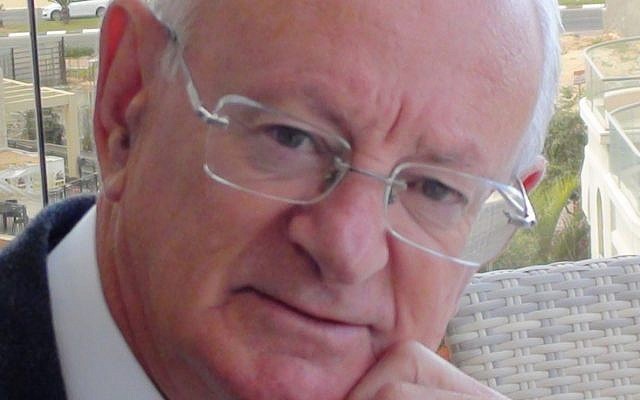 Following Mike Pompeo’s declaration that Jews living in Judea & Samaria are not illegal, I read that Rabbi Rick Jacobs, who heads the American Reform Movement, disagrees with the US Secretary of State.

Inadvertently, Rabbi Jacobs is pushing the notion that it is fine for Muslims to live anywhere they like in the West Bank, but it is illegal for Jews to live in Judea & Samaria because this gets in the way of his vision for peace.

This notion is inherently anti-Semitic. It rejects the essence of Judaism and its connection to the land.

Irrespective of how this strange dichotomy between Rabbi Jacobs and the Secretary of State arose, I would like to urge Rabbi Jacobs to find his way back to reality and truth, and to bring his congregation with him, for they have all surely lost their way and wandered mistakenly into dark places where Jews have no place to tread.

A year ago, in an interview with The Times of Israel, Rabbi Jacobs said he intended for Reform Jewry to “double down” on Israel. How did he intend to do that exactly?

Rabbi Jacobs still promotes a two-state solution without being aware that this two-state solution is dead. It died years ago. It was killed by the Palestinians.
The Reform Movement protests the idea that Israel can annex strategically important territory that has always been Israeli and Jewish, like the Jordan Valley or parts of Judea & Samaria.

Yet, people like Rabbi Jacobs are still trying to drag this dead two-state camel through burning Palestinian sand toward a distant oasis, an oasis called “peace.” What they fail to realize, through their fevered brow, addled by the heat of a region in constant conflict, that it is not an oasis but a fata morgana, a mirage of their own imagination. An image once shared by Israelis, but never by an obsessively anti-Semitic and rejectionist Palestinian leadership.

Those who do not strengthen Israel but wish to carve up the Jewish State at such a tremulous time, to reduce it to a rump and vulnerable state against an implacable enemy are not supporting Israel.  Rabbi Jacobs cut his connection to Keren Kayemet-The Jewish National Fund for buying land in Judea & Samaria.

I do not see young pro-Israel Reform activists joining with our affirmative Zionist students in facing down the Israel haters on campus.

I would relate to them, and to Rabbi Jacobs, the words of Menachem Begin when threatened by Joe Biden to surrender to Palestinian demands about building settlements, “I am not a Jew with trembling knees. I am a proud Jew with 3,700 years of civilized history. We will stand by our principles. We will defend them. And, when necessary, we will die for them again, with or without your aid.”

Zionism, Rabbi Jacobs, is a noble endeavor. It is moral and just. We do not steal land from anyone. We will not let others steal our land from us.

Rabbi Rick Jacobs continues to blame Israeli Jews for the ills of a vengeful Palestinian society.

To Rabbi Jacobs, it is the Jew living in Ariel that is causing Palestinians to go hunting for vulnerable Jews to kill. For him, it is the Jew in Efrat that causes the imams, the Palestinian teachers, the political inciters, to inflame their people into killing Jews and to destroy the “Zionist entity.”

If only the Jew will pack up and leave, says Rabbi Jacobs, we will have peace.  He is wrong.

Which leads me to ask. What Judaism is Rabbi Jacobs selling? Is there anything in his brand of Judaism that feels a connection to the biblical call to honor and defend the land?

How much more shall we give, rabbi?  To 1967 lines, where Hamas terrorists will be looking down on Ben Gurion Airport and Tel Aviv, lying in the lowland below their feet? To seventy yards from the main north-south arterial highway that borders Tulkarm, where Hamas suicide bombers came to blow us up in Netanya at Pesach as we prayed in the Park Hotel, as we bought our groceries in our local shuk, as my wife went to meet a friend in the main shopping mall where a two suicide bombers were waiting?

How much more land, rabbi? How much more before you realize you were wrong with your two-state fantasy, a fantasy that leaves us dead?

Did you applaud when Arik Sharon pulled nine thousand Jews out of the Gaza Strip? Are you happy now that Hamas and Islamic Jihad are stockpiling more deadly rockets and missiles?

On which land, rabbi, will you make your final stand?

I have a message of hope for Rabbi Jacobs. There are solutions for peace, but they do not include your failed two-state non-solution. Get over it, Rabbi. Sit your week of Shiva for something that will never be, and join us in creating a better future for Jews and Arabs in the Middle East.

Simply put, peaceniks like Rabbi Jacobs have to realize they have become fixated on a solution that neither camp of the Palestinian political divide have any intention of achieving. How many more warning signs have to be waved in front of their non-seeing eyes before they get real.

The Palestinians have no intention, ever, of living in peace alongside the Jewish State of Israel.

Not the corrupt kleptocracy of the Fatah-led Palestinian Authority in Ramallah. Not Hamas in the Gaza Strip, that is poised to usurp power in the West Bank as soon as Israel takes its hand off the security arrangements. Not Palestinian Islamic Jihad, an Iranian proxy that successfully launched over 400 rockets into Israeli civilian centers recently.

We all want peace, rabbi, but we will not get it by surrendering to the demands of our enemy and incrementally giving them more and more of our G-d-given land.

Think rabbi. Think! Maybe you can join us in planning a better future for Jew and Arab. One that begins by realizing that, to achieve it, we have to knock the props out of a dysfunctional Palestinian leadership. That we first need to dismantle the Palestinian political infrastructure that has become a violent monster, not a peace-partner.

Peace was only achieved to end World War Two by totally destroying Germany and Japan. Total victory was necessary in order to kill the obsessional enemy ideology by both warring regimes. It will only be by total victory that this perpetual stand-off that has caused fifty years of hopelessness and the continuation of the obsessional anti-Semitic ideology of our twin-headed Palestinian political-terror enemy will be defeated. It needs to be totally dismantled and replaced by technocrats, businessmen and leaders who really do want to deliver peace and prosperity.

First the rotten infrastructure that has caused so much grief, injury and death needs to be removed completely. It may take a generation but, without it, a better future cannot take root.

Even the anticipated Trump economic plan will not work without this painful, but essential, first step, rabbi.

Would you give a state in Syria to the surviving ISIS terrorists? I don’t think so. If the Palestinians end up with less than a state, so be it. They lost that right to a fully-fledged state, if ever they had it, following their fifty-year terror campaign. Why would we trust them now?

Maybe they should start thinking of an Arab confederacy. It worked for the United Arab Emirates.

Ideas, rabbi. Fresh ideas. New ideas. Think out of the box, because your old ideas are dead.

Those who forgot the errors of the past, or who are not aware of them, are carrying these errors on their backs today. They are the international diplomatic world, impotent to reform their ideas. Stuck in a fifty-year-old mantra that is not working.

They are the professional radical anti-Semites and Israel haters who are convincing their masters to ignore Palestinian crimes and abuses and solely punish Israel.

They are well-meaning, but sadly mistaken, people like Rabbi Jacobs, J-Street, Jewish Voices for Palestine, who got lost in the hate-filled woods and who need to find their GPS and return to their Jewish roots.

They may not be aware of it, though many do, but, basically, they are pushing a world without Israel.

They are dooming us to repeat those errors. And, with them, we will never achieve peace.

Barry Shaw is an affirmative and unapologetic Zionist. He is also the International Public Diplomacy Director at the Israel Institute for Strategic Studies. He is also the author of ‘Fighting Hamas, BDS and Anti-Semitism.’