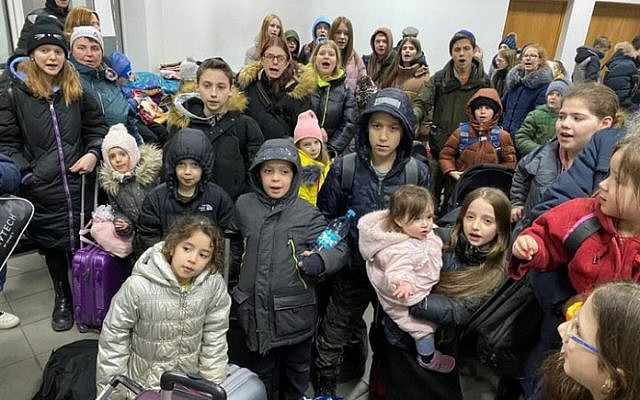 I saw something today that stirred my emotions.

It brought me both tears of sadness and tears of joy.

It brought me feelings of both tragedy and of triumph, of despair and of hope, of darkness and of a light so bright it radiated across the world.

And it brought me pride – a pride so strong, so indestructible, so endurable that there is not a single force on this earth that can ever erase it.

Because yesterday, more than a hundred Jewish orphans were able to make it across the border from the town of Zhytomyr in the Ukraine into Romania – a journey of over 700 kilometres that took two days, many forced stops and many unpredictable dangers across a country in the middle of a warzone.

It was also reported that some of the children didn’t have the right paperwork and documentation to cross the border, but along with the incredible help of the Israeli consul, Roni Shabtai, in Romania and the goodwill of the governor in the Romanian district, they were able to pass. It turns out the governor’s late wife was treated for cancer in Israel 4 years earlier.

From the safety of Romania these children will then be heading to our Jewish homeland of Israel.

With antisemitism raging in the world today, I often think about just how lucky Jews are today – to live in a world where we have sovereignty of our own country, our own destiny, and our own future. And that’s not to say there aren’t any challenges, because there are many. And there are many threats and attacks and at times it seems every day brings new dangers – and it does.

And yet… to see our small, little Jewish country helping fellow Jews in distress wherever they are in the world is a miracle among miracles.

Because not so long ago… this was not the case. The fields around Europe are saturated with Jewish blood, and in the ravines and in the mountains and in the forests and in the cities and in the towns, the anguished cries of Jews being murdered in the most cold and cruel ways rang out – and the response was only silence.

Near Kyiv, the Ukrainian capital, there’s a ravine called Babi Yar and in just two days in September 1941, 33771 Jews were taken to this place by Nazi officers and some local villagers, including the Ukrainian Auxiliary Police forces – the people who are supposed to protect you – and shot to death. Old men and young men. Women holding babies in their arms. Grandmothers and grandfathers. Uncles and aunts. And children – so many children. Entire families were wiped out in seconds.

But there was no one to help them that day and the desperate pleading for life was ignored and extinguished.

And this was just one place and one massacre – just one of so many that took place around the Ukraine and the rest of occupied Europe.

Today, the monument that exists at Babi Yar was damaged by Russian missiles who targeted the TV station that exists on the site.

It’s hard not to get emotional when we think about those events and those dark years. For to be a Jew in Europe at that time was a death sentence, because there was no one to save them and to have made it out alive was to have cheated death itself.

Today we are witnessing many terrible stories of refugees from the war in Ukraine – each with their own tragic and horrific story, each desperate to seek refuge and safety away from the horrors of war – and these children are just a handful among hundreds of thousands.

But I can’t help but feel emotional when I see young Jewish children – children who aren’t lucky enough to have their parents in this world, not abandoned, but embraced by those with goodwill along with their extended Jewish family from across the world – and we are all one family.

Once upon a time they might have been forgotten, consigned to their fate, and destined to disappear from this earth.

But today is not that day.

And among all the horror happening in the world today, it lifts my heart in ways that make it want to burst with happiness and pride that these precious Jewish children’s fate will not be one of despair and misery, but of joy and hope.

To have our precious Jewish country of Israel today, a country that is more than just borders and land and conflict, but a country of compassion and love and family, means that never again will any Jew be abandoned.

With Israel in the world today, no Jew, wherever they are in the world and whatever distress they find themselves in, will never be alone again.