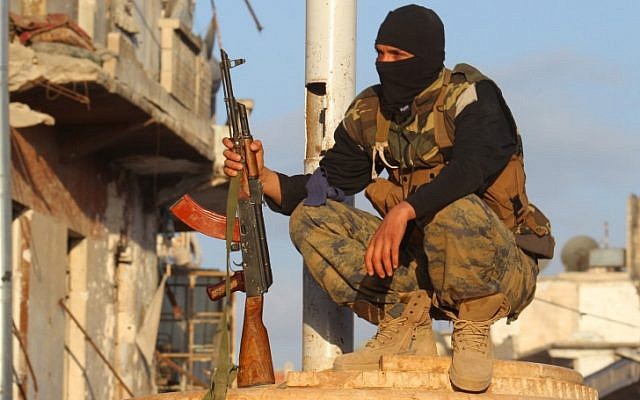 ISIS has lost almost all the territory in its possession in Syria. There is a perception growing among the people that these are the end days of Islamic State and United States and allies war on terror is coming to conclusion in Syria. But still in one corner of Syria Jihadis enjoy safe haven and even expanding. Hayat Tahrir Al Sham (HTS) an Al Qaida offshoot in Syria, formerly known as Jabhat Al Nusra is expanding its territory rapidly in Idlib province by over-running 75 per cent of area held by the armed Syrian opposition. In a dramatic takeover in last couple of months, HTS swept through towns and villages in Idlib province taking over full control of the province from Syrian opposition forces. Even HTS didn’t stopped here they also entered in the adjoining areas of Aleppo province. They recently entered in new areas like- Sahl Al Ghab, a fertile valley and Shahshabo Mountain in the western countryside of Aleppo. Moreover, HTS also occupied town of Daret Izza, located 30km north-west of Aleppo. So definitely in northwest Syria Jihadi forces are on rise even ISIS has lost the war in eastern Syria. Policy makers in west remain solely focused on defeating ISIS but unfortunately ignored Al-Qaeda.

HTS subscribes to the Salafist school of thought same that of Al-Qaeda. The group imposed strict Islamic rule in areas it controls and civilians in these areas say the group’s practices are similar to those of Islamic State. Hayat Tahrir Al Sham host significant number of foreign fighters including Arabs, Turks, Chechens, Uzbeks, and Muslims from China’s Xinjiang province. The group’s attitude toward heterodox minorities like the Druze and Alawites never changed. There is, for example, a small community of Druze in northern Idlib whose inhabitants were forced to convert to Islam by HTS predecessor Jabhat al-Nusra in 2015. Even now, complaints of discriminatory treatment of minorities in areas controlled by HTS are widely reported. Among the top HTS leaders there are many very senior al-Qaeda cadres who are committed to Al-Qaeda ideology of global jihad including its chief Abu Muhammad al-Golani. Even HTS predecessor Jabat al Nusra harboured al-Qaeda’s external operations arm, known as the Khorasan Group which was planning attacks against West. It should be noted that Hayat Tahrir Al Sham is no different to Al-Qaeda it’s just the old wine in new bottle. HTS tried to showcase through various mergers with other groups that it has ended its affiliation with Al-Qaeda but definitely this merger exercise did not indicate an ideological split with Al-Qaeda but was part of a strategy to increase the group’s appeal within Syria.

The emergence of HTS as the most dominant group in northwest Syria yields a number of advantages for al-Qaeda. As of now Al-Qaeda has a broader coalition, with tens of thousands of fighters who are being exposed to its ideology and outlook. HTS flourished and consolidated its hold over the territories as the focus of the US-led coalition and the Syrian and Russian governments is focused elsewhere in the country. The group is not easy to dealt as in HTS ranks majority of fighters are local Syrians. Hence group fighters know the terrain inside out and are deeply embedded in the areas that they overran. In addition to this in any case, the West’s own ability to tackle and contain Jihadist elements in northwest Syria is rather limited. This is because the West is excluded from the de-escalation framework in the region agreed between Turkey and Russia and is thus barred, among others, from using the airspace to launch precision strikes against the group. It seems like while the black flag of ISIS is being lowered, another may soon take its place the white flag of Hayat Tahrir al-Sham.

It’s a fact that al sham remains a ticking time bomb that arguably poses a greater long-term threat to region and Syria’s stability. Now after one phase of war coming to an end after total collapse of Islamic State caliphate another phase should start with sole focus to finish off HTS even if United States and allies have to coordinate with Turkey and Russia in this regard. As al-Sham and its jihadi extremist network still poses one of the greatest long-term challenges for the U.S. and other Western countries which are trying eradicate extremists from Syria. Amid the confusion of Syria’s kaleidoscopic and multi-sided conflict, one thing remains certain that Hayat Tahrir al-Sham must be isolated, marginalized, and defeated before a stable peace can emerge in Syria.