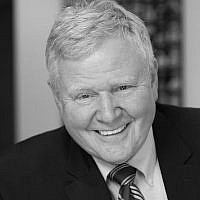 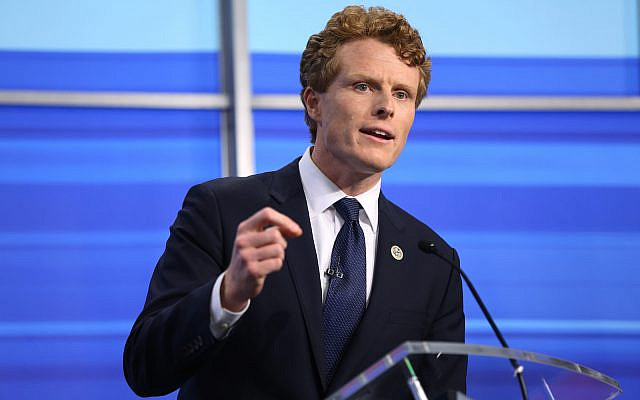 Rep. Joe Kennedy III speaks during a televised debate with Sen. Edward Markey in East Providence, R.I., Monday, June 8, 2020. Markey and his Democratic primary challenger Kennedy sharpened their elbows as they faced off for a televised debate Monday evening. (Jessica Bradley/WPRI-TV via AP)

During the spring of 1968, Robert Kennedy campaigned in presidential primary elections throughout the United States. I remember those times very well. A time of political dislocation, violence, mistrust and alienation; great division and polarization. A time very much like our own.

But Robert Kennedy had a unique ability to bring people together and to speak to the heart of America to the “better angels of our nature.” Wherever he went crowds followed him, impoverished Americans in Appalachia and African Americans and Asian and Hispanic Americans all saw hope and the possibility of working together to build a better and more just society. And I believe with all my heart that he would have succeeded if he weren’t cut down by an assassin’s bullet, leaving us emotionally devastated, politically bereft and adrift.

In these times unity, moderation, healing, the restoration of civil discourse and an end to polarization are no less important than they were in 1968. Most of us in the Jewish community and beyond yearn for decency and moderation, humane immigration policies, caring and support for those with physical and mental disabilities, better health care, intelligent environmental policies and an end to racism. Our community needs a powerful voice in the senate who will effect change without further polarizing our nation. Future generations deserve representation from leaders who are not bent on further splintering the Democratic Party, demonizing Israel, and polarizing our nation.

Joe Kennedy is the right person to represent the yearning of our nation for change and also healing and an end to polarization. He has taken a leading role in every social issue of importance to our Jewish community. He was a sponsor of the Green New Deal and a defender of black lives long before it became a slogan. He was a powerful voice for immigrant rights and against the demonization of asylum seekers. He was an outspoken advocate for the poor, the disabled, abandoned, and an especially powerful voice for the mentally ill. All at the heart of our Jewish ethic of Tikkun Olam and love for the stranger and support for the oppressed in our society. He did all this without allying himself with the extremes of the Democratic Party who foster a view of the world that is deeply divisive and that demonizes and vilifies Israel. Joe Kennedy has never wavered in his support of Israel or his opposition to those who would demonize and delegitimize her very existence.

Senator Markey has had a good record in support of Israel. His campaign however has made a concerning shift by welcoming and featuring support from individuals and organizations with highly divisive and polarizing approaches to Israel, our country and our world and all that goes with it, socially, politically, and economically.

The far left wing of the Democratic Party, as exemplified by Ilhan Omar has been frighteningly successful in a number of recent primaries and is making a bid to dominate the future of the Party. While reasonable people can argue against or support many of their domestic policies they seem highly committed to only one foreign policy objective: the demonization of Israel and the marginalization of Israel’s supporters within the Democratic Party. If they succeed they will effectively end bipartisan support for Israel’s security. The Markey campaign has featured support from people like Linda Sarsour and from groups that actively support BDS, effectively empowering them and magnifying their voice and their influence. It’s important that Democratic candidates reject support from these voices and that we work together to be sure that moderate pragmatic pro-Israel voices remain relevant in Democratic Party and in future Democratic administrations.

Joe Kennedy will be a powerful voice in that effort. He has a growing national reputation as a leader and will be an influential voice for the future of the Democratic Party. He was a tireless and much sought after campaigner in the last congressional elections. Joe Kennedy was invited into 20 congressional districts around the country and his name and his message mattered for many winning moderate Democratic congressional candidates.

In the end when this election is over our task will be to fix the massive challenges we now face, end the divisive and polarizing politics that is shattering our country and bring us all back together in civil debate and dialogue free of racism and demagoguery on the far right and left of the political spectrum. To do this the Democratic Party will need a new generation of leadership to rebuild itself and our country. Joe Kennedy is an important potential force in this effort and a significant leader for the future of the Democratic Party.

We are once again at a time of deep crisis, polarization and partisan division. We require leadership with the courage to resist the demagogues of the right and the left who only seek to gain power by dividing and polarizing our country. We need a pragmatic vision for a better future, free of racism and antisemitism, sensitive to environmental concerns, welcoming to the immigrants who have always been crucial to the energy and creativity of our nation, who can restore our sense of national unity and purpose. We will badly need Joe Kennedy, his warmth and vision to work with many others like him to bring us through this time to a brighter future.