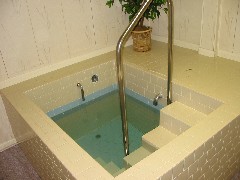 In the summer of 1973, I participated in a learning program with Rabbi Joseph D. Soloveitchik (1903-1993) for his summer Talmud lecture series in Brookline, MA. The actual shiurim took place in the early afternoon at the Maimonides School, but many of us spent the morning preparing at the New England Chassidic Center, Shteibel of the Bostoner Rebbe, Rav Levi Yitzchak Horowitz (1921-2009).

From Monday through Thursday, I arrived at the Shtiebel between 7:15 and 7:30, too late for the 7 AM minyan and too early for the 8 AM. So, I sat in the basement learning while waiting for prayers. Almost every morning around 7:45, the Rebbe, dressed in a bathrobe, came down the stairs, with a big smile on his face and a towel over his arm. He would turn to me and say, “Care to join me for a dip?”  My part in this daily scene was to thank him and demur. Somehow, it never got stale.

The Rebbe played a large part in the Mikve revolution, which I began discussing last week. I previously discussed the roles of Rabbis Lamm and Tendler in the newfound comfort with discussing TAHARAT HaMISHPACHA, Jewish Laws of Family Purity. It was one thing to be more open to discussing this once taboo topic; it is something else to get women to fulfill the mitzva of immersing in the Mikve. It required a few pioneers to get the Mikve revolution off the ground, or into the ground.

Famed Jewish historian Jonathan Sarna of Brandeis University described the efforts of the Bostoner Rebbe to make a beautiful new Mikve available in Brighton, MA for the women of Greater Boston:

I remember how that was advertised. They were very proud of how luxurious it was. The Bostoner was American born and understood the world of American women, that this must be modern, at least according to standards of the ’60s.

The Daughters of Israel Mikve was a revolution. The previous Mikve had been in the inner city and was miserable in every sense of the term.

Actually, the first modern American Mikve built in a nicer suburban neighborhood was in North York, Ontario, outside Toronto in 1960. It wasn’t long before this became a trend, and then a movement.

First generation Jewish immigrants to America built Mikvaot. In New York, the Mill Street shul (part of the Spanish Portuguese Synagogue line of descent) had a mikve by the 1740’s, because women no longer wanted to immerse in the local rivers. Philadelphia’s Mikve Israel had one by 1786, and Charleston, SC in 1809. Archeologists have unearthed a mikve in Baltimore from the 1840’s, and one in Southeastern Connecticut from the early 20th Century. Buffalo had one by 1847. But the second-generation of Jewish immigrants wasn’t interested, so many of these early Mikvaot either disappeared or were rarely used. Rabbi Joseph Ehrenkranz OB”M told me that when he came to Stamford in 1948, there was one woman using that city’s mikve.

But by the 1960’s two groups wanted mikvaot. The newly enthusiastic Jews of the revitalized segment of the third-generation immigrants and the new immigrants who came after the War.

However, this revolution took time to develop. Even as mikvaot became more available by the 1970’s, mikve attendance was still relatively modest.

Enter the Lubavitcher Rebbe. In 1974, Reb Menachem Mendel Shneerson (1902-1994?) gave an speech at 770 Eastern Parkway, Crown Heights, Brooklyn. In this famous address, the Rebbe visibly cried while beseeching women to use the mikvaot which already existed and imploring the Shlichim (emissaries) to build beautiful, new mikvaot where ever they were representing the Movement. This became one of the famous ‘campaigns’ of the Rebbe,

I find it fascinating that Conservative Jews have also come to see the importance of Mikve. In December 2006, the Committee on Jewish Law and Standards of Conservative Judaism reaffirmed a requirement that Conservative women use a Mikve monthly. Even more liberal movements (Reform, Reconstructionist) have encouraged immersion for greater spirituality for men as well  women.

The Bostoner Rebbe’s invitation for a dip has been heeded.

Next: Where have all the minyans gone?