You have a structure. So says Jordan Peterson, though not in as many words. He alludes to your structure when he tells you to stand up straight with your shoulders back. Or when he encourages you to pull yourself into alignment, to organize the various sub-composite parts or drives that you find within so that they function in a unified, orderly manner.  He  intimates the existence and nature of that structure when he urges you to tell the truth, when he asks where you are aiming yourself or when he encourages the trait of conscientiousness.

What is this structure? Put simply, it is the straight line. You are meant to be an ambassador of the line, to walk the straight and narrow, to be straight forward in your dealings, to straighten yourself out.

Ever notice how you sign your name? You move from the personal self, to the public self; you pen your first name, then your last, in an expression that stretches across the page like the line that you are! Even our signatures bear testimony to our structure! 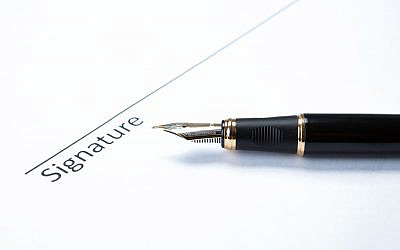 Your signature is an expression of your linear nature, and therefore requires you to sign on the (usually) dotted line! Image from Canva.com

Now, initially that structure is not in place. If you read the creation account in Genesis, you might come to the conclusion that creation projects (including, but not limited to, self-creation) always start from a position of chaos. Ordering is required to properly bring creation to fruition.

Referencing the account in Genesis, Rabbi Moshe Shapiro writes in Words of Survival:

We were created within an existence that is desolate and empty. Each of us enters an initial state that is devoid of form, and our task is to give it form. All that we receive, we must accept as uninformed matter and establish its true form (p. 3).

And what is that true form? If our upright posture is any indicator, if the shape of bones, fingers, spine – long and narrow – have something to teach, we are meant to follow the mandate of the straight line. That means we must undertake endeavors that are characterized by the stages of beginning, middle and end, aka the three points on the line.

If you fail to live true to the structure you are meant to emulate, you flail around. Writing in the voice of a semi-autobiographical character, Carrie Fisher wrote, “I shot through my 20s like a luminous thread through a dark needle, blazing toward my destination: nowhere” (1987, p. 16). 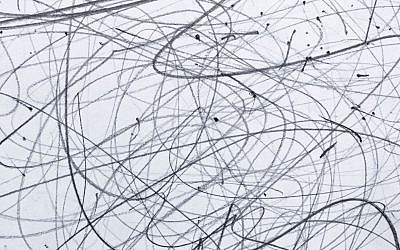 Fisher’s image of the luminous thread which curves and flies is juxtaposed against the image of the dark, straight, needle. The archetype of the line is elusive to this character who struggles with a lack of stability

Peterson encourages each of us to avoid this outcome by having us look at where we are aiming. Your linear nature inclines you to project along the trajectory of where you aim. Figure out where that is. Make sure it is a good destination. Don’t be like Chrissy, a Lily Tomlin character who reflects, “All my life, I always wanted to be Someone. Now I realize I should have been more specific.”

Peterson’s insights can help you sort yourself out. In so doing, you pursue an outcome that is endorsed by the Judeo Christian tradition: being aligned in deed, thought, and action, being singular in purpose versus working chaotically to promote and simultaneously undo stated goals.

In the Jewish vernacular, everything linear associates, first and foremost, with the Creator. The Tetragrammaton, the 4 letter name of the Divine, is an amalgamation of the verbs ‘was’, ‘is’ and ‘will be’. See? the three points on the line. The Hebrew word for truth, Emett, is a 3 letter word, comprised of – you got it – the first, middle and last letters of the Hebrew alphabet. In that order, of course.

I’ve been excited about Peterson’s work because many of his insights resonate with those taught within the Jewish tradition. Or to put it another way:  Jordan Peterson works hard to give you a good Jewish education!

In fact, his work, in tandem with that of a Jewish notable, Rabbi Dr. Akiva Tatz, allow us to learn out what the concept of the line – and that of beginning, middle and end  – teach us about how we can succeed in life. Their work prompted my project, now a book: In Good Standing: Using Jordan Peterson’s Insights about the Structure of Self to Sort Yourself Out.

Now, a new Jewish year, is the perfect time to get your ducks in order. Figure out where you are aiming. Be the avatar of the line, not that of the snake, whose curvy trajectory represents the unreliable trajectory of those who careen off track, succumbing to one temptation after another.

The line heralds a healthy identity, stable emotions, good orthopedic health. Without the line we may fall into an opposite state, becoming ‘crooked’, weak, spineless. And in so far as many of us want to make this world a better place, we best take heed the insight of Carl Jung: “We have a justification for missionizing only when we have straightened ourselves out here, otherwise we are merely spreading our own disease.”

5781, the new Jewish year, presents you with obvious best choices: Stand tall. Thrust forward. And think about ways that you can tow the line, your birthright, your progenitor, your destiny.