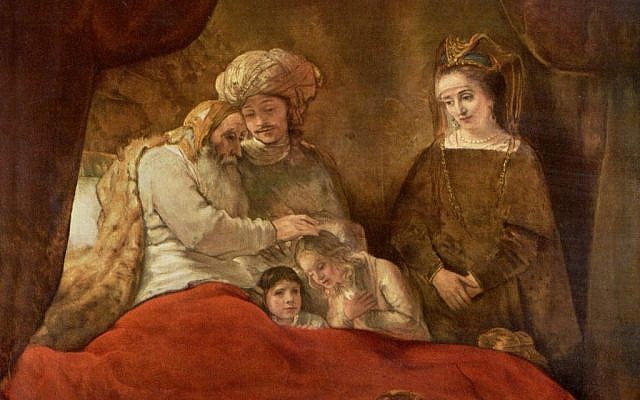 And now thy two sons, who were born unto thee in the land of Egypt before I came unto thee into Egypt, are mine; Ephraim and Manasseh, even as Reuben and Simeon, shall be mine.  And thy sons, that thou begettest after them, shall be thine; they shall be called after the name of their brethren in their inheritance.  And as for me, when I came from Paddan, Rachel died unto me in the land of Canaan in the way, when there was still some way to come unto Ephrath; and I buried her there in the way to Ephrath—the same is Beth-lehem.”  And Israel beheld Joseph’s sons, and said: “Wherefrom are these?”   (Gen.  48:5-8)

The above narrative in the Torah portion Vayechi is quite perplexing.  It starts with a shocking pronouncement by Jacob that two sons of Joseph—his grandsons, Ephraim and Manasseh —are not to be counted as sons of Joseph but as children of Jacob. Then the narrative takes 90 degrees turn and digresses to the seemingly unrelated story of the passing and burial of Rachel, Joseph’s mother. Then the narrative returns to the subject at hand— the blessing of Joseph’s sons—with an even more astounding question, “Who are these” or “Wherefrom are these?” Several questions come to mind as we read this narrative:

Rushi’s commentary doesn’t answer any of these questions. Rashi says that Jacob tells Joseph about the passing of his mother because he is concerned that Joseph kept a grudge against him: he is asking Joseph not to bury him in Egypt, but in the family burial plot, Maarat HaMachpelah in Chevron, while Jacob, himself, failed to do this for Joseph’s mother, Rache, who was buried on the way to Ephrath. Not only this does not explain why the Torah digresses from the main narrative of blessing Joseph’s sons, it makes the question even stronger. Indeed, the conversation between Jacob and Joseph when Jacob makes Joseph swear that he’d not bury him in Egypt but will bury him in the family burial cave, Maarat HaMachpelah, took place in the beginning of this Torah portion.

And the time drew near that Israel must die; and he called his son Joseph, and said unto him: “If now I have found favour in thy sight, put, I pray thee, thy hand under my thigh, and deal kindly and truly with me; bury me not, I pray thee, in Egypt. But when I sleep with my fathers, thou shalt carry me out of Egypt, and bury me in their burying-place.” And he said: “I will do as thou hast said.”    (Gen.  47:29-30)

Let us start with the first question. Why did Jacob declare Joseph’s sons, Ephraim and Manasseh, his own? This is unprecedented in the Biblical narrative. To explain to Joseph his motivation for this highly unusual pronouncement, Jacob recalls the passing of his wife, Rachel. This is relevant because, after Rachel’s passing, Jacob moved in with his other wife, Bilha. Jacob was destined to have twelve sons. At that time two more sons were destined to be born to Jacob. Two souls were hovering, as it were, over Jacob’s bed ready to be born into this world. However, Reuben, Jacob’s firstborn, stood up for the honor of his mother, Leah, and moved Jacob’s bed into Leah’s tent. Buy doing so, he interfered with the destiny. As I discussed in my essay, “Korach Disentangled,” these two souls were later born to Jacob’s son, Joseph, as Ephraim and Manasseh. This is why Jacob rightfully claims these two boys as his own, as they had been destined to be born to him.  This also explains why the passing of Rachel was relevant to this story.

We still have the question, what are we to make of Jacob’s question “Who are these?” or “Wherefrom are these?” Let’s look at the original text of the Torah. In Hebrew, Jacob asks, “?מִי-אֵלֶּה” – mi eleh, lit., “who (or from where) are these”? Notice that the word “אֵלֶּה”—eleh (Heb. for “these”) has the same letters as Leah—“לאה.” On the homiletical level of drush, don’t read the expression “?מִי-אֵלֶּה” as “Who are these?” but read it as a rhetorical question “From Leah?!” Being that Joseph was a son of Rachel, Jacob expected to see the souls of Joseph’s sons rooted in the soul of their grandmother Rachel. Instead, seeing their souls rooted in the soul of Leah, Jacob explained, “From Leah?!”

Twelve sons of Jacob were prophets in their own right. I now tend to think that Reuben moved his father’s bed into the tent of Leah not only because he wanted to protect his mother’s honor. But, as a prophet, he too saw these two souls hovering ready to be born to Jacob. He further saw that they were destined to be born not to Jacob and Bilhah, but to Jacob and Leah, which is why he moved Jacob’s bed into the tent of Leah. Instead of interfering with destiny, all Reuben wanted to do was help facilitate this destiny!

The only question we are left to resolve is how did two sons of Joseph acquire the souls rooted in the soul of Leah to whom they were, seemingly, not related? The answer comes from the Midrash, which says:

…and he [Shechem] seized her [Dina], and he slept with her, and she conceived and bare Asenath…  He [Jacob] wrote the Holy Name upon a golden plate, and suspended it about her neck and sent her away. She went her way. Everything is revealed before the Holy One, blessed be He, and Michael the angel descended and took her, and brought her down to Egypt to the house of Potipherah; because Asenath was destined to become the wife of Joseph. Now the wife of Potipherah was barren, and (Asenath) grew up with her as a daughter. When Joseph came down to Egypt he married her.   (Pirke De-Rabbi Eliezer, ch. 38)

A very similar story is recorded in Midrash Aggadah (Gen 41-45).

Now, all peices of the puzzle fit together. Yes, Ephraim and Manasseh were grandsons of Leah, which is why Jacob exclaimed in amazement, “are these from Leah?” Joseph replies, “They are my sons, whom God hath given me with this.”  The last words in the verse, “with this,” compels Rashi to suggest that Joseph showed Jacob his marriage contract, Ketubah, with Asenath. I suggest a different interpretation. “With this” in Hebrew is “בָּזֶה” (BaZeH). These are the same letters that make up the word for gold, “זהב” (ZaHaV). What Joseph may have shown his father was the golden plate that Jacob put many years ago on the neck of Asenath. When Jacob recognized the plate and realized that Joseph married a Jewish girl from his family, Jacob’s granddaughter, the daughter of Leah, he became happy and proceeded to bless the lads.

Originally published on Jan 15, 2017 on www.QuantumTorah.com.