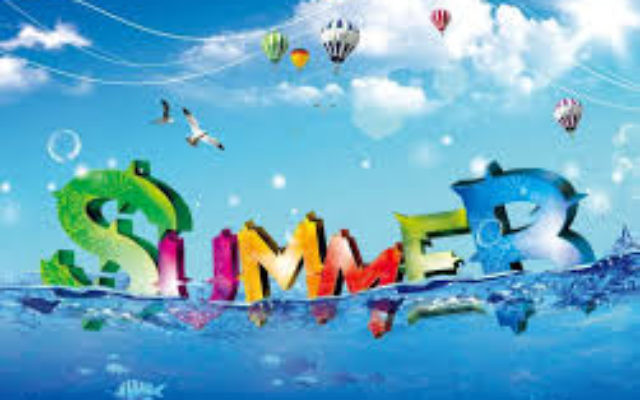 What Would You Do?

If nothing stood in your way, how would you spend your summer? Would you embark on a dream vacation? Would you learn a new trade? Would you escape to a faraway island?

For Jews worldwide, the summer season is spent in unique, and perhaps, challenging ways. A while ago, a friend complained to me that he finds the “Jewish summer” very frustrating. “Look at our summer,” he said half-jokingly. “For seven weeks (beginning on the second day of the holiday of Passover), we count the days leading to the festival of Shavuot; for three weeks, we mourn the destruction of the Jerusalem Temples; and for the remaining four weeks, we repent in preparation for the High Holidays.”

“You’re right,” I told him. Quoting Andre Naher, a 20th century French-Jewish philosopher, I added: “‘it’s a difficult pleasure to be a Jew.’” Yet, cynicism aside, we ought to echo his question: Why would our tradition fill our fun-filled summers with such restricting limitations?

The Summer Sunshine and its Great Burst of Leaves

In The Great Gatsby, Fitzgerald has a moving description of the summer season: “And so with the sunshine and the great bursts of leaves growing on the trees… I had that familiar conviction that life was beginning over again with the summer.” Indeed, this season teems with a new sense of life and brims openness and freedom.

But these are not always good things. Reports show that crime goes up when temperatures do, and cases of marital infidelity also soar during this time of the year. This may be due to the extra time that people have on their hands throughout this season, along with the inviting openness of the summer that drives people outside of their home. “More people spend time outside when the weather is nice, which can facilitate everything from pickpocketing to gang violence,” a reporter suggested recently.

These reports reflect an obvious truth: freedom without purpose ceases to exist. And unless we have a purposeful plan in play, we will struggle to find direction and meaning in the open freedom of the summer. And here lies the secret of the “Jewish summer plan,” which summons us to embark on a three-step journey of counting, mourning, and atoning.

Step one; we must begin with valuing time. Every moment is precious. Every tick of the clock is filled with opportunities. There is so much life in the present that we ought to make the most of it before it vanishes. The Jewish summer begins with the counting of every day for seven continuous weeks. “Time is the best teacher,” a wise man once said, “but unfortunately it kills all of its students.” The only way to avoid being “killed by time,” especially during this season, is to count and put into use the full value of its every day.

Step Two: Connecting the Past To The Present

Step two; for three weeks, we mourn the historic tragedies of years gone by, and connect to our spiritual roots. These are the weeks when many tragedies befell the Jewish people including the besiegement and destruction of the Jerusalem Temples in the years 586 B.C.E and 70 C.E, and the expulsion of Jews from Spain in the year 1492.

This connection to the past during the “Jewish summer” ensures that we are not left squandering aimlessly in search of a meaningful direction toward the future. It bolsters our identity and guides us onward with clarity and focus.

Step Three: A Return To the Self

Step three; we are invited to repent, better – to return, during the final four weeks of the Jewish summer. Jewish law calls upon us to awake from our spiritual slumber, inspect our actions, and return. In order to experience a fulfilling summer, we ought to return to our true selves.

In our age of distractions, this lesson holds particularly true. The “Jewish summer” encourages us to rid ourselves of the fantasy that life’s blessings, such as peace and happiness, can be found outside. We ought to re-focus on who we truly are, and what our personal mission statements ought to be. The unleashed potential of the individual self, and all of its God-given talents and skills waiting to be realized, are irreplaceable.

Looking At Life from The Inside

Shirley Turkle, the Professor of the Social Studies of Science and Technology at MIT, recently shared an interesting observation: “Not too long ago, people walked with their heads up, looking at the water, the sky, the sand and at one another, talking. Now they often walk with their heads down, typing. Even when they are with friends, partners, children, everyone is on their own devices. So I say, look up, look at one another…”

She is undoubtedly right. We certainly need to look up at one another, and connect uninterruptedly with genuineness and depth. But before we look upward, we would do well to first look inward, and make certain that we are making use of our time, and our inner self, to the best of our ability.

About the Author
Rabbi Pinchas Allouche is the founding Rabbi of Congregation Beth Tefillah in Scottsdale, Arizona, where he resides with his wife, Esther, and nine children. He is a respected rabbinic figure, a renowned lecturer, and a prominent author of many essays on the Jewish faith, mysticism, and social-criticism. Besides his academic pedigree, Rabbi Allouche is richly-cultural, having lived in France, where he was born, South Africa and Israel. He is also fluent in English, Hebrew, French and Italian. Rabbi Allouche is a member of AIPAC's National Council, and a member of the Vaad Harabanim, the Orthodox Rabbinic Council of Arizona. Rabbi Allouche's wise, profound, and sensitive perspective on the world and its people, on life and living, is highly regarded and sought-after by communities and individuals of all backgrounds. Rabbi Allouche is also tremendously involved in the Jewish community of Greater Phoenix, and he teaches middle-school Judaics at the local Jewish Day School. Rabbi Allouche is also a blogger for many online publications including the Huffington Post, and The Times of Israel. Rabbi Allouche was listed in the Jewish Daily Forward as one of America's 36 Most Inspiring Rabbis, who are "shaping 21st Century Judaism." Rabbi Allouche can be reached at: Rabbi@BethTefillahAZ.org
Comments