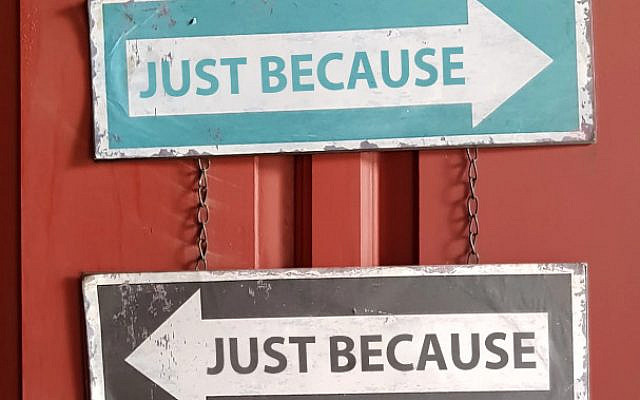 Before the Plague of Hail, Moshe warns Pharaoh that he truly deserves to be killed, but that G-d had said, “Nonetheless, because (baavur) of this I let you endure: in order to show you My strength and so that My name may be spoken throughout the world” (Exodus 9:16). The word for “because” used in this context is baavur. However, since there are two more words in Hebrew which mean “because” — biglal and bishvil — why does the Torah specifically use the word baavur here and not one of the other two? What’s the difference between these three words?

Rabbi Wolf Heidenheim (1757-1832), Rabbi Yaakov Tzvi Mecklenburg (1785-1865), and the Malbim (1809-1879) all explain the difference between baavur and biglal based on the logic above. Indeed, both words mean “because” in English, but each one means a different type of “because”. They explain that biglal refers to a “because” which calls for a pre-existing factor that justifies a certain action. On the other hand, baavur refers to a factor which does not yet exist, but is the anticipated result of the action.

The word bishvil can literally mean bi-shvil (on the road), which might be a metaphoric way of relating to the relationship between a cause and effect. It does not appear in the Bible, but does appear in later, Rabbinical writings. For example, the word bishvil appears close to fifty times in the Mishna. While it usually bears the same meaning as the Biblical biglal, in at least one case it means the same as baavur (see Bava Metzia 5:10). Interestingly, both biglal and baavur never appear in the Mishna, except that the latter appears once in a Biblical verse cited by the Mishna. For some reason the fashioners of Modern Hebrew favored the word bishvil over the two Biblical words, and that has become the catch-all word for “because” in popular speech.

Going back to the case of Pharaoh we can now understand why the Torah uses the word baavur and not biglal or bishvil. First of all, the word bishvil is out of the running because it never appears in the Bible. Secondly, the word biglal refers to a pre-existing reason for the action under discussion. In our passage there is no pre-existing reason for Pharaoh’s life to be spared. He had no merits or other redeeming qualities which should save him from the punishment he deserved. The only reason why G-d wanted to save Pharaoh was so that in the future Pharaoh may speak of G-d’s power and spread awareness about Him. Since the reason for saving Pharaoh was the anticipated future outcome of doing so, the Torah uses the word baavur.

Indeed, the Midrash (Pirkei de-Rabbi Eliezer chapters 42 & 43) relates that Pharaoh survived the Plague of the Firstborn (even though he was a firstborn) and the Splitting of the Red Sea (even though the rest of his army drowned). He somehow ended up a castaway who eventually came to the city of Ninveh. There, he (or perhaps his descendants or reincarnation) rose to a prominent position and roused its sinful inhabitants to heed the Prophet Jonah’s warnings to repent.