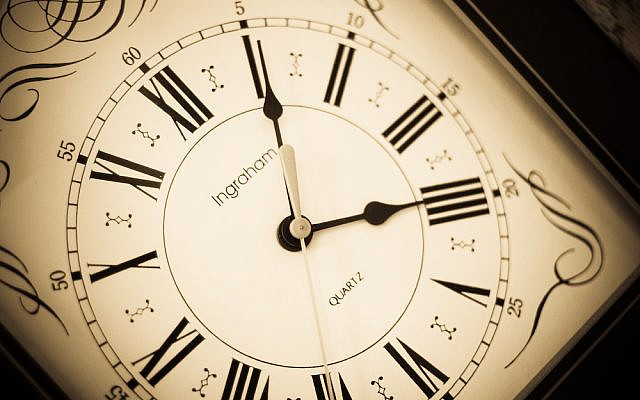 Continuing our essays on synonyms related to the concept of time, we shall now meet the words for “now”. There are three words for “now” in Hebrew, and four in Aramaic. In Hebrew we find the words atah, na, and achshav that all mean “now”, while in Aramaic we find the words ke’an, ke’don, hashta, and ha’idna. In the following paragraphs we will explore the etymologies of some of these words and attempt to demonstrate how their technical meanings might differ from one another.

The most common Hebrew word for “now” in the Bible is atah — it appears more than 430 times. Atah is related to the Hebrew word eit (“time”) because its first two letters are ayin-tav, which spells eit. The next most common word for “now” in the Bible is na (spelled nun-aleph). While that word might sometimes mean “raw” or “please”, its primary meaning is “now”. The connection between “raw” and “now” is fairly obvious: If I must eat my food now and I cannot wait until it is fully-cooked, I will end up eating it raw. Interestingly, the English word “now” possibly comes from the similar-sounding Hebrew word na.

The third Hebrew word for “now” is achshav. This word never appears in the Bible, but it appears quite frequently in rabbinical writings and has been adopted by Modern Hebrew as the principle word for “now”. Remarkably, the earliest documented instance of the word achshav is in the Dead Sea Scrolls (specifically in the scroll designated 4Q225). The famous Talmudic linguist Dr. Marcus Jastrow (1829-1903) proposed that the word achshav is a contraction of the phrase atah kemo shehu (“now, as it is”). If this is the case, then achshav is not quite a synonym of atah, but is actually based on that word and denotes a slightly different idea. (Parenthetically, Rabbi Eliyahu HaBachur (1469-1549) writes that he has seen some people spell the word achshav with a yod as the penultimate letter, but deems such an insertion of the letter yod unnecessary.)

The word ke’an is the only Aramaic word for “now” which appears in the Bible (that is, the Aramaic parts of the post-Exilic books Daniel and Ezra). It is also the usual word that the Targumim use for translating atah and na. Like his explanation of achshav, Jastrow argues that ke’an is also a contraction or abbreviation of the Aramaic word ke’idana (literally, “according to [this] time”), as is the related Aramaic word ke’don.

Looking at words for “now” as contractions is not Dr. Jastrow’s innovation, as Rabbi Wolf Heidenheim (1757-1832) already offered a similar idea in his Rödelheim Machzor. There he writes that the Aramaic word hashta is a contraction of the two word Aramaic phrase ha shaata (“this hour”), which conceptually means the same thing as “now”. It is interesting to note that a certain Aramaic passage in the Haggadah recited on Passover night reads “now (we are) here (i.e. in exile), next year (we will be in) the Land of Israel”, and a disagreement arose between different authorities over whether the term for “now” should be hashta or ha shaata.

Even before Rabbi Heidenheim, Rabbi Binyamin Mussafia (1606-1675) wrote that the last word for “now” in Aramaic, ha’idna, is a portmanteau of the term ha idana (“this time”), which is more or less the meaning of “now”. However, the Aramaic words idan or idana are spelled with the letter ayin appearing as the first letter, while the word haidna is spelled with an aleph, instead of an ayin.