A friend of mine has the patience of an angel. That friend took the initiative to call Jewish Voice for Peace, gently asked them some questions, and did not laugh at their answers. I could not have done it, especially the “not laughing” part.

My friend’s patience and tenacity allowed me to piece together a top-secret document. The document, never previously revealed to the general public, consists of the two instruction sheets that JVP provides behind closed doors to its calling center staff. 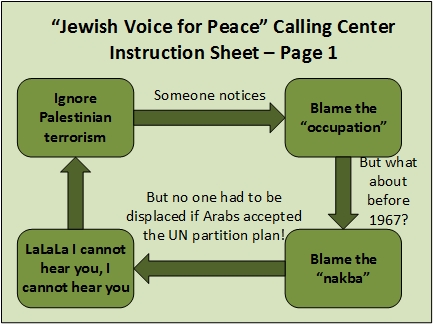 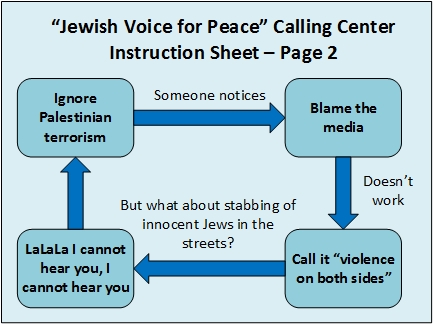 The following is my friend’s phone conversation with a JVP call center staff member, which my friend kindly allowed me to listen to while it was taking place.

Caller: Hi! How are you?

JVP: Okay, thank you. What can I do for you?

Caller: I have been scrolling through your page on Facebook, and I just have a few questions. Is that okay?

Caller: I see that your mission statement is to have peace between the Israelis and the Palestinians. Correct?

Caller: My question to you is this. Why do you show everything against Israel, and you never report anything the Palestinians do in terms of violence or terror against the Israelis. I am sure you know that many Israelis have been stabbed and brutalized the past months, but I haven’t seen one post on your Facebook page regarding that.

JVP: We find that U.S. reporting is only about violence against Israel, so we are trying to show what isn’t being reported.

Caller: So, if I understand correctly, you are saying that you never mention that Israelis have been brutalized and stabbed in streets?

JVP: Sometimes we do. It’s not that we don’t ever! We do acknowledge both.

Caller: I have been following your page for over a year now, and when you do post about Palestinian terrorism, you say that it is because of the occupation.

JVP: That is why.

Caller: You honestly believe that?

Caller: There were just 14- and 16-year-old Palestinian girls who stabbed innocent bystanders in Israel. That’s just because of the occupation? That’s not because they were taught to stab Jews?

JVP: The root of it has to do with the occupation. That’s our understanding.

JVP: Well, Israel was established against the will of the people who were already living there.

Caller: Hmm. Okay, but that doesn’t answer my question though.

JVP: I think it does, as far as why there would have been unrest.

Caller: But Israel was established by international law.

JVP: Against the will of the people who were already living there though, yes.

Caller: I am trying to understand that. What do you mean by the will of the people?

JVP: (long silence) That the people living on the land didn’t necessarily want to move.

JVP: I think that’s idealistic, and that’s not what happened.

JVP: I feel that we have different perspectives, and I am not sure where this is going.

JVP: We (pause) have (pause) condemned (pause) violence against civilians.

Caller: I don’t see that though. I look at your page every single day, and I don’t see it. I would love to see it. If you can prove me wrong, I’ll admit that I was wrong.

JVP: (long silence) If you want, I can take down your contact information, but I am not sure what good it’s going to do.

Caller: I also hear from you that you call it violence. You don’t call it terrorism. That’s also perturbing. You don’t think that stabbing Jews in the street is terrorism?

JVP: (long silence) I don’t think I want to go down this road. I don’t see any point. I just think we have different perspectives on this.

Caller: That’s fine. I am not here to get it into any arguments. I just find your page very one-sided, which is ironic because you say that the U.S. media is one-sided. I also have a problem with you using the word violence instead of terrorism. The definition of terrorism is the act of terrorizing innocent people for political goals. Right? Inflicting fear on a civilian population.

Caller: Okay, thank you so much.

JVP: Thank you for your call.

The only JVP lie that my friend did not refute outright is the claim that the U.S. media is biased in favor of Israel. In fact, there is strong bias against Israel by much of the U.S. media. This fact has been proven by, among others, Honest Reporting, an organization that exposes media bias against Israel. They have, for example, exposed The New York Times, The Watertown Daily Times, CNN, and NBC News.

This leaves JVP exposed as a fraudulent organization that claims to support peace but that in fact supports terrorism by peddling lies about Israel.