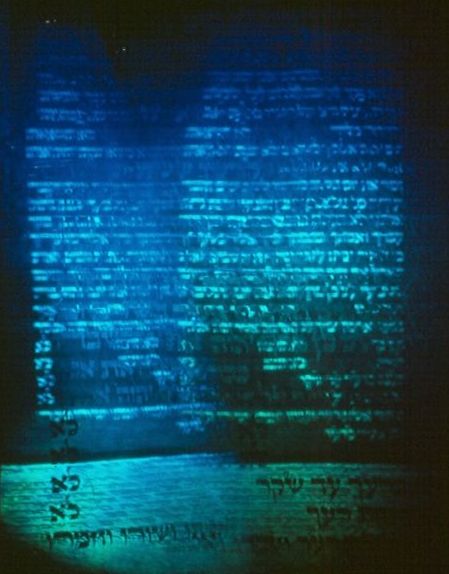 The image above is a computer-generated hologram combining the two biblical versions of the Ten Commandments created by Mel Alexenberg in collaboration with scientists at MIT.

In The Language of New Media, Lev Manovich identifies the first principles of digital media as numerical representation and modularity, both central to the kabbalistic paradigm.

“Numerical Representation.  All new media objects, whether created from scratch on computers or converted from analog media sources, are composed of digital code; they are numerical representations.  Modularity.  This principle can be called the ‘fractal structure of new media.’  Just as a fractal has the same structure on different scales, a new media object has the same modular structure throughout.  Media elements, be they images, sounds, shapes, or behaviors, are represented as collections of discrete samples (pixels, polygons, voxels, characters, scripts).  These elements are assembled into larger scale objects but continue to maintain their separate identities.”

The principle of modularity and fractal structures parallels the kabbalistic concept of interinclusion in which all ten sephirot are included in each sephirah (singular form of sephirot) like the branching patterns of a tree repeated in the venation patterns of its leaves.  Interinclusion mirrors the holographic concept that all the information is contained in each part of a hologram.  In a hologram cut apart with a scissors, the whole picture can be played out with laser light from each part, unlike a photographic image cut into pieces.  Understanding new technologies helps us grasp the ancient wisdom of how the 32 information elements (ten sephirot and 22 letters) in the kabbalistic paradigm interrelate in myriad ways in the process of creating new worlds.

Sepher Yetzirah: The Book of Creation, is considered the oldest and most mysterious of all kabbalistic texts.  “With 32 mystical paths of Wisdom,” the book begins, “the Holy One created His universe with three sepharim, with sepher (form), with sephar (number), and with sipur (process).”  We have discussed earlier the SPR root of SePheR Torah, the Torah scroll, and the significance of the SPiRal scroll form in conveying the message of endless flow, of inSPiRation and SPiRituality.  In The Book of Creation, SePheR refers to the form of each Hebrew letter and the meaning the form conveys.  The first letter of the Torah is bet, which is the prefix “in” as “In the beginning” (Genesis 1:1).  Its form is a square open on the left side, like a house with an open door.  The top horizontal line of bet symbolizes heaven, the bottom line earth, and the right vertical line draws heaven down to earth.  The entire Torah flows out from the open side.  As mentioned earlier, the negative space around the letter bet forms the letter pei, which means mouth, a metaphor for the divine mouth uttering the words of the Torah.

SePhaR is the numerical value of each letter (related to the word “cipher”).  Using the gematria system, we can calculate the numerical values of the biblical Hebrew words to discern spiritual messages from quantitative relationships between words.  Since the Hebrew words for “ladder,” “spiral,” and “Sinai” all equal 130, we learn that the ladder in Jacob’s dream was a spiral ladder like DNA that symbolizes receiving the Torah at Sinai brought down from the clouds to earth. SiPuR means story, letters strung together in words and words sequenced in the biblical narrative of creation, revelation, and redemption.

Parallel to kabbalah’s locating number, form, and process in the spiritual realm, is the significance of number, form, and process in science’s discoveries in natural systems.  Number (sephar) determines the qualities of matter.  The smallest atom with one electron circling one proton is manifest as the gas hydrogen.  Atoms that have four electrons and four protons are carbon, from coal to diamonds.  Six are oxygen, 26 iron, 79 gold, and 92 uranium.  At the molecular level, carbon atoms surrounded by hydrogen atoms strung together like words in a sentence form the paraffin series (CnH2n+2).  One carbon, two carbons, and three carbon chains are cooking gas.  Chains with eight are liquid gasoline, and long chains of twenty carbons are solid candle wax.  If carbon chains become rings, where one end is connected to the other like a necklace, a totally changed material emerges.  A different form (sepher) with the same number of carbon atoms creates a material qualitatively different.

The most important story (sipur) of life on this planet is a process also involving carbon and hydrogen atoms called photosynthesis (6CO2+6H2O —- C6H12O6+6O2).  Molecules of carbon atoms linked to two oxygen atoms enter the leaves of green plants and molecules of oxygen atoms linked to two hydrogen atoms flow up into the plant from its roots.  In the leaves, with the aid of chlorophyll and sunlight, carbon dioxide and water are transformed into glucose and leftover oxygen is released into the air.  Without this process, we would have neither food to eat nor oxygen to breath.  There would be no life on planet Earth.

The number and sequence of four compounds as the rungs of DNA double helix ladders determines a substantial part of our physical and mental traits.  Human beings have 23 pairs of DNA ladders in every cell of our body.  Having three instead of two of the 21st chromosome is expressed as Down’s syndrome.  Having 16 pairs of DNA ladders rather than 23 would make you an onion rather than a human being.  The information for all forms of life from the amoeba to the giant redwoods, from roses to elephants, from bacteria to whales, and from onions to human beings, is written with an alphabet of only four letters like the biblical Tetragrammaton.  They are A for adenine, T for thymine, C for cytosine, and G for guanine.  These letters spell four words: A-T, T-A, C-G, G-C.  Each rung of the DNA is written with one of these words.  The sequence and number of these words determines whether you have blue eyes or brown, whether you will be short or tall, and whether you will be a genius or mentally retarded.  Since all forms of life are written with same the four words, genetic engineering has developed the ability to transpose a DNA sequence from one organism to another to create a new transgenic organism.  The sequence in lilacs that made them purple can modify the DNA of a tomato to create a purple tomato.  The DNA sequence that makes jellyfish glow green in the dark can give other animals or plants that same ability.

For more about the ideas in this Times of Israel blog post, read my books Photograph God: Creative a Spiritual Blog of Your Life (CreateSpace) and The Future of Art in a Postdigital Age: From Hellenistic to Hebraic Consciousness (Intellect Books/University of Chicago Press). See reviews of these books at http://photographgod.com and http://future-of-art.com.

“For those of us familiar with the diverse and exhilarating work of Mel Alexenberg as an artist, educator and profound thinker, this latest book offers precisely the four things we would expect. The narrative thinks brilliantly outside the box. It synthesizes the realm of the abstruse and transcendent with the realm of the concrete and immanent. It crisscrosses disciplines, from science and technology to philosophy and mysticism to art as both historical and creative phenomena. Finally, the entirety is managed in a style both accessible and inviting. Those with prior knowledge of any or all of the disciplines from which Alexenberg draws will smile again and again in affirmation, and those entering without prior knowledge will be thrilled to understand things that they thought might be beyond them. This is one of those books that other thinkers will wish they had somehow thought about how to write, and to which readers of diverse sorts will simply respond by saying: wow!”

Dr. Ron Burnett, author of How Images Think (MIT Press, 2005) and President of Emily Carr Institute of Art and Design in Vancouver, Canada, writes about my book The Future of Art in a Post Digital Age:

“This is a wonderful and important book. The author links the history of art to the important role played by various forms of thinking in the Jewish tradition and connects that to the emerging culture of digital expression. Brilliant insights and new ways of seeing make this a must-read for anyone interested in the intellectual history of images in the 21st Century.”