I can’t complain about life under lockdown. Living on Kibbutz Ketura, a small remote desert community, in a country that is handling this crisis better than most, I am perhaps triply privileged: Safe, remote, in an as-yet-uninfected island of sorts, and with the economic backstop provided by the income-sharing nature of our lifestyle. But much of what makes this place a kibbutz is by definition impossible during a pandemic: We’ve closed the dining room, the pool, the synagogue, and the library, and do not enter each other’s houses. There are absolutely no gatherings of any kind in a community known as a “kibbutz”, which literally translated means “gathering.”

All of this we accept with the equanimity of those who are quite aware of our relative good fortune. But I was particularly disappointed to realize that I was not going to be able to complete the 11 months of reciting the Mourner’s Kaddish for my mother, who passed away last May. Thursday was the evening of the final day of Kaddish, but without the ability to gather the requisite ten worshippers, one cannot recite the prayer. I shared my disappointment with Sarah, my neighbor from across the lawn, while shouting to her from my back porch to her front porch. Having suffered a heart attack last month, Sarah is in a high-risk group, and needs to be particularly careful about social distancing, but she pointed out that if she and her family stand on their front porch, and I and my family on our back porch, with my next-door neighbors on their porch, we would have a minyan.

And this is just what we did: Calling on a couple of other neighbors to stand on the lawn in the middle at a safe distance from each other, just after nightfall on Thursday, I led the evening service with a dozen people who have known me my entire adult life. I am blessed (and sometimes cursed) with a particularly loud voice, so the requirement that a minyan be comprised of 10 Jews who can see and hear each other was not a problem.

My sister Marla (also a member of Ketura) joined me in reciting the Mourner’s Kaddish at the conclusion of the service, and we all went our separate ways with some shouts of support as people re-entered their apartments. Marla and I shared a shot of bourbon (my mother’s favorite drink) in her memory, and then she went home as well.

I am a bit reticent to share this anecdote of finessing the coronavirus restrictions, cognizant as I am of the millions facing far more daunting challenges, from financial ruin to the crushing reality of the disease itself. But this is one of those moments that is playing itself out over and over again in communities all over the world: People are supporting each other during the crisis, neighbors help out a family in need, and friends perform small gestures of kindness.

My mother suffered from Alzheimer’s, and declined over the course of many years. In fact, during the last few years of her life, this wonderful woman was hardly present. It gives pause to consider that one could be holding her hand and feel like she was a thousand miles away, while on Thursday night, people who were standing 10 meters away from me were giving me a very palpable embrace. All of them knew my mother for decades, remembered her sharp wit and her passion for family, and they were thinking of her while I was reciting the Kaddish.

As it happens, my mother was not a religious woman; quite the contrary. She was very committed to Jewish community, to Israel, and to family and holidays, but she could do without synagogue worship, and only went when propriety demanded it. She was, however, quite consistent about the yearly observance of yahrtzeit, the anniversary of her parents’ passing. She would make sure to light a memorial candle and go to synagogue to honor their memory by standing for the Mourner’s Kaddish. I am sorry that I never thought to ask her about this slightly odd contradiction, but I think I understand it now: The mourning rituals, especially the yearly anniversary, allow us to bring the deceased back into our lives, to retrieve a little bit of the closeness, in a way that obviously transcends the objective finality of their loss. Our need for nearness, our instinct for community, is one of our most purely human traits.

It is precisely that need that is being thwarted these days. Hopefully, in the not-too-distant future, we will be able to embrace those we love, as well as friends, neighbors, and the occasional mail carrier. On that day, I imagine there will be a great deal of hugging to make up for lost time. 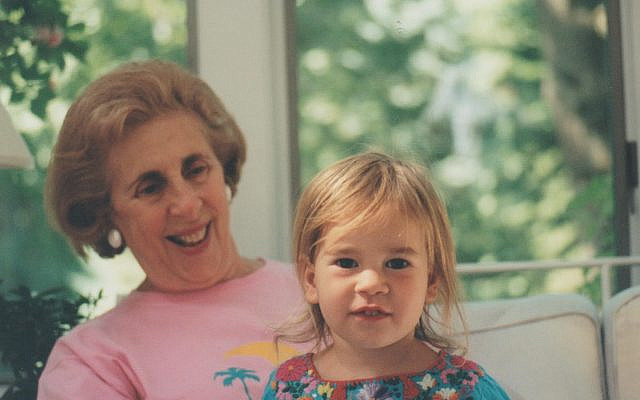 Lois Slott z”l, a very happy Grandma.
About the Author
Bill Slott is a licensed Israeli tour guide who has hiked and biked the length and breadth of the country. Bill is a member of Kibbutz Ketura, where he has lived since 1981 with his wife and three daughters.
Comments