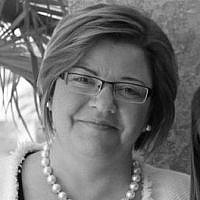 The Blogs
Julie Fisher
Apply for a Blog
Advertisement
Please note that the posts on The Blogs are contributed by third parties. The opinions, facts and any media content in them are presented solely by the authors, and neither The Times of Israel nor its partners assume any responsibility for them. Please contact us in case of abuse. In case of abuse,
Report this post. 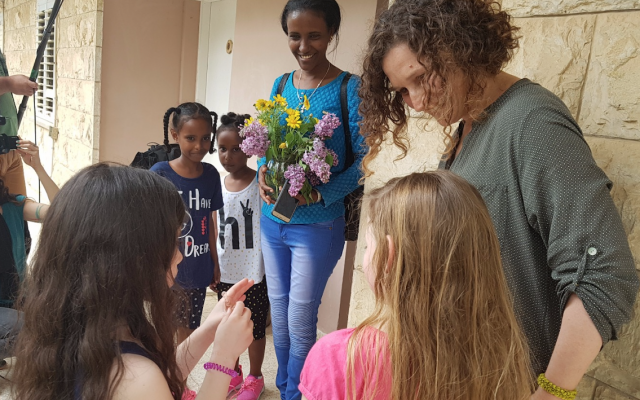 Kibbutz members welcome an asylum-seeking family to their community.

There I was, standing in the parking lot of the grocery store in Pittsfield, Massachusetts in the Berkshires with tears running down my face. My confused husband finished loading our groceries into the car and ran over to me with concern, wondering what bad news I had just received on my phone.

Actually, I had received amazing news. I had just finished reading Dina Kraft’s touching article in the Christian Science Monitor about Rawhe, an asylum seeker who fled violence in Eritrea and was living in poverty with her two young daughters in South Tel Aviv. Rawhe had recently been moved to the beautiful kibbutz community of Ma’agan Michael, where all of her basic needs would be met. What triggered my tears was Dina’s beautiful description of Rawhe and her daughter meeting their new adoptive “savta” (grandmother). Rawhe’s daughter says, “‘Mommy, we have a grandma and grandpa now. We go to the pool here, we go to the sea. You can laugh here.”

I had been following Rawhe’s journey from across the ocean where I was visiting my family during the summer. Rawhe was living in abject poverty after her husband left her with rent money for only one month and two small children to support. When she came to our attention, she was about to become homeless and had been identified by a volunteer on behalf of the kibbutz movement, Dr. Avi Ofer, as a potential match for the kibbutz resettlement program. We had been waiting with bated breath to see if the match would work and Rawhe and her two children would have a chance to find refuge.

From Kibbutz Sasa in the north to Kibbutz Samar in the south, kibbutzim are opening up their hands and their hearts, offering a safe haven for Israel’s most vulnerable asylum seekers.

Several months ago, the General Secretary of the Kibbutz Movement, Nir Meir, along with Avi Ofer, sent a request to all of Israel’s kibbutz communities asking them to absorb African asylum seekers who were struggling in South Tel Aviv with difficult living situations and uncertain futures:

“We call on kibbutzim to make every effort to host …asylum seekers, … and provide shelter and work, as much as possible. Asylum seekers have work permits and can legally work. This is a decisive moment for us all and it can be our moment of pride. Please respond generously and according to our values as kibbutz members, Jews, and human beings.”

In the past few months, many kibbutzim, large and small, wealthy and with few extra resources, have answered the call and welcomed in asylum-seeking families.

One member of a kibbutz in central Israel, Anat Bar-Natan Kigel, spoke on a recent video about her support of the project: “My grandparents were refugees in the Second World War. They crossed Russia from Lithuania…and they survived thanks to a lot of good people along the way and a lot of luck, and it seems only natural to me that we should be the good people on the way for other refugees…and enable them to have a good life and a safe place to live.”

Another kibbutz member, Varda Livney, explains her personal connection to the issue of helping those in peril: “As Jews, I think we’ve all been refugees or our ancestors have been refugees….We really feel it in our hearts. I personally feel it because my dad was a sailor on the Exodus. He brought Jews over from Europe after the Holocaust….I’m really glad that our community has decided to help with this issue.”

There are currently 33,000 African asylum seekers living in Israel after fleeing violence and genocide in Eritrea and Sudan, down from a height of over 60,000. (No new arrivals have reached Israel from these countries for several years, following the construction of a fence along the Israeli-Egyptian border.) Around 10,000 live in South Tel Aviv.

Life has always been difficult for refugees and asylum seekers here, and now it is almost impossible for them to meet their basic needs. Due to the Deposit Law, which requires employers to withhold 20% of the wages of asylum seekers (in addition to 16% for taxes), many of them live in fear of becoming homeless as they struggle to feed themselves and their children. Tragically, some have turned to prostitution in order to pay for rent and food.

Kibbutz resettlement provides a safe haven for these vulnerable families by providing them with clean and safe housing, jobs, childcare, and access to social workers and mental health professionals. Resettlement also helps ease the burden on the Israeli residents of South Tel Aviv.

In my work with the Consortium for Israel and the Asylum Seekers, I have the opportunity to meet people who are helping the asylum-seeking community, whether it be by delivering food to those with nothing to eat or helping secure medical and psychological care for those who endured rape and torture in the Sinai. We work to connect volunteers, donors, concerned community members, and heads of organizations in order to share information and resources.

Despite high levels of anti-refugee sentiment in Israel, as in other places in the world, many Israelis have come forward to help “the strangers among us”.

This is an opportunity to help Israel, to help African asylum seekers, and to support the good work of Israelis on the ground who are leading the way.

During Sukkot, the holiday we celebrate by spending time in temporary shelters, my thoughts are with those among us who need temporary shelter while their home countries are not safe for them due to genocide, torture, and other forms of violence and religious persecution.

Each day I check my phone to see if the next family has been moved. And yes, I still cry with happiness every time I read of another family leaving a life of pain and poverty and entering the warm embrace of a kibbutz community.

If you would like to learn more about how the kibbutz resettlement project is changing lives for the better, please contact me: julie@israelandasylumseekers.org 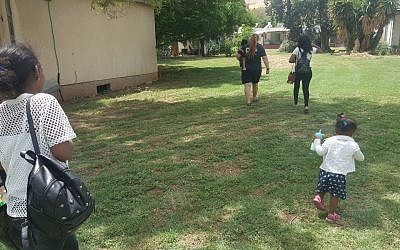 About the Author
Julie Fisher is an educator and advocate. She works to strengthen the ties between the United States and Israel, with a focus on education, culture, and philanthropy. Julie coordinates volunteers, donors, and humanitarian support for the African asylum-seeking community in Israel. She is the founder of the Consortium for Israel and the Asylum Seekers.
Related Topics
Related Posts
Comments