It has only taken 66 years, but finally, like many other great monarchies in Europe, we too have a king. Our beloved ruler, King Benjamin the First was elected on March 17th 2015, 26 Adar, 5775 in the Jewish calendar, and was crowned by his adoring subjects,

Although formally King Benjamin does not come from a royal family, his parents were certainly members of the Zionist aristocracy. Young prince Benji and his two brothers were sent to the best schools (over seas) and got superb education.

This outstanding upbringing came in handy: less than a year after the royal election our king realized that there was no one who could do the job as well as him. Thus he came to the rescue and bravely took upon himself the immense responsibility of running the whole country singlehandedly.

Our monarch is the head of state, but since no one here knew enough about the  outside world, he kindly agreed to take charge of Israel’s foreign policy. And as he wished that our hearts would remain pure and truthful, the king made sure that  everything we read, heard or saw was accurate. To that end he had no choice but to become the communication minister. Because he cares so much about our financial wellbeing, and he could not find, in the entire nation,  an expert who understood the economy well enough, our gracious King was willing to shoulder that burden as well. Finally, in his capacity as a minister in charge of collaborations with our Middle Eastern neighbors, King Benjamin is solely responsible for  bringing about peace.

You may be surprised, but only yesterday our king appeared before the Supreme Court and fought for our future, as he revealed to the judges the real truth about the natural resources in our country.

This is not the first time that our brave David battles Goliath. Not long ago, he flew to the US and bravely confronted the whole American Congress.

We are very lucky to have such a great king, the whole world admires him. In such a short time, he made Israel the best place on earth. We are thriving, have good jobs, our children attend exceptional schools, elderly people are being cared for, and our Palestinian neighbors enjoy quiet and peaceful life thanks to the equal rights that our beloved king had granted them.

If you’d like to know more about the good life in Israel, you are welcome to check the new book of Chronicles which was published lately by our king. You can find there more information about the aristocratic background of the king and his good wife, the queen. For the readers who like to read about royalty, the book provides useful and significant information about our crown prince and his younger brother.

If, at this point in time,  you don’t find enough substantial information in the book, don’t worry, it will be added soon in the second book of  Chronicles. The incoming chapters will include primary sources and documents pertaining to the immeasurable contribution of the king’s father to building Israel, and the theological background which was provided  by the queen’s father.

Next time you pass by Ben Gurion avenue, you may want to take a photo as a souvenir, as soon it  will be replaced by a new sign–Benzion Netanyahu (father of the king) Boulevard. 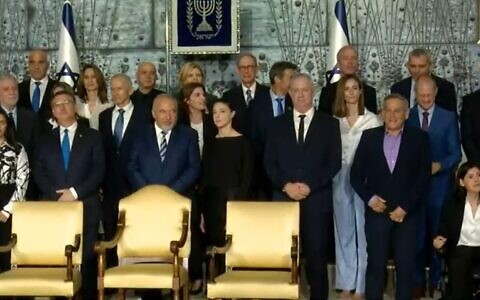