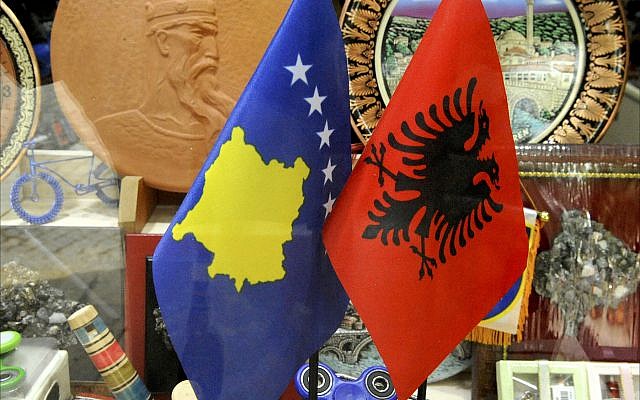 Kosovar and Albanian flags on display in a storefront window in Prizen, Kosovo. (Larry Luxner)

PRISHTINA, Kosovo — Teuta Sahatqija lives every day with bitter memories of the war that ripped her country apart 20 years ago.

On April 5, 1999, Sahatqija fled her home in the village of Gjakova with her husband and their four children — ranging in age from 4 to 10 — as neighbors’ houses were burning and corpses littered the streets.

“I found myself in the middle of the road with all the kids, not knowing where to go,” she said. “Without food or security, we were forced to flee through the mountains, and ended up in Albania — first in Kruma, a town near the border, then to Tirana.  Up until today, so many families don’t know where their loved ones are.”

Some 13,500 people are believed to have been killed during the two-year conflict between Serbia and its former restive province, while 1.2 million to 1.45 million Kosovars were displaced. According to Kosovo government statistics, 1,641 people are still missing. 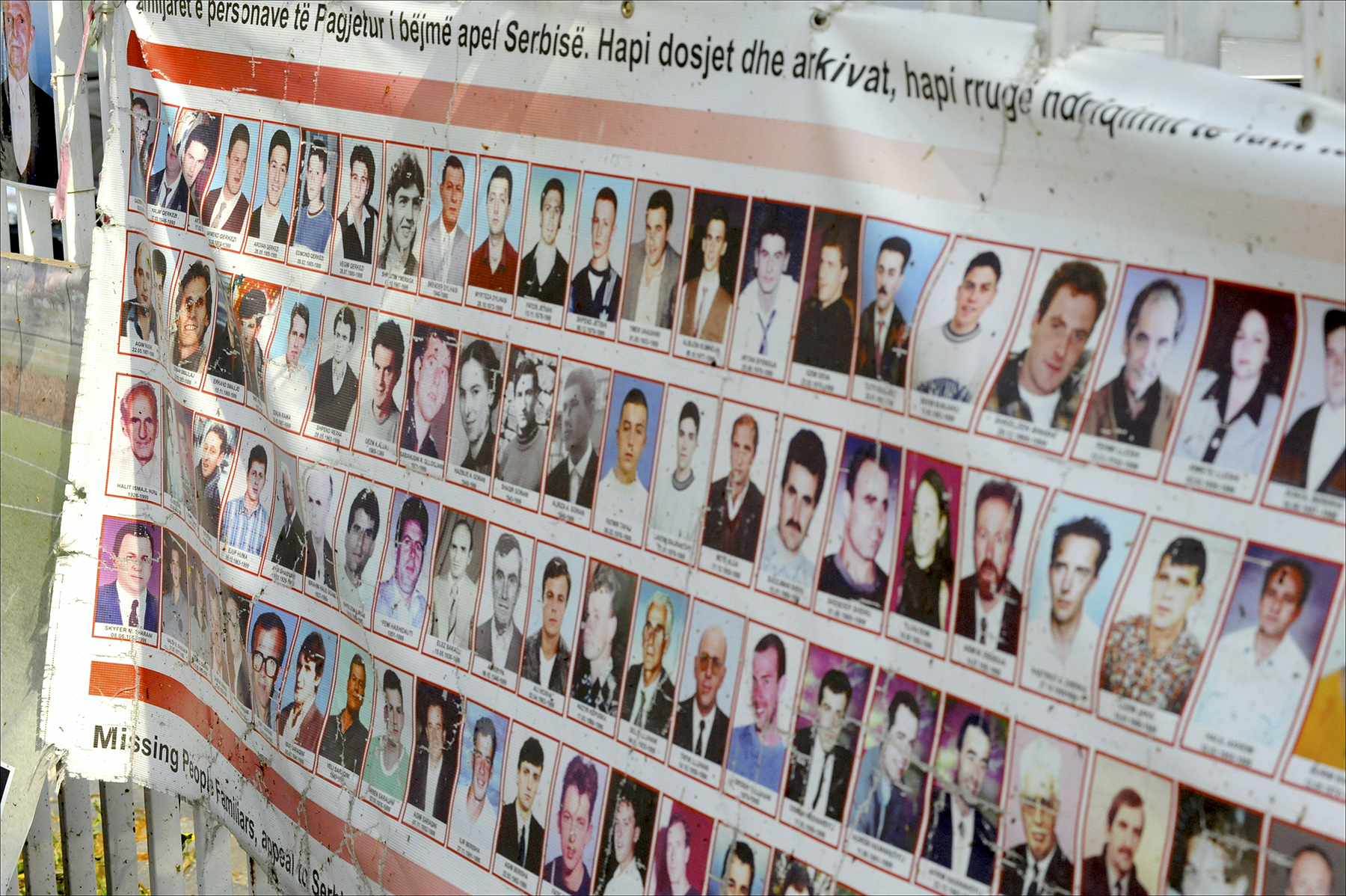 A banner next to Parliament in Prishtina calls on Serb authorities to open the sealed archives on the fate of Kosovars who disappeared during the ethnic cleansing campaign of the late ’90s. (Larry Luxner)

“Serbia knows where their bodies are, but they are not releasing that information,” she claimed. “Unfortunately, it’s a matter of politics.”

These days, politics pretty much defines the life of Sahatqija, 56, who back home carries the rank of ambassador, but whose official title is consul general of Kosovo in New York.

“Kosovo is a special case,” she explained in a recent interview in Prishtina, her nation’s capital (the Serbs spell it Priština). “Regardless of my title, every nation knows what our true mission is.” 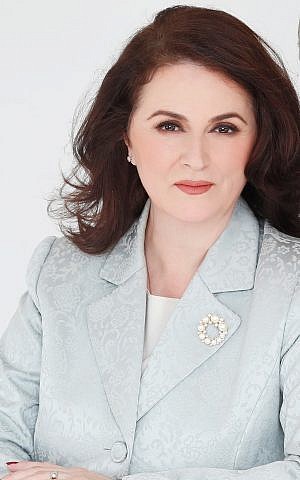 Sahatqija’s objective: to get as many nations as possible, including Israel, to establish diplomatic relations with Kosovo, and have her small, struggling country join the UN. Eventually, she’d like it to gain entry to NATO and the European Union as well.

“The second Kosovo is admitted to the UN, our mission will change only its name, but our work will continue as before,” she vowed.

In the 11 years since Feb. 17, 2008, when Kosovo unilaterally declared independence from Serbia, 116 nations have recognized Kosovo, including 23 of the European Union’s 28 members.

Yet the last country to do so was Barbados, nearly a year ago. And five EU member states — Cyprus, Greece, Romania, Spain and Slovakia — still refuse to establish ties with Kosovo for reasons of their own. Russia, China, India, Iran, Israel and — of course, Serbia — have all given Kosovo the cold shoulder.

So has Indonesia, the world’s most populous Muslim country, even though 95 percent of Kosovo’s 1.8 million inhabitants profess Islam.

On the path to recognition

“It’s been almost 20 years since the liberation of Kosovo, and 11 years since our declaration of independence,” Sahatqija said. “We need full, complete normalization of relations with all our neighbors, and for Kosovo to have full access to all international organizations.” 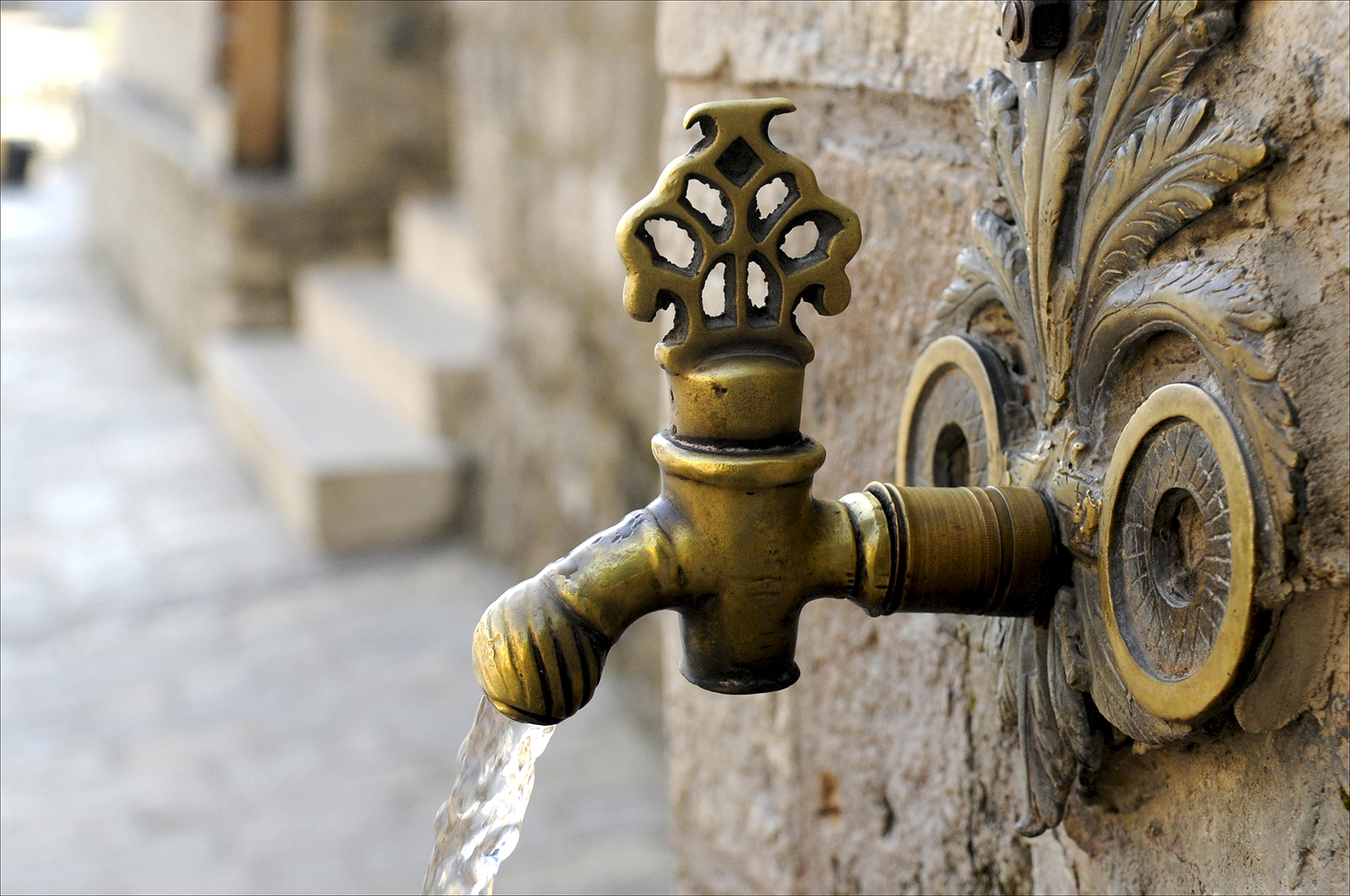 It’s hard to overstate the enthusiasm average Kosovars feel for Americans. Prishtina’s main landmark is an 11-foot-high bronze statue of President Clinton — a show of gratitude for the man who launched a NATO bombing campaign in 1999 to force Yugoslav troops out of Serbia’s restive province. That paved the way for Kosovo’s independence nine years later.

And in November 2017, Kosovo’s post office issued a 2-euro stamp featuring Rep. Eliot Engel — the first time in living memory a U.S. congressman has been so honored. As a lawmaker, the Jewish Democrat from New York pushed hard for Clinton to intervene in the late 1990s against Serbian strongman Slobodan Milosevic, who had engaged in ethnic cleansing against the Kosovars.

While the two Balkan neighbors have taken tentative steps toward reconciliation, the ghosts of the past continue to prevent both sides from fully moving forward. Animosity from the Balkan wars remains palpable, and while both Kosovo and Serbia want to join the EU, Brussels says both sides must normalize relations before they can join the bloc.

So today, Kosovo is a sovereign republic with its own president, flag and stamps, but not its own currency. Its people use the euro, although Kosovo isn’t a member of the eurozone. 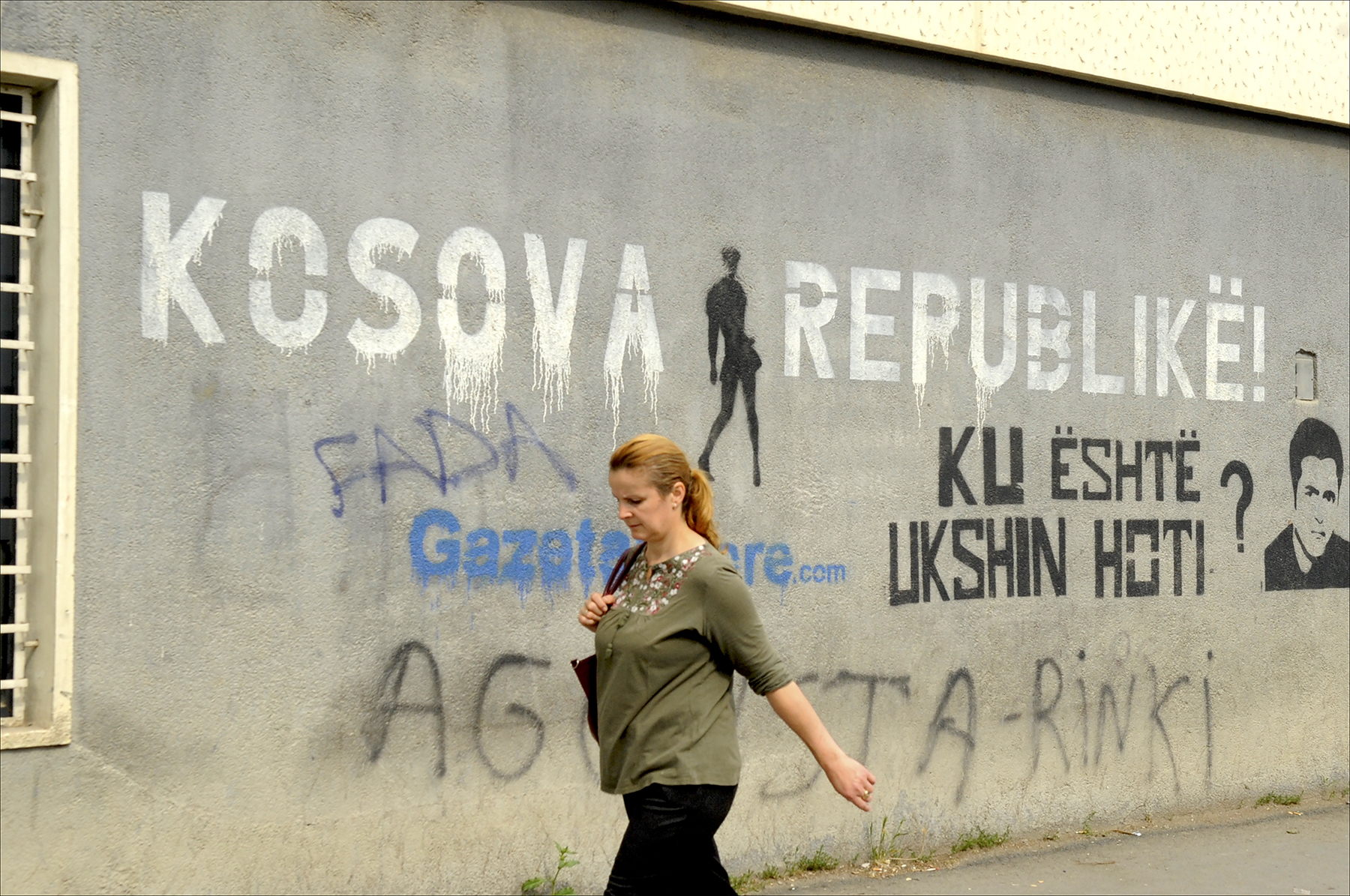 Woman walks across political graffiti scrawled on the side of a building in Prishtina. (Larry Luxner)

Kosovo may be on less-than-friendly terms with its neighbor, but it’s worked diligently to cultivate ties around the world, including the United States. In fact, more Kosovars live outside their country than in it, with 300,000 in the New York metropolitan area alone; large immigrant communities also flourish in Detroit, Switzerland and Germany.

After Trump’s narrow election victory and before he actually took office, there was some concern among Kosovars that his administration would take a less friendly approach toward their situation than the Democrats had. Those fears were only compounded by Trump’s adulation of Russian President Vladimir Putin and his constant ranting against NATO, which has been protecting Kosovo’s borders ever since independence.

Yet such concern is unfounded, said Sahatqija, because for the United States, Kosovo is a bipartisan issue.

“It doesn’t matter whether one or another party is in power,” she said. “Kosovo was liberated during the Clinton administration, but we declared independence during the Bush administration. So no matter who is president, Kosovo has the sympathy of both parties. Remember that the statue of Bill Clinton is on a boulevard named after George W. Bush.” 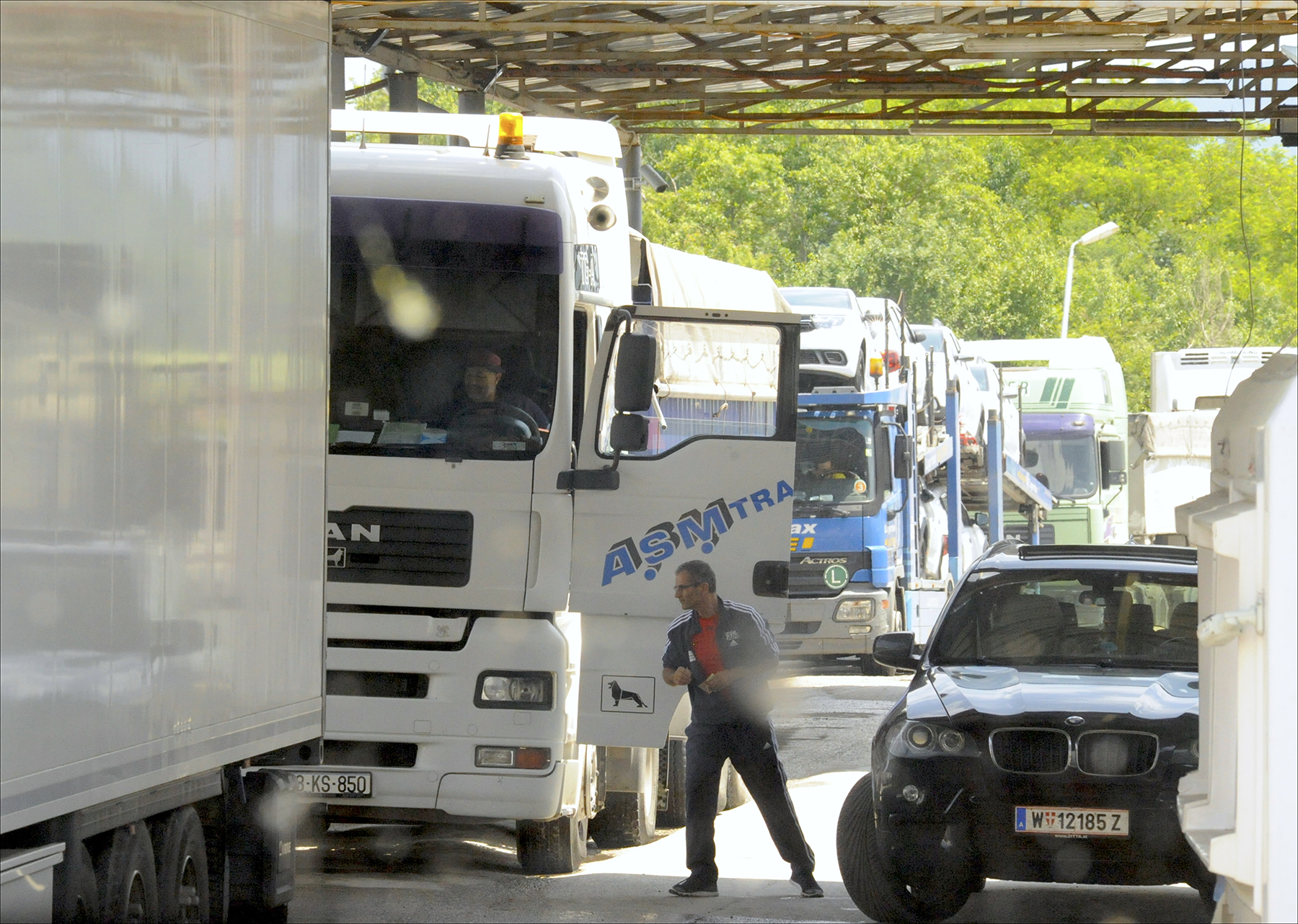 Trucks line up at Kosovo’s customs checkpoint waiting to cross into Serbia. The Serb authorities still do not recognize this as an international border. (Larry Luxner)

In December, Trump sent a letter to Kosovo’s President Hashim Thaçi, prodding him to make a deal with his Serbian counterpart, President Aleksandar Vučić, and end the standoff.

“Failure to capitalize on this unique opportunity would be a tragic setback, as another chance for a comprehensive peace is unlikely to occur again soon,” said the letter. “The United States has invested heavily in the success of Kosovo as an independent, sovereign state.”

The pressure from Washington comes amid new tensions between the two countries following approval by Kosovo’s parliament to create a 5,000-man standing army. Only a week before, Serbia’s leader warned that such a move could provoke a military intervention by Belgrade.

Sahatqija countered that her country’s military plans don’t represent a threat to anyone. 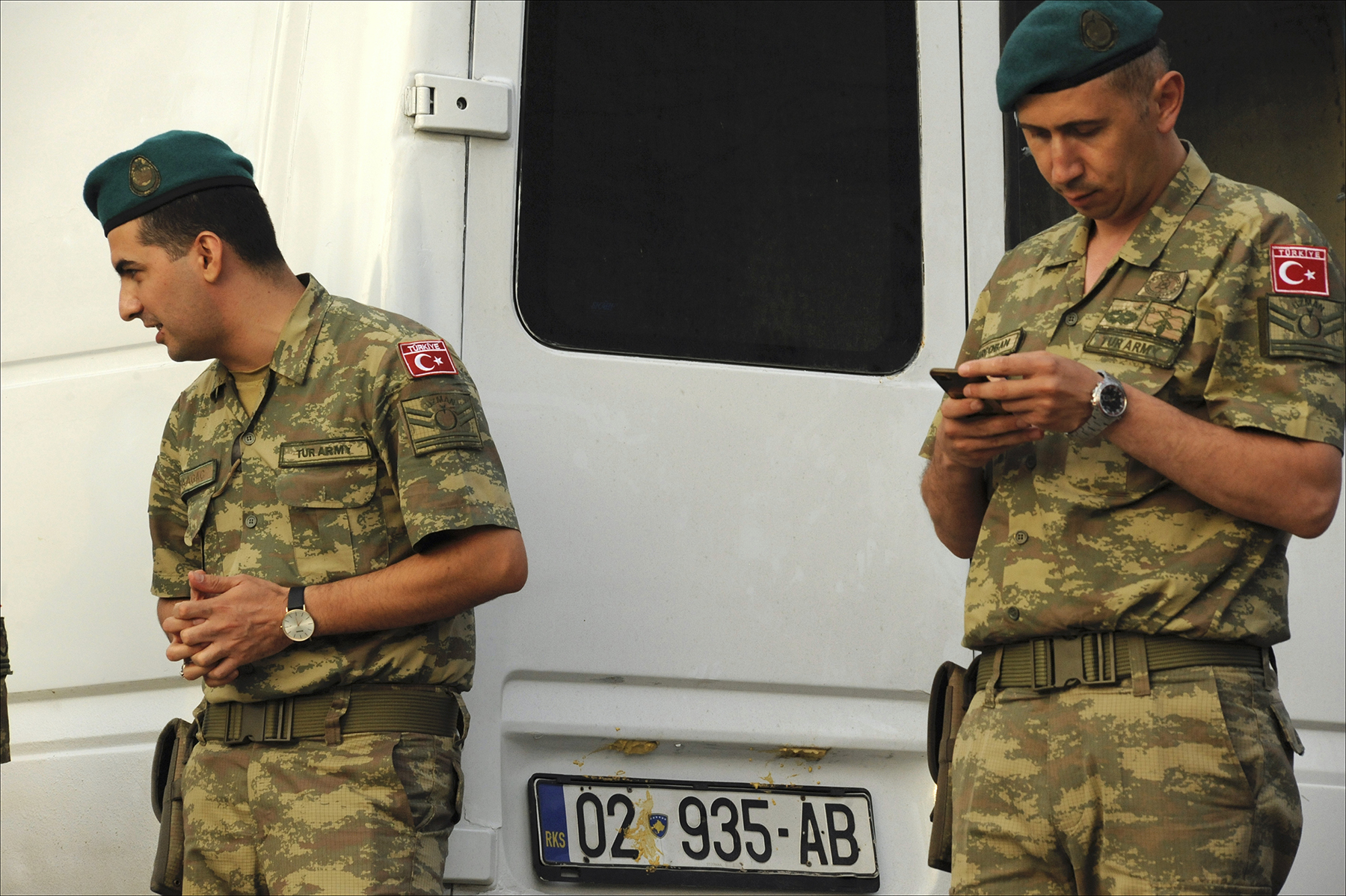 “Why should Serbia be concerned that Kosovo has an army?” she asked. “Each and every sovereign state has its own army. Under our constitution, we are not allowed to fight foreign wars, so our army is for protection, and that should be an added value to all neighboring countries, and to NATO.”

She also declined to comment on the ongoing “land swap” talks, in which Kosovo would acquire three Serbian municipalities in the strategically important Preševo Valley that areinhabited mainly by ethnic Albanians, and Serbia would receive a part of northern Kosovo populated by minority Serbs who don’t recognize the authority of the Prishtina government.

An estimated 150,000 ethnic Serbs live in Kosovo — mostly in five specific municipalities that border Serbia itself. In August 2016, violent protests broke out after local Serbian pilgrims attempted to visit an Orthodox church in the once-mixed village of Mushtisht. Albanian Muslims carrying Kosovo Liberation Army banners pelted the pilgrims with rocks and bottles, forcing them to turn back and leading politicians from both countries to condemn the violence.

Ethnic tensions continue to flare from time to time, and people on both sides of the dispute are uncertain what the future holds for them. 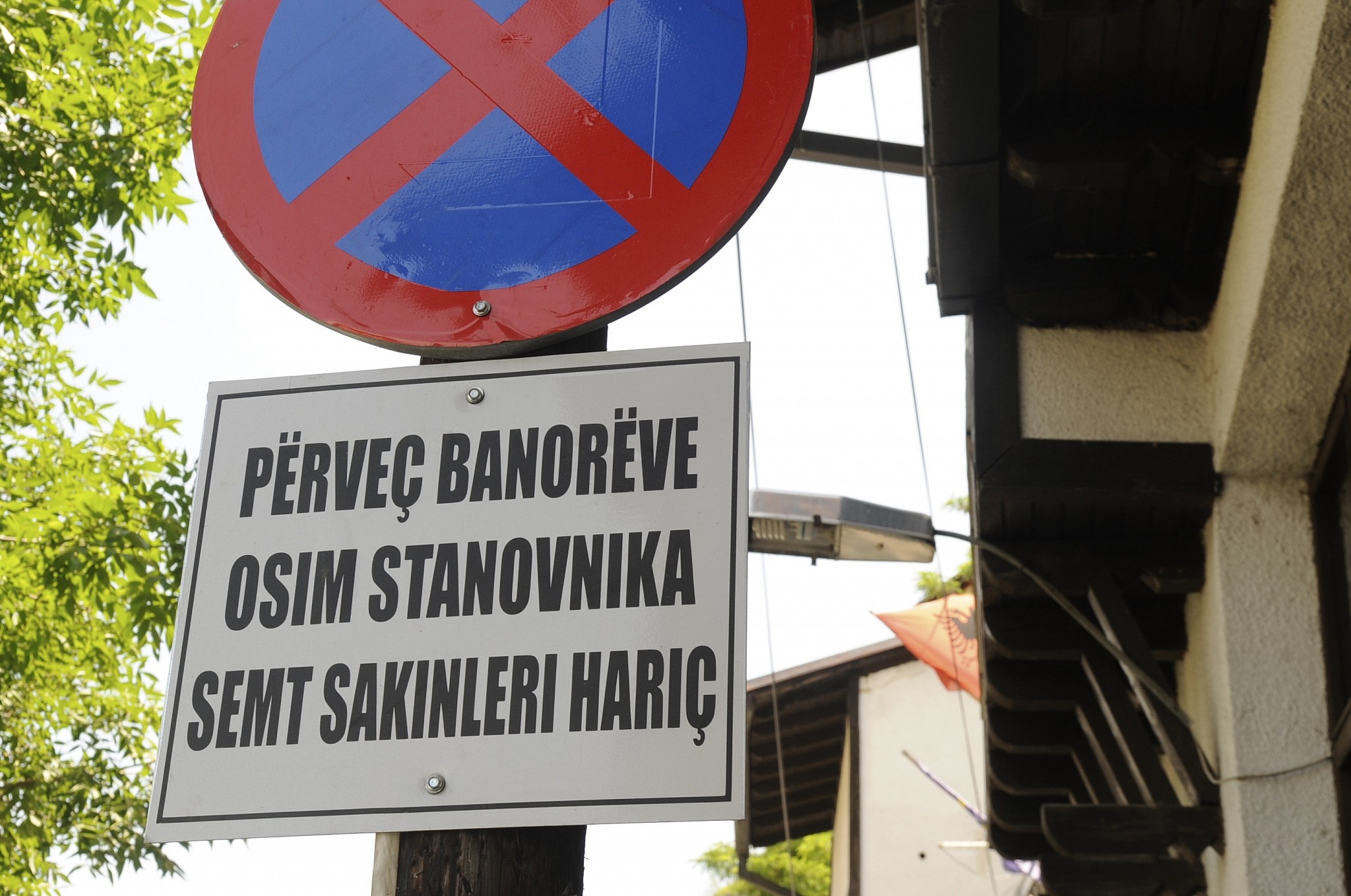 “I wouldn’t enter into conversation about what this dialogue can bring,” Sahatqija said, declining to speculate on whether Kosovo and Serbia will make a deal. “It is up to both countries and the EU, with U.S. help, to find an agreement that is suitable for both parties.”

Yet not all Kosovars favor such an exchange of territories. Some critics said it may open a Pandora’s box in the Balkans, reigniting old wounds in Bosnia & Herzegovina and Macedonia.

“It could turn into a nightmare,” he wrote in an October 2018 article for The Guardian. 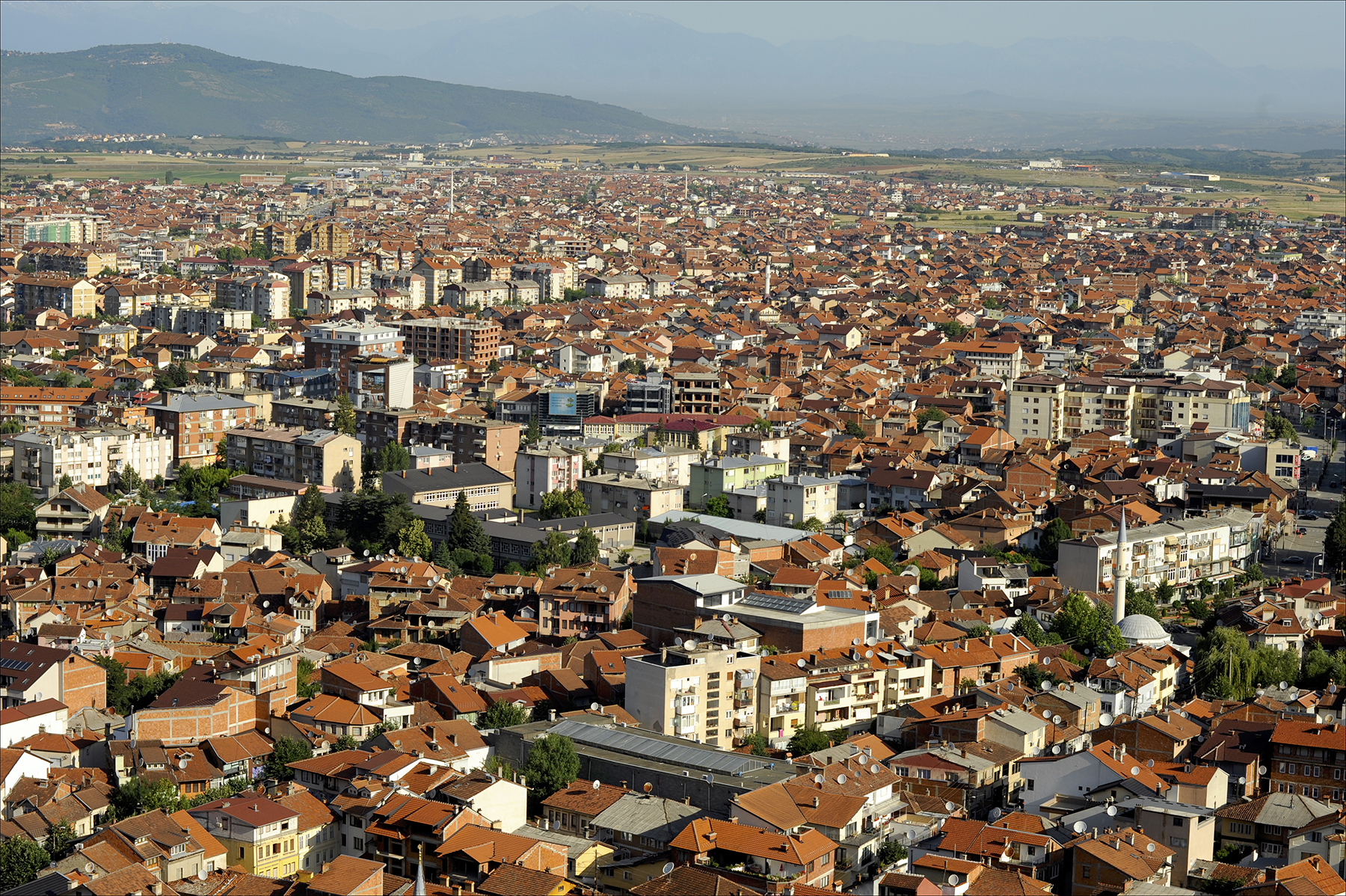 Panoramic view of Prizren, Kosovo, from the top of the Kalaja fortress — which in the 14th century served as capital of the Serbian Empire. (Larry Luxner)

“This land swap would result in fewer Serbs living in Kosovo and fewer Albanians in Serbia. Both countries would become more ‘ethnically pure.’ Many people would have to leave their family homes and birthplaces. In short, there would be an exchange of populations, not just territories.”

In an essay titled “Europe has died in Prishtina,” retired senior French military officer Jacques Hogard — who had been assigned to the French Special Operations Command in 1999 — argues that UN Resolution 1244 “strictly forbids” Kosovo from forming a real army. He also claimed that fewer than 6,000 people, not the “fatal and false figure” of 100,000, died in the fighting that preceded the NATO intervention.

“This new ‘state’ is born of an unjust war, provoked on the European continent against a European state … in order to ‘punish’ Serbia for wanting to maintain the very principle of its sovereignty and territorial integrity by fighting an armed rebellion developing in the province of Kosovo and Metohija,” wrote Hogard. “What would we say tomorrow in France if the department of Seine Saint-Denis — now mostly populated by foreigners from North Africa — intended to proclaim itself an ‘independent republic?’ This is basically the problem of Kosovo.” 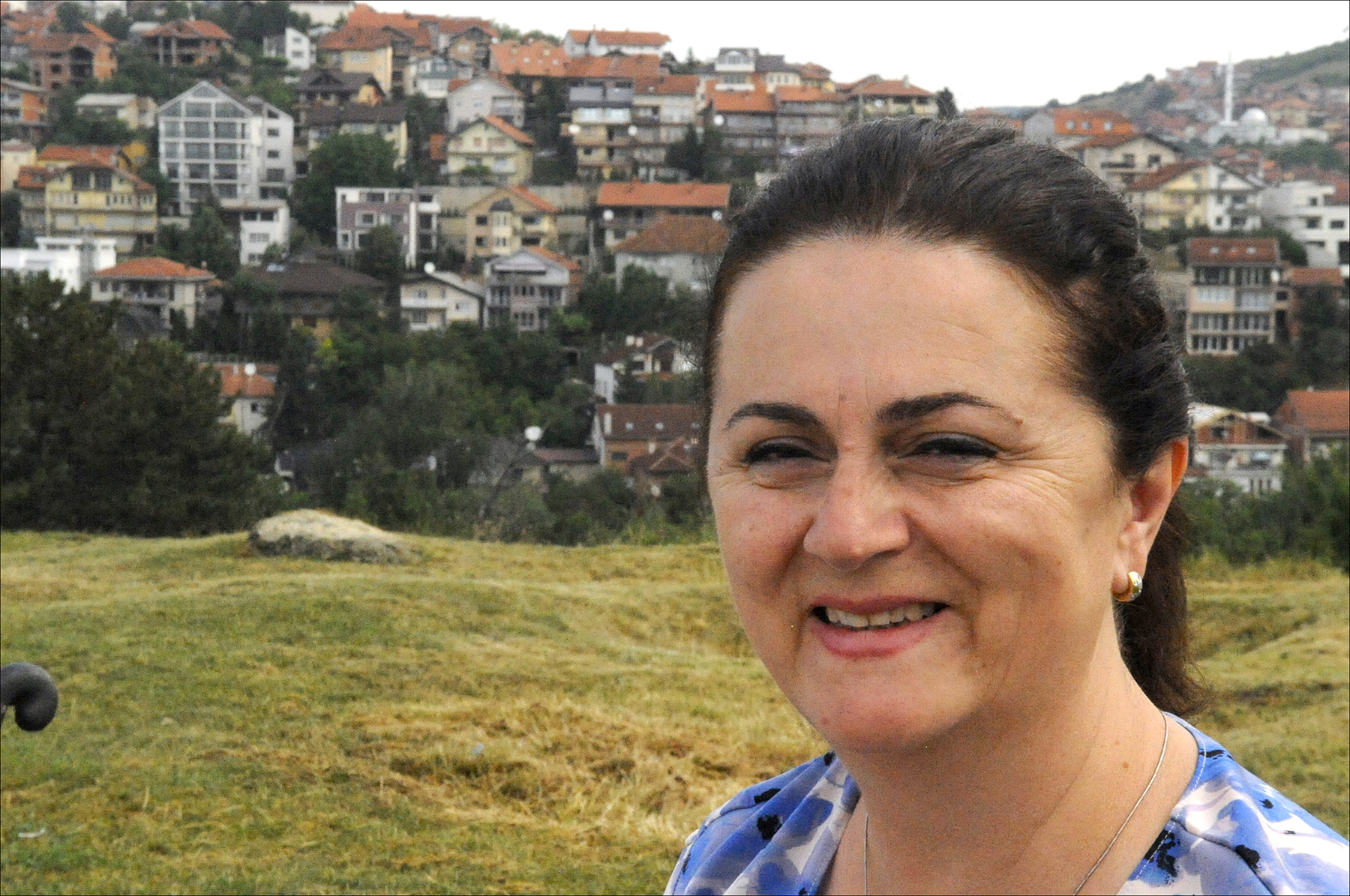 Despite the lack of direct communication between Sahatqija and her Serbian counterpart at the UN, she said, “I have a lot of friends in Serbia, and when I was a member of parliament, I initiated a dialogue with women parliamentarians from Serbia.”

Kosovo’s New York mission fronting Second Avenue, just a few blocks from UN headquarters, employs six diplomats, each of them responsible for a different part of the world.

One of them, Ines Demiri, has been particularly instrumental in generating support for Kosovo among Jewish Americans. Her father, Votem Demiri, is the patriarch of the country’s 56 Jews, nearly all of whom live in Prizren.

“Ines is doing a great job,” Sahatqija said. “Thanks to her, we’ve established strong ties with the Jewish community in New York.” 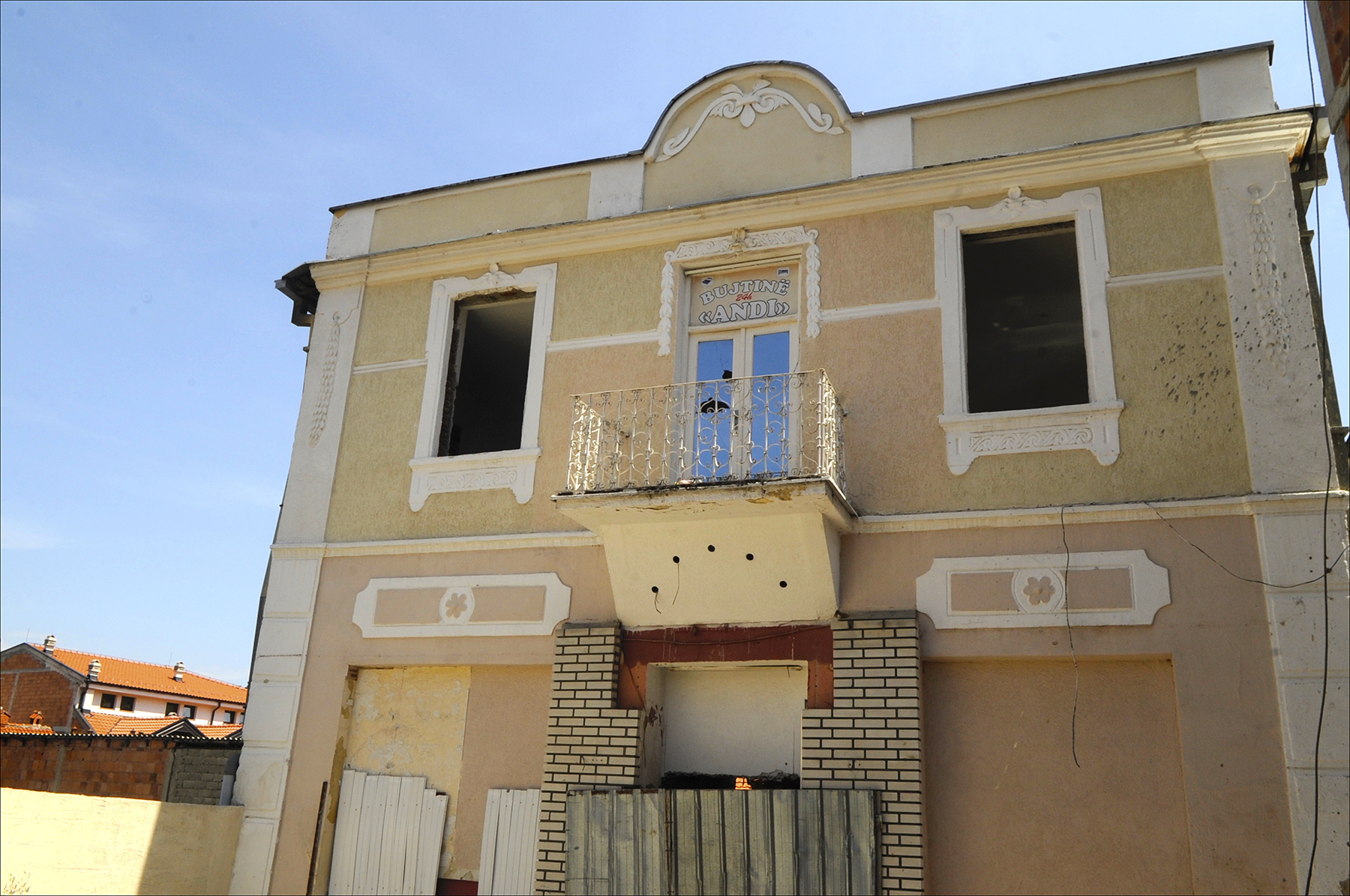 Major efforts are now underway to establish a synagogue and Jewish museum in Prizren — a $300,000 project for which Demiri is seeking support among Albanian-American Muslims as well as Jewish business executives; a fundraising event in New York is planned for next month.

“We’re now in the final phase of making this museum a reality,” she said. “For us, it’s very important that, through this museum, we will show friendship and respect for our Jewish citizens. They are also Kosovars, and we appreciate them.”

Even so, Kosovo’s warmth toward its Jews hasn’t translated into recognition by Israel.

“The Israelis never said so clearly, but their fear is that it might resemble the issue of Palestine,” Sahatqija complained. “But this has nothing to do with Palestine. Kosovo is a product of the dissolution of the Federal Republic of Yugoslavia. It’s the seventh state. Everybody already recognizes six states, so it’s unimaginable why they don’t recognize the seventh.”