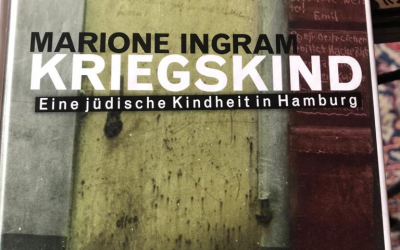 Once a year the Hamburg Jewish Association sends me a beautiful wall calendar with pictures of the city. As my late father, his parents, grandparents, and great-grandparents lived and worked there for many years, I am somehow also entitled to receive this annual token of my family’s association with the city. In addition, the Association attaches a report of its activities in the preceding year, together with a list of books which are connected in some way with the city. This book drew my attention, and after I had submitted my request it duly arrived by post and provided me with fascinating reading-matter during the Coronavirus lockdown. I must admit that my German vocabulary is sadly lacking, so that I found myself having to look up many words in the dictionary, but I feel that the effort was well worth it.

Marione Ingram was born in Hamburg in 1938 to a Jewish mother and a non-Jewish father, and so was defined as a ‘mischling’ (half-breed) by the Nazi authorities. Her autobiographical book begins with her account of having been sent by her mother when she was eight years old to take her younger sister to their aunt. She decided to return unbidden and found her mother in the throes of an attempt to commit suicide by putting her head in their gas oven.

That is as dramatic a start to any book as any you will find, and I read with bated breath how this child managed somehow to rescue and revive her mother. From that moment on there is a special bond between mother and daughter, and it is this that saves them from the subsequent massive bombing of Hamburg by the Allies and the firestorm that ensued. Marione describes the devastation caused by the American bombers and ‘Flying Fortresses’ by day and the British ‘Mosquitos’ by night in the framework of the concerted Allied attack known by the codename Gomorrha. She describes the frequent air-raid warnings and all-clear signals, and provides a telling account of the way their neighbours refused to allow her and her mother to enter the air-raid shelter, stating that it was reserved for ‘Aryans.’

In the total devastation that followed, Marion and her mother wandered through entire neighbourhoods of burning and destroyed buildings, trying to avoid the corpses that lay on all sides, eventually finding refuge by immersing themselves in a canal. It later transpired that all the people in the air-raid shelter that declined to accept them had perished in the bombardment. It so happened that the events of Gomorrha served to save Marione’s and her family (her father had been conscripted into the Luftwaffe) from being deported to a concentration camp, but they knew they had to go into hiding. This was arranged by their father, and they were given refuge in the flimsy farmyard hut belonging to an acquaintance.

Marione, her sister and her mother spent two years in hiding in the hut, subsisting on very little food, forced to help the farmer in various tasks and constantly hoping to avoid capture. When they were finally informed that Hitler was dead and the war was over, they were able to emerge from their hiding-place and return to what was left of the city. Marione began to attend a school in the Blankenese suburb of Hamburg which had been established on the estate of the Warburg banking family to provide shelter for Jewish children who had survived the camps.

At the school Marione met and befriended Uri, and she devotes one of the last chapters in her book to his harrowing story, describing how his parents and siblings were murdered in Auschwitz, and how he saved himself while still a teenager by accepting any kind of labour in the camp. He was eventually sent as a slave labourer to Alfred Krupps’s vast industrial complex in the town of Essen. The account of the awful conditions under which the slave-labourers, who had been brought from every country occupied by the Germans, lived and worked, and the sadistic and brutal treatment by the members of the S.S. who oversaw the work, is particularly vivid and distressing. Although the conditions and treatment were atrocious for everyone, especially bad conditions and treatment were reserved for the Jewish women prisoners there.

As the Allies advanced and the Germans realised that they would not be victorious, they moved large numbers of the prisoners to death camps, in order to erase evidence of their crimes. Uri managed to survive, but for a long time was too traumatized to speak about his experiences, until Marione managed to gain his confidence and hear his story, which she recounts in her book.

Many of the children at the school in Blankenese, including Uri, eventually went to live in what later became Israel, but Marione decided to go to America, and has made a life for herself there, taking an active part in anti-racist activities. Her efforts many years later, at a reunion of those who had attended the school, to find out what had become of Uri were fruitless, but she writes of the positive relations between the seventy or so people who attended the reunion, whom she now regards as her new family.

The book made a deep impression on me, and constitutes important documentation of a momentous period in modern history. I’m glad I made the effort to read it in German. I imagine that writing it cannot have been an easy task for the author, but I’m also glad to know that it has been published in English under the title ‘The Hands of War.’