The Blogs
Jay Tcath
Apply for a Blog
Please note that the posts on The Blogs are contributed by third parties. The opinions, facts and any media content in them are presented solely by the authors, and neither The Times of Israel nor its partners assume any responsibility for them. Please contact us in case of abuse. In case of abuse,
Report this post.

Oren’s retaliatory call to label E.U. products is good. Here’s how to make it better still.

Ambassador and Member of Knesset Michael Oren is a singularly creative advocate for the country he serves. And he’s a friend. And his latest campaign to respond in kind to today’s E.U. decision to label Israeli goods from beyond the 1949 cease fire lines is inspired. And it’s missing one key ingredient.

Oren is encouraging Israeli retailers to affix a “made in the E.U.” sticker because “consumers need to know that when they buy European products, they are supporting the E.U.’s anti-Semitic policies. We want to show the Europeans how we feel when they mark our products.”

Both those purposes — educating consumers and facilitating empathy in others — are noble. And Oren is also correct to clarify that he is not calling for a boycott of those products. After all the E.U. policy, problematic as it is, is also not a boycott. But the likely result of such labeling — by either the E.U. or Israel — will be diminished sales, hurting businesses and employees who deserve better.

Why equate Israeli businesses with their European competitors, especially when the E.U. just adopted its highly prejudicial labeling decision? Because — and here is the missing ingredient in Oren’s initiative — labeling European products in Israel should be for the purpose of encouraging not discouraging purchases. Those companies should be applauded and their packaging left unscarred by a scarlet letter intended to dissuade sales.

By selling to Israel these businesses are defying the hateful B.D.S. campaign running amok in Europe. In some cases they are running afoul of their own governments, employees and local customers. These are precisely the companies meriting our purchases. While buying home grown Israeli-made products is also important, let’s not forget the taxes, fees, and jobs that imports create…at Israel’s ports, airports, and marketing and trucking companies. And imports help grease the wheels for exports.

If these companies are making profits in Israel they are more likely to influence their governments to oppose labeling and BDS campaigns which can only hurt their bottom lines. If, instead, a labeling campaign designed to hurt their sales is successful, they are more likely to exit the Israeli market and be indifferent or even supportive of labeling and BDS.

We should be encouraging European companies to enter the Israeli market. Why complicate their decision with a labeling campaign intended to place their products at a competitive disadvantage? In that scenario, Israeli labeling could lead to the very result we all seek to avoid: fewer European companies doing business with the Jewish state.

I’ll be back in Israel next week. Despite its announced intentions, Oren’s labeling program will actually make my own pro-Israel consumerism easier by pointing out which European products to take off the shelf and bring to the register.

Michael, let’s meet and discuss my amendment to your initiative…at the British-owned InterContinental. The German beer, Spanish olives, Norwegian salmon and French cheese are on me. 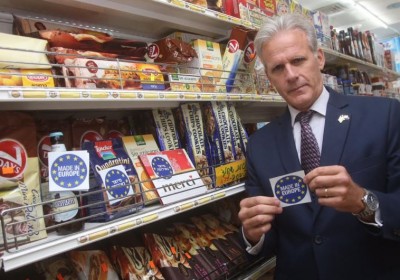