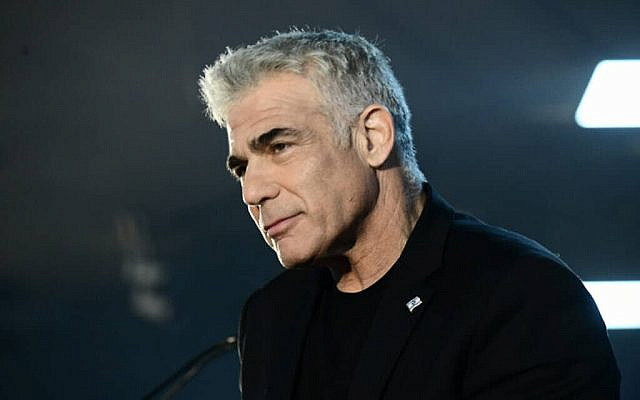 The prevailing narrative says the upcoming Israeli election is a contest between nationalists, with the alternative to incumbent Benjamin Netanyahu being some combination of Likud retiree Gideon Saar and Naftali Bennet, religious extremist and West Bank settlement enthusiast.

This is a distortion created by Israel’s media, whose right-wing bias is strangely enabled by its anachronistic left-wing reputation. There is no reason why the alternative cannot be a center-left candidate and that person is probably Yair Lapid.

What’s needed is clarity of thought and decisive action, including some obvious party mergers before the February 4 deadline.

Israel’s complex problems and its multilayered societal divisions breed extraordinary confusion. In such a state, even those who claim to distrust the media let it drive the discourse.

Despite social media and the widespread belief in the wisdom of the crowd, journalistic gatekeepers, especially in broadcast, wield decisive influence. And they usually use it to help the right.

That was evident the night of the 2015 election, for example. The Likud unexpectedly polled better than Labor (in its Zionist Camp incarnation), and TV channels immediately declared Netanyahu the winner; his “victory” speech soon followed.

Yet Netanyahu won nothing without Moshe Kachlon’s Kulanu party. The center-left ended up with 53 Knesset seats and the right-religious bloc 57, and Kachlon the balance of power. He had presented himself as a non-rightist (despite Likud provenance) and won leftists’ votes on the expectation he ally with Labor. Suddenly none of this seemed relevant; and Kachlon did emerge as a Trojan horse, meekly handing his 10 seats to Netanyahu.

Why did the media present things as it did? Does the party size suddenly matter more than the bloc when this favors Netanyahu?

It is true that most journalists do not themselves support the right – same as most educated and secular Israelis in other fields. But their employers have them bending over backward because of the sense that the public leans right.  Ratings wars must be won, and advertisers must be served (especially when the Internet has ravaged revenue everywhere).

The premise is true if one looks at the party vote of Israel’s Jewish population. But if the media were less superficial it would discover the public does not lean to the right on the issues. There is no majority for a permanent mixing with the Palestinians in a one-state situation, for settlement-building in the West Bank or for creeping theocracy and the mutually destructive accommodation of the Haredi state-within-a-state.

But that is too complex, and so the horse-race narrative holds sway.

The current incarnation of this is the insistence that only Saar has a chance of unseating Netanyahu. This causes all kinds of bumbling leftists to dutifully back him. (In part this results from the trauma of Benny Gantz’s mistake of joining Netanyahu after winning the last election and letting his Knesset majority slip through his fingers.)

The media will also tell you that Lapid is not viewed as a plausible prime minister. Part of this he earned by rights with silly flip-flops and efforts to dress up as a right-winger. But mostly it is an unfair diminishment of the Yesh Atid leader (perhaps because he was a media personality himself).

And so it must be said:

As superficial as this sounds, the way to prevent the media from continuing to ignore Lapid goes through the polls.  They may be undependable but they are consistent and they drive the discourse. Lapid must overtake Saar decisively in the polls.

This will happen, as every child and almost every pundit is saying this week, through mergers with other parties.

Lapid should take back Gantz (why not? There is schadenfreude in switching places) and seek to bring in Huldai’s nascent group.  Meretz should take in the moribund Labor Party and any other available dregs. And  Avigdor Lieberman should unite with Moshe Yaalon.  That would give the center-left public, and the persuadable bit of the right, more or less what it wants: A group of liberal centrists; a group of leftist semi-socialists; and some pragmatic tough guys sneering at the Palestinians but along for the ride.

There is every reason to believe this would boost Lapid well into the twenty-something zone of seats in the polls, not far from Likud.  Then the the bumblers who currently flirt with Saar (who is polling around 15 on average) as “the alternative” will move over.

If Saar unites with Bennet to grow himself, he may find this drives away yet centrist voters who do not view Bennet as someone who is guaranteed not to ally with Netanyahu. A Saar-Bennet party, whose only objection to Likud is the toxic presence of a criminal defendant clinging to his seat, clearly could form a post-Netanyahu hyper-nationalist government.  For a leftist to back this would be idiotic – if there is a “plausible” alternative.

An election in which the Netanyahu bloc does not get to 60 seats and in which Lapid’s is the largest party on the other side could very well make the ex-journalist prime minister.

Why not? In a world in which fellow ex- journalist Boris Johnson, former furniture salesman Netanyahu, and real estate shyster Donald Trump are heads of government, why on earth not?

Israel does not need a former general, and it does not need a “professional politician,” which in Israel has become shorthand for a scheming charlatan. Journalists have at least a viable minimum of intellectual curiosity, perspective and respect for the facts. An ex-journalist is plausible, and could well begin the healing from years of jackhammer agitprop that have driven people nuts.