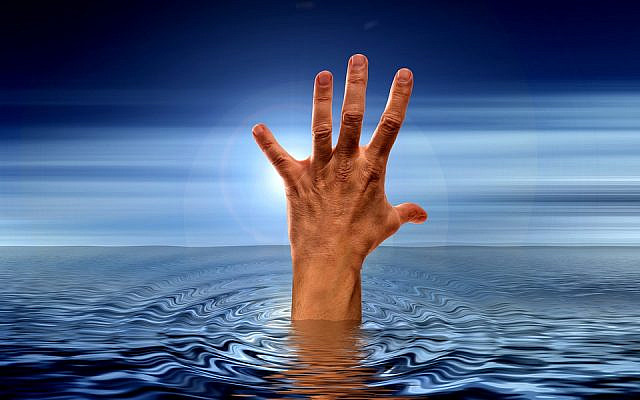 Rabbi Meir Leibush Weiser (1809-1879), better known as the Malbim, explains that betach/bitachon refers to an emotional state wherein one is confident about a successful future, and thus lives at peace with himself. The Malbim further explains that this term refers specifically to the inner serenity one has in the face of a tumultuous situation. He notes that betach/bitachon always has a positive connotation, as it is the opposite of a harried or confused state of insecurity. According to this, the word betach denotes a feeling of confidence in one’s heart, but says nothing about the actions taken as a result of this security. In Malbim’s estimation, the term machseh denotes one who actively lives with his bitachon in mind.

The Vilna Gaon (Biur HaGra to Prov. 14:26) offers another take on the difference between bitachon and machseh. Like the Malbim, the Vilna Gaon also understands that both terms refer to confidence about the future, but, unlike the Malbim, the Vilna Gaon differentiates between the “whats” that contribute to that confidence. When one trusts in G-d to bring about what He promised to do, this is called bitachon because it is a confidence that is bolstered by an assurance on G-d’s part. However, when one trusts in Him even if He did not specifically promise something, this is called machseh. The Vilna Gaon adds that G-d is so trustworthy and reliable that it is better to trust Him to bring about something that He did not explicitly guarantee than to trust a human patron about something that he explicitly promised to do. About this, the Psalmist says, “It is better to trust (lachasot) in G-d than to trust (betach) in (human) donors” (Ps. 118:9).

Interestingly, Rabbi Shlomo Pappenheim (1740-1814) explains that the root of machseh is CHET-SAMECH. Like the word chas in the phrase chas v’shalom, this root refers to “caring” about something to the point that one tries to preserve and save it from destruction. When G-d is viewed as a machseh, this means that one relies on the fact that G-d cares about him and will do what is necessary to prevent his demise.

If you enjoyed this essay, be sure to check out Rabbi Reuven Chaim Klein’s book on the history of the Hebrew language for more insights into the Holy Tongue!

Rabbi Shlomo Aharon Wertheimer (1866-1935) explains that the next three words tikvah (verb: kaveh, mikaveh), tochelet (verb: yachel, miyachel), and chikui (verb: chakeh, michakeh) all mean “waiting.” The variations in their exact connotations reflect the differing degrees of certainty about the arrival of that for which one is waiting. He explains that tochelet connotes “waiting” for something in the sense that one relies on it to come, but not whole-heartedly. He still has some doubts that he will actually attain what he expects. For example, Ps. 130:7 uses the phrase yachel Yisrael to denote the Jews’ trusting in G-d, because there is sometimes reason to doubt the certainty of our salvation, for we are ever-cognizant of the possibility that our sins might block what we are waiting for. The term tikvah (commonly translated as “hope”) implies that one totally relies on the fulfillment of his expectation, even if he cannot say with 100% certainty that it will actually happen. The term chikui refers to a situation whereby one totally believes that whatever he is anticipating will happen, and he is just “waiting” for it to become a reality.

Rabbi Pappenheim traces the word tikvah to the biliteral root KUF-VAV — kav — which means “a straight line.” The most basic meaning of that root is a “rope” or plumb line used by builders to make sure they are building in a straight fashion. From that meaning, the word tikvah was borrowed to refer to any sort of “rope” (see Josh. 2:18). When waters are said to gather up into one place, they travel in a “straight line” towards their shared destination (see Gen. 1:9), so the resultant body of water can be called a mikvah. (see Gen. 1:10, Ex. 7:19, and Lev. 11:36). When a person has hope in the certainty of something, he sees a “straight line” that connects the current situation to the inevitable situation that he anticipates — such hope is thus appropriately called tikvah.

The word somech literally means “nearby” or “next to” but its cognates also refer to “leaning” (which can only be done onto somebody/something that is nearby). In a halachic context, semichah refers to the commandment of “leaning” on an animal before offering it as a ritual sacrifice. Regarding that law, the Talmud (Chagigah 16b) says that one offering a sacrifice must lean on the animal with the entire force of his weight. The Malbim argues, based on this, that semichah differs from mishan in that the former is done with all one’s might while the latter is only partial.

The word mishan is another term that means “leaning” or “relying.” Rabbi Pappenheim explains that mishan is derived from the two-letter root SHIN-AYIN, which refers to “enjoyment” and “pleasure.” Other words that come from this root include sha’ashua (“playful” or “delightful”), yeshua (“salvation”), and shaavah (“crying out” with the goal of bringing about salvation). Mishan thus refers to the state of enjoyment and satisfaction that one achieves when one is “supported” by another. Rabbi Pappenheim explains that the word mishenet (“walking stick”) is also related to this root because when elderly people have trouble walking they receive much satisfaction from having something to lean on.

Rabbi Pappenheim differentiates between mishan and somech by explaining that the latter refers to any situation whereby one “leans” or “relies” on something else — even if he does so willingly and is not actually forced to do so. Case in point: When Moses leaned his hands on Joshua (Deut. 34:9), or when the Jews leaned their hands on the Levites (Num. 8:10), this does not mean that if they had not leaned they would have fallen. Rather, they leaned of their own volition. In contrast, the term mishan refers to somebody leaning on another for actual support because he is too weak or feeble to support himself.

This brings us to our next word: saad. The Malbim explains that saad primarily refers to “supporting” an inanimate object by making sure that it does not fall down. He explains that this word can be borrowed to refer to any situation whereby one’s patron supports his beneficiary without the latter’s knowledge. In such a case, it is as if said beneficiary is like an inanimate object that his benefactor makes sure does not fall. On the other hand, mishan refers to a beneficiary who willfully and knowingly relies on another, usually G-d (see Mic. 3:11), for his needs.

Rabbi Pappenheim explains that saad refers to offering support to one who requires mishan. In other words, mishan refers to a weakened or feeble entity that requires help, while saad refers to the act of helping the weak or feeble. When a tired or weak person eats food to replenish energy, this act is called soed (Gen. 18:5, Ps. 104:15), and the meal he eats is called a seudah. Those two words are cognates of saad.

Interestingly, Rabbi Moshe Tzuriel suggests that the word saad is better translated as “helps,” because the beneficiary himself also contributes to his own betterment, while the benefactor simply “helps” him along. In this way, the beneficiary does not totally rely on outside help, but rather takes matters into his own hands to some degree.

The Peirush HaRokeach relates the word sever (“hope”) to the orthographically-identical word shever (“food”). He accounts for this connection by explaining that people look towards G-d trustingly and hopefully, while He provides them with their food (see Ps. 145:15). Rabbi Wertheimer similarly writes that sever denotes the strong trust in G-d that stems from the recognition of His role in creating and maintaining all of existence.

Finally, we arrive at the word kesel. The word kesel in the sense of “confidence” or “reliance” seems to be a cognate of the word kesil (“fool” or “stupid person”), as both are derived from the triliteral root KAF-SAMECH-LAMMED. The Malbim explains that in tikvah, one awaits something good to happen, while in kesel, one is sure, with almost foolish naivety that nothing bad will happen.

Rabbi Moshe Wolfson accounts for the kesel-kesil connection differently. He explains that when it comes to relying on G-d and putting all of one’s trust in Him, one must do so even to the extent that he appears to be acting illogically or foolishly. Interestingly, Rabbi Wolfson explains that even though, in general, the fool walks “in the dark” (Ecc. 2:14) — unaware of what is going on around him — when a person is considered a fool for following G-d, then he is a fool who walks in the light. Because of this, Rabbi Wolfson writes that it is especially befitting to work on attaining the level of kesel during the month of Kislev, when the light of Chanukah serves to illuminate the otherwise dark winter.