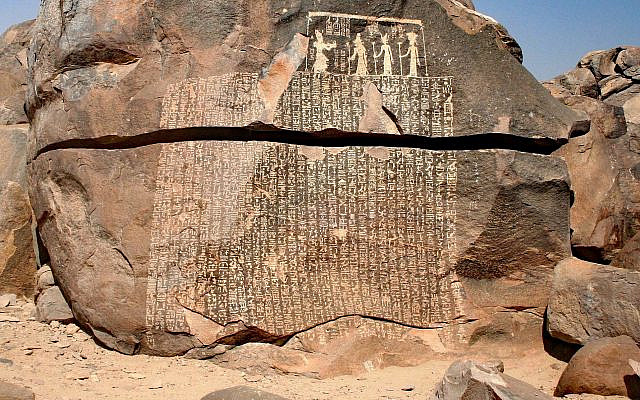 We’ve reached the end of Chanukah, passing through the darkest night of the year on Shabbat, which was the sixth night of Chanukah, the new moon close to solstice. From here the nights are lit by more and more moonlight, even if they are still getting longer.

As always, Chanukah is not just the turning point in the moon’s cycle, but also the turning point in Joseph’s story.* In the Torah the week before, Joseph was cast into a dark pit and sold as a slave. Then after rising in his master’s household, he is thrown down again, this time into a dungeon. As we read in Miketz on the Shabbat of Chanukah, after two years, Joseph gets lifted out of the dungeon, becoming Pharaoh’s right-hand man, second to Pharaoh “in throne only” (Gen. 41:40).

All this happens because Joseph listens to Pharaoh’s dreams, predicts seven years of abundance followed by seven years of famine, and (slyly?) advises Pharaoh to seek out a wise person to carry out a plan.

The outlines of the plan are common sense: store up a fifth of the grain each year during the years of abundance, and then redistribute that grain during the years of famine (Gen. 41:34-36). This coming week, however, in Vayigash, we learn the specifics of the plan. After there was no bread left in Egypt, the Egyptian peasants used up all their money to buy grain from what Joseph had stored up. When that was gone, they gave up their animals, and finally, after they had lost their money and their cattle, they gave up themselves and their land, becoming slaves to Pharaoh (Gen. 47:13-20).

The peasants had actually grown all that grain. Why couldn’t Joseph distribute the grain for free to them, so that he could have saved not only life, but also dignity and hope?

Joseph’s final step in implementing his policies was also the final blow against dignity. He removed Egypt’s peasant families from the lands their ancestors had farmed, transferring them from “one extreme of Egypt’s border to its (other) extreme” (Gen 47:21). He broke their connection to the land; now everyone worked on land that they had only ever known only as belonging to Pharaoh.

Rabbi Arthur Waskow pointed out in Godwrestling that Joseph did the reverse of what Shmita teaches. Joseph understood Pharaoh’s dreams as Egypt’s fate: “There will be seven years of abundance followed by seven years of famine.”

But, as Reb Arthur explains, Judaism understands dreams to be akin to prophecy, which always allows for human freedom, rather than fate, which does not. If we look at Pharaoh’s dreams as prophecy rather than fate, their message changes: “If you sow without taking a break, you will have seven years of abundance, then seven years of famine.” The implicit message would be, don’t sow and harvest seven years in a row. Instead, let the land lie fallow in the seventh year.

There’s a lot more to the message of Shmita, and what Joseph did instead was in every way Shmita’s antithesis. In the Shmita system, at the beginning of the first cycle of seven Shmita years, the land was distributed equally among all the Israelite families. Maybe some were better farmers than others; maybe some ended up in debt and had to sell their land. But no one could ever give up their land forever (lits’mitut – Lev. 25:23). After the seventh Shmita, in the fiftieth or Jubilee year, even if you had lost your land, your family got it back.

Not only that, there was no such thing as permanent debt or slavery. Instead, after the Shmita year, debts were canceled (Deut. 15:1-2). If debt nevertheless forced any Israelite to sell themselves into slavery or service, they had a right to go free after seven years, with full compensation (Deut. 15:12-15). Even if they decided that they didn’t want to go free at that time, they were required to go free after the seventh Shmita, in the Jubilee.

Shmita brings freedom, for the people and for the land. But Joseph’s plan brought vassalage for almost every Egyptian, and cultural genocide. It created the equivalent of a fascist state, where the next Pharaoh could cast the Israelites into crushing slavery, and enlist his people (that is, his other slaves) to kill the Israelites’ baby boys.

Even as Joseph enslaved the rest of Egypt, he preserved the freedom of two groups: the Israelites who were his family, and the priests who served Pharaoh. Both were given an allotment of grain, so they didn’t need to sell off any property in order to survive the famine. This again was the opposite of the ideals of Israelite society, where priests had no allotment of land and depended on the rest of the people for their survival.

Joseph thought he could, enslaving the rest of Egypt while he kept his family well-fed in Goshen. The next Pharaoh, the one who didn’t know Joseph, also thought he could. His punishment, or rather, his consequence, was that he lost his own freedom when God hardened his heart.

Therein lies a basic lesson of Shmita: You can’t deprive other people or the land of their freedom in order to preserve your own. It’s a lesson we all need to learn, in Israel and the United States and everywhere – and soon. Because we still have the freedom to avert the course of climate change by choosing to live differently – if we give freedom to the land and support freedom for all peoples. Soon enough, we will no longer have that choice.

To read Arthur Waskow’s full interpretation of the Joseph story, go to https://theshalomcenter.org/content/dark-joseph-his-brothers. This column was first published in briefer form as part of Hazon’s Shmita blog.