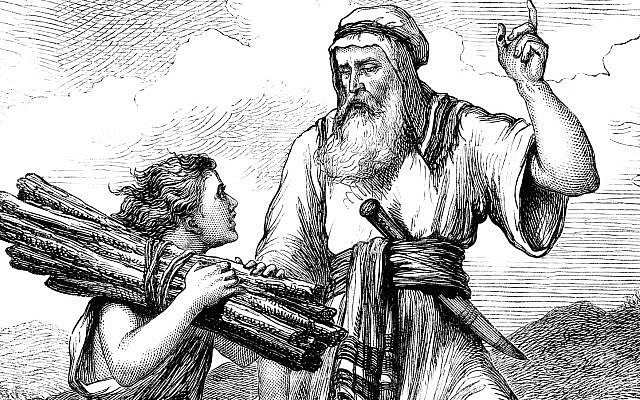 A scene from the Old Testament - Abraham and his son Isaac who is carrying the sticks for the 'burnt offering', or sacrifice, which Abraham had been asked by God to make of Isaac. Illustration from "The Children's Friend" Vol XIII, published by Seeley, Jackson & Halliday, S.W Partridge & Co. in 1873.

Why is the term “lech lecha” found in the beginning and end of Avraham’s life? What is the term’s meaning that makes it iconic for Avraham?

The use of “lech lecha” serves to bookend the essential components of Avraham’s life as he becomes the progenitor of the divine people. This is represented liturgically by the chiastic structure of the two posukim containing the terms “lech lecha”. In Breishit 12:1, G-d tells Avram, “lech lecha” followed by three references to his interests, ‘your land, your birthplace, the house of your father’. In 22:2 we have the reverse; first there are three references to his interests, ‘your son, your only, your beloved” followed by “lech lecha”.

These two events represent the beginning and end, respectively, of Avraham’s mission and ultimate success as the ideal candidate to father the divine nation. Everything between these bookends represents the trials that served to prove his fortitude and value. This is why this last trial is prefaced with the unique expression of “neesa”, a test or banner. It is not that this was the only test of his life, rather all those events between these bookends served as tests through which Avraham’s success demonstrated his worthiness. Through the culmination of his successful transit through the gamut of those tests, Avraham became a banner. Defining the ideal servant of G-d for his successors and generations to follow.

The Akeidah in particular is the paradigmatic example of such service. The particular use of “lech lecha” as the icon to represent this character’s evolution hints to the paradox experienced by the faithful and the motivation of a true believer. Aspiring towards one’s own best interest will inevitably be conflicted if influenced by the interests of an external entity. However, when that external drive is the Divine, then forfeiting one’s will is ultimately done ‘for you’; therefore any such ‘going’ compelled by the divine is ‘for you’.