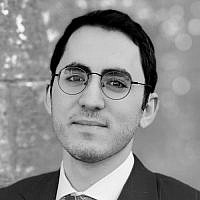 The Blogs
Marty Babayov
Apply for a Blog
Please note that the posts on The Blogs are contributed by third parties. The opinions, facts and any media content in them are presented solely by the authors, and neither The Times of Israel nor its partners assume any responsibility for them. Please contact us in case of abuse. In case of abuse,
Report this post.

There is nothing wrong with criticizing Israeli policy, examining the best way to approach a conflict, or even publishing your opinion and opposing a country’s actions. However, when the vast majority of your attention shifts to lambasting a tiny, mostly peaceful nation on an almost daily basis, or alternatively when people compare Israel to horrific active war situations like Yemen, there is something insincere going on. When the UN passes over ten times the resolutions against Israel than it has against Iran – a country which has been designated a state sponsor of terrorism – there is something dishonest going on. When foreign departments of state (intelligently and logically) warn civilians away from war-torn countries, but those bombed-out shells of nations are equated to Israel’s calm beaches, integrated cities, and fascinating historical sites, there is something underhanded going on.

When Israel is condemned for rejecting UNWRA’s proposal to ‘re-train’ teachers and staffers found to support terrorism and antisemitism rather than firing them but the world is silent in regard to Palestinian schools brainwashing 5-year-old school children through their demonization of Israel and the Jews, who are regularly referred to as “the Zionist enemy” in school textbooks, you have to wonder if this is fair criticism or possibly something more.

Palestinians and others are running like hell out of Syria, but nobody talks about how Jordan is in violation of its international obligation of nonrefoulement (the international customary law where refugees and asylum seekers must be taken in by the first peaceful country available); in fact, they outright refuse entry, the Jordanian PM himself saying, [t]hey should stay in Syria until the end of the crisis.

According to the Syrian Observatory for Human Rights, over half a million people have been killed in the Civil War. Approximately 10,000 people are running from violence on a daily basis, millions of Syrian children under five are without food, and their health system has collapsed completely. True, the public knows about this situation, but to what extent? The Australian Department of Home Affairs states that “the security situation in Syria is extremely dangerous due to military conflict, including airstrikes, and very high levels of violence, terrorism, and kidnapping. Chemical weapons could be used in conflicts.”

Checking major media outlet websites, you wouldn’t know this is going on. You can find hundreds of articles printed in the last year condemning the Jewish state and their ‘baby-killing soldiers’ because they defended their civilians from missiles launched from UNWRA-supported schools and hospitals,  but only a few passing references to the atrocities being perpetrated in Syria. To the uneducated bystander, drawing conclusions solely from what they are exposed to by the major media outlets, Israel is by far, the most aggressive country in the middle east.

Yemen is just a sad story. It’s one of the oldest centers of civilization in the Near East, but it is being violently and gut-wrenchingly fought over in an extension of the Saudi-Iran conflict. Three years ago, the UN warned that 13 million Yemeni civilians face starvation in what could become “the worst famine in the world in one hundred years.” Since then, nothing has changed. According to the U.S. State Department, “you should not travel to Yemen due to COVID-19, terrorism, civil unrest, health risks, kidnapping, armed conflict, and landmines.”

In Israel, for the most part, it’s quiet. People (Israeli Jews and Israeli Arabs) go to work; their children go to school. They live peacefully together. Every so often there’s a ‘skirmish’ between Gaza and Israel, but even so, in the Spring of 2021, with over 4,300 Hamas-fired rockets toward Israeli civilians and after eleven days of fighting, only 225 militants and twelve Israelis were killed. Don’t get me wrong; any innocent killed is wrong. However, even with that, the foreign media spends a disproportionate amount of airtime on Israel as compared to the above true, dreadful war zones where hundreds of thousands of people are killed and tens of thousands of children are starving to death on a daily basis.

To be obsessed with something means that an idea or thought continually preoccupies or intrudes on a person’s mind. To allow something (in this case, Israel) to relentlessly consume the public’s thoughts and the media’s time demonstrates that there is, clearly, some kind of obsession with Israel. Like most obsessions by a toxic person, this is not a positive one. It focuses on every small negative action and makes it seem monumental; it takes a singular, possibly deleterious event and represents it as if it were the norm.

This obsession smears the truth and warps reality. It makes Israel seem like a war zone and even goes so far as to paint her as an aggressor comparable to Syria, the Taliban, or even Iran.

It would be great if people were factually and morally honest when representing the events in Israel, but more often than not, they aren’t. Evenhanded criticism is fair. Disapproval of choices, sure. But a disproportionate amount of attention and haranguing? One must consider whether that fixation and motivation is sincere or stems from something else. Anti-semitism, perhaps?

About the Author
CEO and founder of The Suit Depot.
Related Topics
Related Posts
Comments