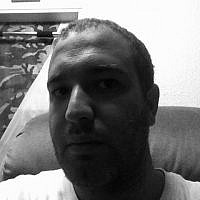 The Blogs
Shua Solomon
Apply for a Blog
Advertisement
Please note that the posts on The Blogs are contributed by third parties. The opinions, facts and any media content in them are presented solely by the authors, and neither The Times of Israel nor its partners assume any responsibility for them. Please contact us in case of abuse. In case of abuse,
Report this post.

Whilst I appreciate the plethora of opinions voiced about Israeli Government policies both inside and outside the state of Israel, Joshua Leifer’s opinion piece in the Times of Israel is so full of self-righteousness, ingenuity and misrepresentation of the facts that I am forced to respond.

Leifer sees himself as a prophet of social justice, standing up for the rights of the oppressed and invoking passages of Martin Luther King Jr on his way to disrupting Naftali Bennet’s speech whose policies he refers to as “colonialist, jingoistic and racist.”

Now let’s talk about the facts. Naftali Bennet does not support the creation of a Palestinian state in the West Bank and Gaza strip nor does he endorse the uprooting of Jewish settlements. His plan, that he clearly detailed before the recent elections involves annexing Area C of the West Bank and offering the Palestinian who live in that area full Israeli citizenship. The two million Palestinians Arabs living in Areas A and B of the West Bank will be given self- rule and have freedom of movement without roadblocks. Palestinians in Areas A and B will be able to vote as Jordanian citizens.

This may be unrealistic  in the current political climate but Leifer has failed to explain how this is a policy of Apartheid. On the contrary, Bennet’s plan insists that not one Arab will be uprooted from his home, that Arabs in Area C will receive full citizenship and that all Arabs will receive rights and an opportunity for a better life. As a Minister Bennet has often called for the integration of more Israeli-Arabs into the workforce. Yet Leifer without explanation has stated that Bennet has “total disregard for civic rights.” Not one proof is given by Leifer for his characterization of Bennet. He refers to the time he was head of the Yesha Council, but increasing Jewish settlement in places that are dear both historically and strategically for the Jewish people, in no way means that you are denying the civic rights of another, as Bennet himself has pointed out on numerous occasions.

However, I am afraid that this article of Leifer represents a more pervasive attitude amongst Diaspora Jews, namely that they are our moral guardians. That we as Israeli citizens do not really know what is best for us. That we are morally corrupt to the core and our Diaspora brethren must save us from our moral failings before it is too late. One only needs to read Jeremy Ben Ami and Peter Beinart’s latest books to understand how morally stained they think we are.

I firmly believe that every Jew is allowed to voice an opinion on the policies of our Government. If I have an opinion on Barack Obama surely they are entitled to their opinion about Binyamin Netanyahu or Naftali Bennet. However there is a world of difference between voicing an opinion and the self -righteousness portrayed in Leifer’s article which is both dangerous and arrogant. This characterizes the attitudes and opinion of many in the J-Street camp and is a worrying phenomenon.

Naftali Bennet is a voice amongst a variety of opinions under the Zionist Umbrella. His policies are neither immoral, nor do they disregard the civic rights of another people. Apart from being dishonest Leifer must also understand that we do not need nor appreciate our morals being dictated to us by others.

About the Author
Shua Solomon is a 24-year-old student who resides in gush Etzion; He is originally from Australia and moved to Israel after completing high school.
Comments