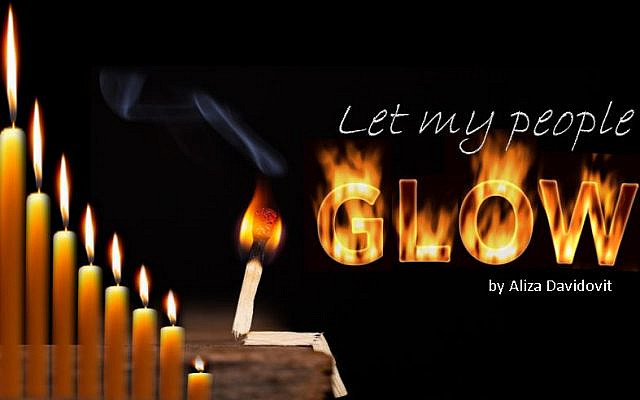 The flickering flames were dancing in the clear Lucite menorah cups. The flames were not in sync tonight, each striving for its own direction. I always wished I could read the flames like the kabbalists could and know what they are trying to say. But their lights remain ever a mystery, and they dance and dance until they are no more. And what remains is the wax coating of melted candles which take much effort to remove. Hot water and Windex, more hot water and Windex and several days of wiping before all traces of the holiday are gone altogether. What happens to that light which envelops our homes with warmth and inspiration and sets our hearts aglow with something otherworldly? I always feel lonely at the end of Chanukah; I miss the candles that keep me company. I look at them. They look at me. For a few days after it feels like something is missing from my life. Life feels darker. And then I realize that the torch has been passed to us; we ourselves are the lights that must live on once the festive candelabras are placed back up on the high shelf. We are the flames that must burn radiantly with our faith in G-d.

From one dark winter day to the next we mope along as the lights extinguish and take with them their warmth and certainty only to be replaced by chilly intimidating shadows. The only remaining place we can find to warm our spirits is over the roaring fire called faith, without which the darkness becomes a gravitational abyss from which we cannot extricate ourselves.

Interestingly, it is at this time of year when the nights are longest and darkness seems to prevail that we read about the story of Joseph, who found himself in the darkness of a snake-filled pit into which his brother’s had cast him and then later in the darkness of Pharaoh’s dungeon. What truly did he have to live for? One day he was living a comfortable life as the beloved favorite son of Jacob; the next day his brothers sold him into slavery.

Joseph had grown up on the inspiration of his own dreams, which saw him ruling over his brothers. But from the purview of the pit he saw no “happily- ever-after” ending for himself. They had stripped him of his coat of many colors, also taking from him his pride, his innocence, and the years he could have been living peacefully by his father’s side. In some measure they killed everything about him, except faith and the light of G-d that burned inside him. Luckily, faith knows not shackles nor taskmasters nor pits or self pity—it sees only the light. The Bible teaches us something very interesting about Joseph’s attitude throughout his great suffering. The dungeon to which he is condemned is called Beit Hasohar, the “house of light.” Even in the depths of a dark dungeon, Joseph maintained his faith in God, he remained optimistic and hopeful and he created his own “light.” It was a house of light because he himself shone.

We must learn to do the same as we go through our own trials and tribulations. With laser-like intensity keep faith shining until it cuts right through the “dungeon” wall. It is a sin to succumb to despair and it is idol worship to believe that life is only worth living when we are riding high. In the story of Chanukah we learn how the golden Temple menorah had been stolen and there was only enough pure olive oil to last one day. The Maccabees didn’t sit around lamenting the darkness of their circumstance. They made a cheaper metal menorah. And the one day’s worth of oil miraculously lasted eight days. If only we would stoke our souls and refine our faith like pure olive oil, the miraculous light of Chanukah would be with us 365 days a year. For the soul of man is a lamp of G‑d.

All the above is beautiful and inspiring but also useless if we only have faith in Hashem but give Him  no reason to have faith in us. Joseph did not survive Egypt simply because he had faith; that would just make him a positive thinker. He survived and triumphed because G-d had reason to have faith in him. Despite all the perverse influences around him, he behaved like a Jew is commanded to behave and maintained his unique identity. The most beautiful woman in the world made daily advances toward him and he did not succumb because his father’s face and all the moral teachings of his faith guided his conscience and his deeds.

If a Jew really had faith in G-d he wouldn’t work on the Sabbath because he’d have faith G-d would provide. If he had faith he wouldn’t be scared to give charity because he’d be sure of G-d’s charity toward him.  If he had faith he would do everything so differently because a person of faith “lets go and lets G-d.” In all our worldly affairs we believe one hand washes the other, yet when it comes to G-d we are ready to collect with both hands and serve with neither. Yes, the soul of man is a lamp of G‑d but it also has a purpose in life and that is to illuminate the world with divine light. How does one do that? By living with faith and living faithfully. By showing up for active duty.By attaching oneself to the source of light, the Torah. The Torah is a flame, described as black fire written on white fire. “When the lamp [man] and flame [Torah] unite, they produce a light which fills the house–the world.” (Rabbi Elie Munk) Perfoming Torah commandments creates light for the entire world. Our faith mandates us to “shine” for all to see, just as the menorah’s lights must not be kept private, but rather placed in visible locations. We are not destined to be dim bulbs but rather a light among the nations. Jews, we are bearers of the light. That is not our calling card, that is our calling. “And the nations shall walk at your light, and the kings at the brightness of your rising. (Isaiah 60:3).

We should not be awed nor seasonally mesmerized by the lights of the Menorah. They should be humbled by the brightness of our souls. But they are not, because as Jews we are extinguishing our own lights and cutting off our own souls: intermarriage, Torah abandonment, assimilation, apathy, flickering, flickering, dying out.  Oh, woe Jewish souls. We dismiss the illuminating and preserving light of G-d’s Torah and choose artificial and ephemeral lighting instead and that’s why we are lost in darkness in a world upside down with darkening clouds gathering over our people, again. We dismiss the light of G-d and now we see the beacons of anti-Semitism flaring up and our menorahs are dying out.  No I cannot read the candles flames as I wish I could, but I can read the writing on the wall. “Ashes, ashes we all fall down.”

But “Rejoice not against me, my enemy; although I have fallen, I will rise; although I will sit in darkness, the Lord is a light to me.” (Michah 7:8)