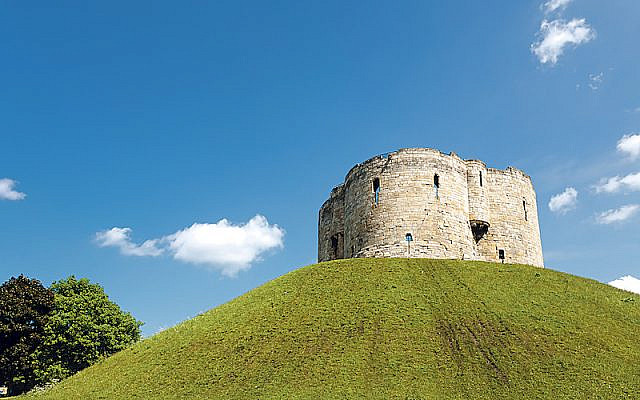 Clifford’s Tower at York, the site of one of the worst cases of antisemitic violence in Britain

It’s all the rage. Take the statues down, take down the paintings and give back the suspect charitable donations. Alright, lets look into the future – say 2100. Now what do you think people at that time will think about today’s million British alcoholics. Will they say that all the charitable gifts given to charities by Brewers and whisky makers should be given back?

How about a company called Accord which makes diamorphine, which is heroin. Absolutely legitimate today; prescribed by doctors and used by about 300 people to help their addiction. Will we go through the Accord books to see if they have made any charitable donations, so that they can be given back as well?

The contrary argument in 2100 might, quite rightly, be that what Accord produce is necessary to help cure disease. That may not, however, be the public attitude in 2100. The company could be accused, quite unfairly, of encouraging addiction.

The fact is that we can only live in the world in which we were born. Attitudes which are repulsive today, like slavery, were acceptable in the past. The slave trade in Britain was run by the Royal Africa Company in the 18th century – notice Royal – and it’s interesting that the list of shareholders doesn’t include any Jewish names. The Jews in Amsterdam did have slaves but they didn’t bring them to Britain. They invested in the Bank of England company but not in the Royal Africa.

Judaism has strict rules on slavery. After seven years the owners had to offer the slave freedom. In the Jubilee year, the 49th, the slave had to accept freedom. When freed, he had to be looked after by the owner until he was back on his feet. A recent study of American slavery suggests that the slaves were better treated by their masters than the free labourers. It doesn’t make slavery right; it would, however, have made survival easier for them than the free labourers.

Of course, the introduction of old age pensions, unemployment pay and benefits have made the plight of the poor a little better, but the way ahead is obviously to improve the benefits and not to reintroduce slavery. It’s just that we’re making our judgments by the standards of a 21st century democracy and not by those of the 18th century.

Civilisation has improved, but we gain nothing by abandoning the benefits we have received artistically, academically and charitably from our forebears.

There are plenty of other old horrors which have disappeared as well. The Scottish Law Lords after the war discovered that hanging, drawing and quarterling was still on the statute book. They abolished it straight away and said it was the fault of the English for introducing it in the first place. It had still been there for centuries.

In 1778 it was necessary for the Scots to abolish slavery in Scotland. Not Black slaves but Scots. Are we going to find the descendents of the Scottish owners and fine them? Just as bad, the last man to be burned at the stake was Edward Wightman in 1812. What are we going to do about that?

You can bring it much nearer. We only abolished capital punishment in 1965. A Jewish MP, Sidney Silverman, introduced the private members bill which finally ended it. What are the people in 2100 going to think about that?

A lot of people are still intent on taking down statues and refunding charitable gifts. Is anybody going to benefit? No civilisation is perfect. Everybody’s history is besmirched with acts of terror. Of course we wish they hadn’t happened.

Take the mass suicide of the Jews in York at Cliffords Tower in 1190. The Jews all killed each other rather than fall into the hands of the mob. There’s a plaque to mark the horrible event unveiled by the Chief Rabbi and the Archbishop of York, but it won’t bring them back. Are we going to try to punish York today because of the actions of their citizens in 1190?

The past is past. I don’t think any of us want to be responsible for the sins of our ancestors. At the same time it wasn’t all bad. There were generous actions and noble intentions. We need to concentrate on improving our civilisation still further, rather than going after the dead.