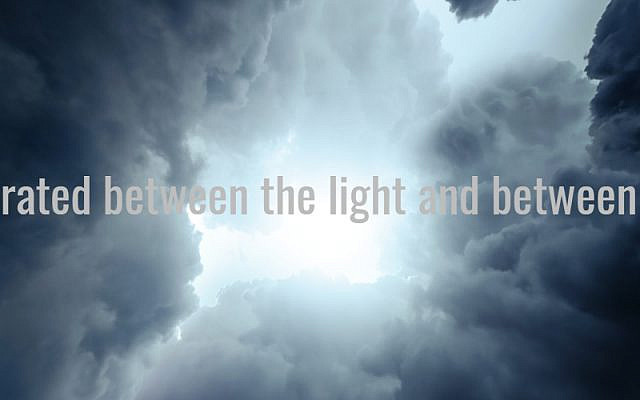 Furthermore, what does the separation between the light and the darkness mean? Is it a separation in space or in time? Does it mean, perhaps, that the light and the darkness coexist simultaneously, but at different places, that is, there are areas of space that are dark and other areas that are light? Or, does it mean that there was light at one moment, and at the other moment, there was darkness, as the next verse seems to suggest?

Another significant difficulty relates to the verse, “And there was evening and there was morning.” As we know, the diurnal (daily) cycle of morning and evening (or day and night) is due to the rotation of the earth around its axis. On the half of the planet facing the sun and illuminated by the sun’s light, it is the day, whereas, on the opposite side, which is in the shadow, it is the night. This cycle is also affected by the orbital movement of the earth around the sun.

From the point of view of the Biblical cosmogony, however, earth and sun were not created yet. What meaning could the words “morning” and “evening” possibly have before the sun and the earth came into existence?

Why is the first day called yom ahad, i.e., “one day” using a cardinal number, one, whereas all subsequent days are called the second day, the third day, etc., using ordinal numbers?[1]

It seems that the latter difficulties may point the way the resolving the first difficulty. Let us start with the problem of the morning and evening in the absence of the sun and the earth.

If we accept that this diurnal cycle predates the creation of the sun and the earth, this excludes our daily 24-hour cycle due to the rotation of the earth around its access. We can also safely exclude any notion that the primordial cycle was a 24-hour cycle comprising twelve hours of darkness and twelve hours of light, both unrelated to any planetary motion. Many satellites and, indeed, human astronauts and cosmonauts have been in the past and are presently in space, and they did not observe any such cycle—it is total darkness in space. If it wasn’t a cycle of night and day, darkness and light, what could it be? At least on the allegorical level, I suggest that this cycle refers to the cycle of time.

Ancient Greek philosophers already noted that time has a cyclical nature. This was not unique to Greeks—most ancient cultures measured time by agricultural cycles or daily cycle of day and night. Jews added the linear aspect of time—the forward movement’s notion—the notion of progress. This is also not surprising. The Jewish scriptures speak of the world’s creation in the beginning and of the messianic redemption in the future. When you have the beginning and the end, the world’s evolution from that beginning toward the end necessarily follows. Thus, in his book The Gifts of the Jews: How a Tribe of Desert Nomads Changed the Way Everyone Thinks and Feels, Thomas Cahill suggests that Jews invented the forward progression of time. However, it would be a mistake to think that ancient Jews believed that the time was only linear. Jews added the notion of the progress to the cyclical conception of time, not replaced it. The Jewish conception of time is the spiral of time—having both cyclical and forward-moving elements.

Moreover, Jewish mysticism laid a theoretical foundation for the cyclical aspect of time, based on Ezekiel’s prophesy, Maaseh Merkavah. In his prophecy, Ezekiel speaks of four living creatures—four angelic beings—who are said to be running and returning (ratzo vashov). Kabbalah and Chasidut explained that this running and returning is what sets off the flow of time—the never-ceasing time-flux.[2]

If we accept the above interpretation, it points to resolving the first difficulty—of God separating the light from the darkness.

This is precisely how Kabbalists explained the origin of time, tracing its roots to the self-contradictory construct of mati velo mati—touching and not touching. Note that this “movement” of touching and not touching comes from the ultimate self-referential construct—God. This initiative from the Creator elicits a reciprocal movement from the creations—ratzo vashov—running and returning. It is also a self-referential statement. Here is why.

Consider a godly soul—nefesh Elokit. When in a human body, it earns for its Creator. The soul experiences a suicidal tendency to leave the body and sour on high to merge with its Maker. In Jewish mysticism, it is called klot hanefesh—the expiration of the soul in ecstasy. This is the first phase of the movement—ratzo (running). Once elevated, the soul gets inspired with the original purpose and realizes that its place is down below, in the body, where it can do mitzvot (God’s precepts) and transform the world to make it a dwelling place for God. Having realized that, the soul recoils and returns to the body, only to feel once again the yarning to reunite with its source. This never-ending cycle of the soul running to and fro reflects the universal cycle of time—ratzo vashov. What is interesting to us in this metaphor is that as soon as the soul runs, it must return; and as soon as it returns, it must run—very similar to our self-referential statement, which is, as soon as its true, it is false, and as soon as it’s false, it’s true.

With this understanding, we can say that, perhaps, the coexistence of the light and the darkness before them being separated by God is the metaphor of a self-contradictory and self-referential statement. It is self-contradictory because the darkness is the opposite of the light, and the light is the negation of darkness. It is self-referential because darkness is nothing but the absence of light. Thus, before being separated, the light and the darkness are parallel to the sentence, “this statement is false.” As we attempt to construe the meaning of this statement, we must separate its two opposite meanings in time: first, if it’s true, then it’s false, then if it’s false, it is true. This is, perhaps, the meaning of why God separated “between the light and between the darkness.”

Now, it all fits together. First, God presents us with a self-contradictory and self-referential construct of the light and the darkness mixed together (although this state is only implied). Then, in the absence of man, who can construe the meaning of such a construct, God does it for us and teases apart the light from the darkness, thereby setting off the flow of time—the time-flux. The next verse summarizes the result—and there was evening and there was morning, one day—and there was first half the cycle and the second half of the cycle—one cycle of time in total, one quantum of time, one chronon.[4]

[1] As it is well-known, Rabbi Shlomo Yitzchaki (Rashi) explains this inconsistency on a literal level by saying that at the end of the first day, there were no other days yet to call it the first. This is a literal interpretation.

[2] It is explained at length in the series of discourses called Samach Vav by the fifth Rebbe of Chabad-Lubavitch, Rabbi Dovber—the Rebbe Rashab.

[3] Chronon—a  quantum of time was first introduced by Robert Lévi in 1927. See Lévi, Robert (1927). “Théorie de l’action universelle et discontinue.” Journal de Physique et le Radium. 8 (4): 182–198. A quantum theory, in which time is a discrete variable, was proposed twenty years later by Chinese theoretical physicist and Nobel Laureate Chen Ning Yang (Zhenning) in 1947. See Yang, C N (1947). “On quantized space-time.” Physical Review. 72 (9): 874. A further development is to be found in the work of Piero Caldirola in 1980. See Caldirola, P. “The introduction of the chronon in the electron theory and a charged lepton mass formula.” Lettere al Nuovo Cimento. 27 (8): 225–228. In my toy model, which I proposed in 1973, I used the Planck time as a quantum of time to replace continuous derivatives with discrete differentiation based on finite differences, which I independently developed while in high school.