I personally believe that the lousy and dangerous deal Obama and Kerry agreed to sign with Iran is a lousy, very lousy deal that America will pay for dearly.

I also believe that Congress has no chance on earth to turn it down or turn down Obama’s guaranteed veto should congress succeed in turning it down on first round. Obama had no legal right to capitulate to Iran and he did. Every American represented by a Congressman should oppose the deal, never mind party line. This deal is America’s collective shame.

I need to add that Barack Hussein Obama is a combination of our time of Neville Chamberlain, a coward capitulator who signed a feckless agreement of “peace in our time” with Hitler (Today replaced by the Islamo-Nazi Mullahs in Iran), and Vidkun Abraham Lauritz Jonssøn Quisling, a Norwegian politician, a traitor who collaborated with an enemy force – Nazi Germany (today is replaced by the Islamo-Nazi Iran’s regime) — who on 9 April 1940, with the German invasion of Norway in progress, he seized power in a Nazi-backed coup d’état.

When Chamberlain signed the Munich Agreement with Hitler, Britain (and France too as these two countries were the only European powers at that time that would have been expected to stand to Hitler) was in poverty and had no military force to defend the country from German-Nazi aggression.

But the United States is not Britain of 1938 and is not in the same situation Britain found itself in 1938. As so many commentators indicated, this agreement is the world over diplomatic disaster Obama is selling through huge Swiss cheese holes of lies and deception. In 2013, when Obama signed an interim agreement with Iran, Iran was on the verge of economic collapse, 6 months to go and the collapse would have happened. The 2013 interim agreement Obama and the-P5+1 signed entitled Iran to enrich uranium and released to them some money. That is a treasonous move, enabling an avowed US enemy to develop weapons of mass destruction.

We cannot afford it and we must not!

Best, we do not let ourselves be the world of WWII and Jews throwing their hands up. 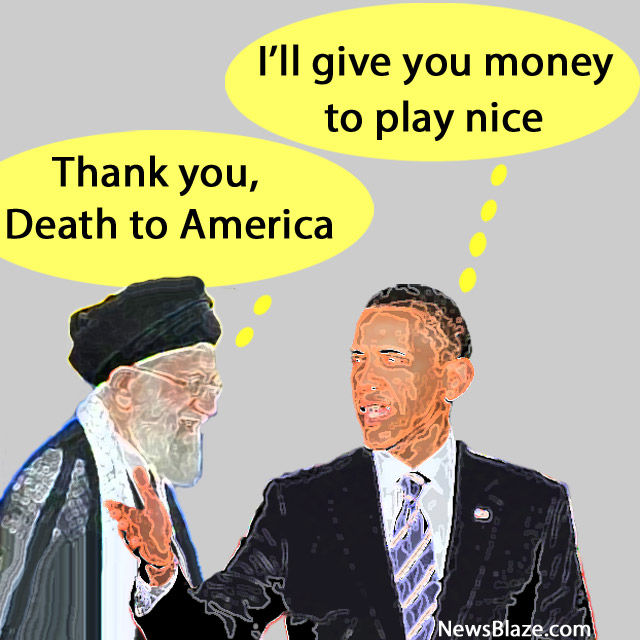 Obama freezes Netanyahu out of the discussions . What could go wrong?

Who Can Help Stop This Lunacy?

Last week, Chaim Saban, a huge supporter and donator to Obama’s on going campaigning and now also Hilary Clinton’s donor and supporter, had a 90 minutes private meeting with Obama telling him he opposes the deal Obama signed with Iran. Saban’s protest went form one blocked ear to another of the narcissist Obama. He will never admit he has made an awful blunder; this is his legacy even if it is going to kill many and spark a war. Obama is a Neville Chamberlain of our time but only worse because Chamberlain was fired Obama stays.

What Saban needs to do is publically call on Hillary to renounce the deal. He has all the reasoning information as to why. Saban needs to tell the Democrats that if they do not override Obama’s veto he is withdrawing all his funding from the Democratic Party and encourage other peers to do the same.

SINCE the deal was signed Iran has stated, over and over again, that it still wants to destroy the USA (and Israel). Also, where is Saban Brookings Institute? The head of this entity needs to condemn the deal too, otherwise Saban needs to fire him.

Everyone who is loyal to USA needs to condemn the deal and that includes every congressman and senator.

Why The Left Wins

As for Jews, let us not be like Europe’s WWII Jews, like my maternal and paternal grandparents who gave up completely and without a fight and became Hitler’s ashes. Rather, we need to be like the Left, never give up, even after a deal is done we need to return to how bad the deal is, how Democrats and the Left were for the deal and now look what Iran is doing. That is why the Left wins, why they change people’s minds, and we, on the Right, say we lost, act as losers, we go home with our tail in between our legs!?

The deal with Iran is a very, very bad deal for ALL Americans, injurious to America; fight to turn it down, fight this to the very last moment.