This is being distributed:

Prime Minister Benjamin Netanyahu and his wife Sara, last night (Thursday, 10 September 2015), visited the British Library in London where they were briefed on the library in general and two items in particular — the original Balfour Declaration, in which UK Foreign Secretary Arthur Balfour declared that Britain would support the establishment of a national home for the Jewish People in the Land of Israel…

Two years ago, I sent to the Prime Minister’s office, to several ministers and since then, to ministers in this new government an idea of mine which is to mark, celebrate and highlight the upcoming centenary of the Balfour Declaration — 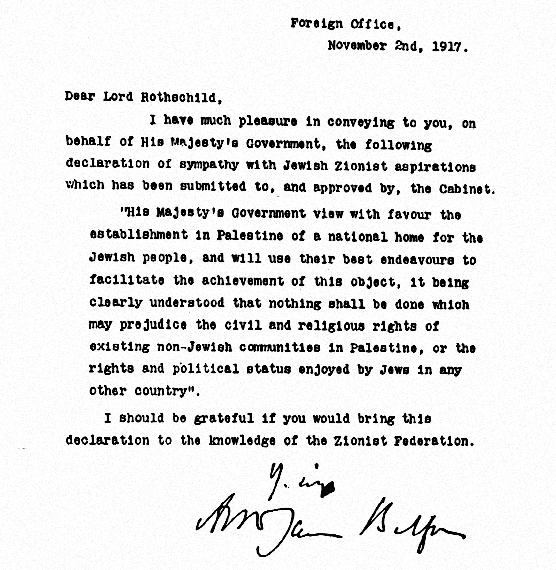 Okay, I admit, the Arabs and their supporters have beat us to the idea.

Their aim includes this:

We are seeking more awareness, primarily in Britain, of the Balfour Declaration’s intentions and consequences; particularly the failure to implement its second clause, which promised to safeguard the rights of the Arab population in Palestine.

Not to be too picayune but “Arabs” per se are not mentioned but rather “non-Jews”.  That was purposeful since the country was to become, upon the agreement of the Principal Allied Powers

to entrust to a Mandatory selected by the said Powers the administration of the territory of Palestine…within such boundaries as may be fixed by them; and…that the Mandatory should be responsible for putting into effect the declaration originally made on November 2nd, 1917, by the Government of His Britannic Majesty, and adopted by the said Powers, in favor of the establishment in Palestine of a national home for the Jewish people, it being clearly understood that nothing should be done which might prejudice the civil and religious rights of existing non-Jewish communities in Palestine…[this] recognition has thereby been given to the historical connection of the Jewish people with Palestine and to the grounds for reconstituting their national home in that country;

Note the use of “communities” — not a people, not an ethnic group nor a national collective.  Arabs, as Arabs, had, at that time, six other countries existing or being developed.  Arab’s civil and religious rights are preserved and well-protected, more than in any other Arab state of which there are 22.  The country was meant to be Jewish as in the UN’s recommendation

Independent Arab and Jewish States and the Special International Regime for the City of Jerusalem, set forth in Part III of this Plan, shall come into existence

The Arabs, having not only rejected that resolution but launched a war of aggression against the will of the UN, forfeited any privileges to demand a rollback of all that has gone on.

It is indicative of the site’s owners that they also include this at their FAQs, that they

believe that we should, individually and collectively: acknowledge where British policy towards Palestine was marked by duplicity, denial and racism;

The site itself is a paragon of duplicity and mendacity.

To counter that anti-Zionist effort I suggest that my initiative be established – and I’d be willing to be a member of its steering council – and that it set up a site, produce educational material, convene a conference on Thursday, November 2, 2017 and much more.