I don’t usually think ‘Muslims’ when I daven!

But something struck me hard in the middle of ‘al hanisim’ (for all the miracles) the first morning of Chanukah.

When the wicked kingdom of Greece
stood up against your people
to make them forget your law,
and to make them turn away from your statutes

The Greeks wanted to wipe out our religion, reversing Alexander the Great’s policy of benign pluralism. As I read, I remembered the legends of Jews forced to eat pork or die, the erection of idols in the Temple, the edicts prohibiting the sabbath and other Jewish practices. Then I suddenly recalled the recent grainy mobile phone footage I’d seen of Uyghur Muslims forced to eat pork and drink alcohol! 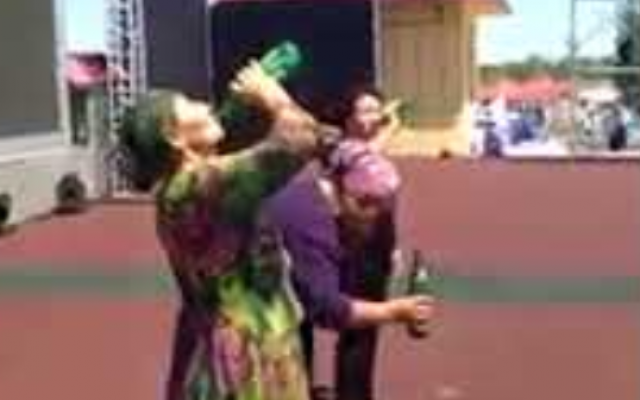 Their mosques have been closed, their holy books burnt, and anyone religiously active is interred in the Concentration Camps of Xinjiang. These concentration camps are real! They are not, as China claims, voluntary re-education camps. The aerial photos used to look identical to Auschwitz, but for the absence of crematoria. Except now, we know there are crematoria. The Uyghurs have had their own ‘Wannsee moment’ with the leak of the ‘China cables’ revealing Xi Jinping’s own Politburo policy documents describing plans to “concentrate” them in “camps”. There are videos of Uyghurs being rounded up to “donate” biometric data (DNA, voice prints, facial recognition and retina scans), their “Yellow Star.”  Up to 3 Million Uyghurs in these Concentration and other prison camps suffer torture, murder, starvation, medical ‘experiments,’ sterilisation, with escapees’ accounts trickling out into the public domain. This all sounds so familiar to us Jews.

There are differences from the Nazis’ camps. Rape is a widespread means of torture and punishment. There is forced abortion. Live organ harvesting. The death count, although unknown, is probably less, and the average life expectancy probably longer than the 4 weeks in Auschwitz, and the numbers incarcerated on any one day can be higher. People are released, after “re-education” as “good Chinese Communists,” brainwashed, altered or broken. Outside the camps, into the homes of interred men are inserted male Han Chinese communists to “befriend” their family and sleep in the same bed as their wife. Uyghur women are also forced to marry Han Chinese, the new ‘Aryan.’

The Germans never wanted us to become “good National Socialists,” nor did they want to marry our women. They just wanted us gone. Their end game was that of the Persians of Purim: our complete physical extermination. China’s end game is that of the Greeks of Chanukah, the destruction of a religion. There is no doubting the final aim of either: annihilation of a religious ethnic group. Ethnocide.

There is one other critical difference. When news of the Nazi camps first trickled out, the incredulous world took little action. Today, the world is stirring even though Muslim nations are this week accused of silence by the German World Cup Winning footballer, Mesut Ozil, himself a Muslim. The American Congress voted 407-1 for the ‘Uyghur Act’, requiring the President to condemn their persecution, call for closure of the camps and take sanctions against responsible Chinese officials, specifically Communist Party secretary Chen Quango. Now that’s really “Making America Great Again!” The EU parliament this week adopted similar measures.

Action is also being taken against the flagship Chinese Telecommunications firm, HUAWEI, which developed the surveillance techniques facilitating internment of Uyghurs for “terrorism” or “religious extremism,” such as growing a beard, quitting alcohol or owning a prayer rug.

Run by the Chinese Communist Party, HUAWEI conducts industrial and security espionage across the world. President Trump has barred use of its equipment in the US, and purchase of US equipment by HUAWEI. The intelligence risks may be uppermost in his mind, but Human Rights considerations are factors in Norway’s removal of HUAWEI as key technology provider for its 5G network. Australia has done the same and protested about the Uyghurs. Italy’s parliamentary security committee recommends blocking any role for HUAWEI and ZTE (Zhongjing Telecommunications Equipment, part owned by the Ministry of Aerospace) in their 5G networks. The German parliament is requesting their government follow suit for security and human rights reasons.

Internet and Twitter are awash with petitions. Some cite Olympic charter clauses on human dignity and rights to request corporate sponsors and the International Olympic Committee to remove the Winter Olympics 2022 from Beijing. Republican Senators are pressing TV networks not to air it and thus “place profits over principles.” Republicans! Who’d have thought?! Nothing major, however, can happen unless Governments themselves take action, sometimes under pressure from civil society. The scene is set. Can the world take action in 2020, that they did not take 80-90 years ago?

By co-incidence, in the Parashah we have just read, as Benjamin lies captive, falsely accused, Joseph is testing his brothers, according to Ramban, to see if they will abandon Benjamin as they once abandoned him. They go through remorse and confession, the first two of Rambam’s stages of teshuva (repentance). The parashah closes, with the scene set for the final stage- not making the same mistake in the same situation. True repentance means ‘never again.

Whilst we wait for the World’s decisive action on the Uyghurs, Jews and Israel have a role. As Hillel says (Shabbat 31a) ““What is hateful to you, do not do to your neighbour.” We know what it is like to suffer this way with none to rescue us, so should come to the rescue of those suffering the same. “If I am just for me, what am I? If not now, when?” (Avot 14.1), Hillel again. His aphorisms are based on what Rabbi Akiva calls ‘the great rule’ of “Love your neighbour as yourself” (Vayikra 19.18). Raphael Shimshon Hirsch is clear, “neighbour” means “fellow man” not just fellow Jew. When the Torah says, “Do not stand over the blood of your neighbour, I am Hashem” (Vayikra 19.15), Rashi comments (and I paraphrase here) that inaction in the face of another’s impending fate renders one’s own life forfeit, in the divine scheme of things.

In a recent ToI blog, Adi Weitzhandler, advocated as much Israeli economic and technological (including AI) co-operation with China as possible. Human Rights issues are not mentioned and intellectual security risks downplayed.  The dynamic, Adi, has shifted. Our history and moral inheritance mandate us to encourage this shift, for genomic and AI technological advances in China pose major ethical problems including “specific ethnic genetic attacks.”

Indeed, Israel now has some skin in the game as the ancient Jewish Community of 1000 is forbidden to meet on shabbat and even the plaque marking the site of the old synagogue has been removed.

China wants to reclaim its global pre-eminence which preceded Western Imperialism.  It seeks economic prosperity for its citizens and respect from the rest of the world. Despite its economic power, through the belt and road initiative and the lucrative markets it offers, it is vulnerable to economic pressure, loss of face and internal dissent.   Economically, selective world sanctions on flagship companies like HUWAEI or Beijing Genomic Inc and major industries like cotton production, which uses large amounts of forced Uyghur labour, threatens its prosperity. So would cessation of World Bank Loans (surely their economy is too big now to justify these?) Loss of face would follow removal of both the Winter Olympics and membership of the UN Human Rights Council, and preparation of legal cases against Chinese leaders at the Hague. Withdrawal of selected research collaborations and studentships in western universities and expulsion of Chinese doctors from international medical meetings until forced abortion, sterilisation and organ harvesting stops would be a source of shame. Internal dissension must already be present, for someone high level released the 390 Uyghur Policy documents. Dissension will be exacerbated by economic sanctions. Already, the economic benefits of flooding the Xinjiang area with Han Chinese are declining as the Uyghur work force numbers fall and the Han demand to be allowed to return home.

That may not represent the ideal to us but it’s a pragmatic way to #ClosetheCamps. If benign pluralism was good enough for Alexander the Great, it should be good enough for Xi Jinping…..

…. and then the Uyghurs might be able to enjoy their own ‘Chanukah’ next year, and say to us in the words of the “al hanisim” prayer