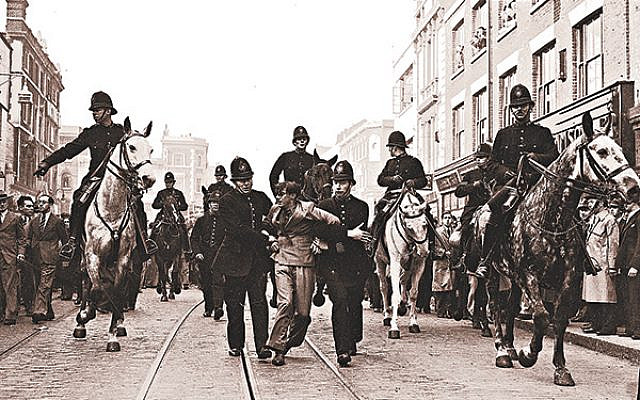 The problem of antisemitism has been with us for centuries. How to deal with it involves governments in many countries around the world.

Now we have a tradition of learning from our sages, no matter how long ago they made their pronouncements. We quote Rashi and Maimonides as if they were being interviewed by The Times yesterday.

So it’s worthwhile learning from Stanley Baldwin, who was the prime minister before the Second World War. Baldwin was concerned about the growth of the British Union of Fascists led by Oswald Mosley. They supported Hitler, and their rallies were said to be studded with hate speeches and antisemitism.

So Baldwin sent one of his back benchers to a rally in Earls Court. to learn at first hand what they were like. The MP was appalled at the violence he saw meted out to protesters. He reported back that such behaviour was totally unacceptable in our democratic country. It was agreed that the Fascists had to be undermined.

Baldwin had a dilemma. Antifascism was associated with the Communst party and he was leading a Conservative government. To be seen to support left wing efforts could be regarded as sending the wrong message to his members.

So Baldwin took a different approach. He had a discussion with Lord Reith who was the head of the BBC. He didn’t announce publicly that he was doing so but he agreed with Reith that the best way to undermine the Fascists was to deprive them of publicity. He agreed with Reith that Mosley would never again be allowed on the radio – there was no TV. Mosley was never heard on the radio again.

Deprived of publicity and unable to get his message over, the Fascist membership dropped substantially. It had never had more than 50,000 members and by the time the war broker out, there were only a small number of leaders who needed to be interned.

Now Margaret Thatcher  took a different approach with the IRA in Ireland. She also wanted to deprive them of publicity but the argument for free speech prevented her from doing so for many years, until a broadcasting ban was introduced in 1988.

Baldwin didn’t tell parliament what he had agreed with Reith. He would have come up with the same resistance if he had. It was many years before the story came out.

The question is what should Boris Johnson do today? The publicity for antisemitism is in all the papers all the time. Reports of the numbers of incidents are blown up out of all proportion. A few cars shouting antisemitic slogans go through North London and you would imagine from the publicity that they represented a positive army of antisemites, instead of a  totally minuscule group of nutters. Nutters who would be charged with public orders offences in court in due course.

We need to treat these people as just as influential as those who want to make teaching ancient Greek compulsory in schools. If there were reports that talked of mass movements with posters in Greek, increasing support – which means from 5% – 6% – accusation of bias against Greek teaching by the MP for Upper Diddingsworth and massive rallies akin to cup finals in Wembley, the subject would sell the Times Educationsl Supplement, but there is no such publicity.

We need to stop talking interminably about a tiny number of our fellow citizens who don’t like Jews. Abut the same number as don’t like Druids. We have the government and the courts, the Royal family and local councils firmly in favour of multi-nationalism and against racism. To talk of whether Jews are safe in Britain is the equivalent of wondering whether the great storm of 1987 foretold a new Ice Age. No, it didn’t, and it’s long forgotten.

Of course, good news doesn’t sell papers as well as potential or actual disasters. We home in on the less than 10% racists and not the 90% who despise it. It’s high time we turned our attention to the unnecessarily high price of petrol.