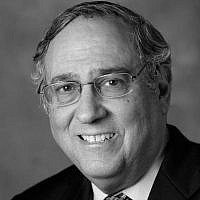 The Blogs
Steven Bayme
Apply for a Blog
Please note that the posts on The Blogs are contributed by third parties. The opinions, facts and any media content in them are presented solely by the authors, and neither The Times of Israel nor its partners assume any responsibility for them. Please contact us in case of abuse. In case of abuse,
Report this post.

“On Questioning the Jewish State” is the title of Joseph Levine’s recent contribution to Opinionator, a New York Times blog. Professor Levine, who teaches philosophy at the University of Massachusetts, argues “that one really ought to question Israel’s right to exist and that doing so does not manifest anti-Semitism.”

This denial of anti-Semitism is a key part of his case, since he indicts the American Jewish community for shutting down criticism of Israel by conflating it with anti-Semitism. But there has never been a shortage of critics of Israel, some of them Jewish, many going so far as to argue against Israel’s right to exist. While the mainstream Jewish community has argued against them vociferously, few equate their position with anti-Semitism in the absence of evidence to the contrary.

Since I have never met him, I cannot even guess whether Professor Levine, who relates that he was “raised in a religious Jewish environment,” has any anti-Semitic motivation. But his case against the legitimacy of the State of Israel is fatally flawed nonetheless.

Levine claims that by privileging the rights of Jews over non-Jews, the Jewish state is inherently undemocratic, and hence illegitimate. In fact, the core democratic freedoms of speech, the press, and religious expression are alive and well in Israel, for Jews and non-Jews alike, as the Israeli media has demonstrated in its outspoken criticism of successive governments, policies and political leaders – including current Prime Minister Benjamin Netanyahu. Elections are decided by universal suffrage and contested by a bewildering multitude of parties. Transitions of power are seamless. And Israel’s High Court acts to guarantee the rule of law and preserve civil rights.

Is Israeli democracy perfect? By no means. Israel has an unfinished agenda of providing de facto, not just legal, equality for Arab and other non-Jewish citizens, and complete religious pluralism within all faiths. But no democracy in history has been perfect, including the American model. Certainly, Israel compares favorably with other democratic societies.

What so irks Levine – the idea of a Jewish state – has been accepted as quite natural by most of the world. Zionism represented, for Jews and also for others influenced by the Bible and by rising waves of anti-Semitism in Europe, the aspiration to realize the age-old dream of return to sovereignty and statehood in the Jewish ancestral homeland after 2,000 years of exile. Two decades after Theodor Herzl launched political Zionism by writing The Jewish State, Great Britain, in the Balfour Declaration, declared its support for a Jewish commonwealth in Palestine, a principle adopted by the League of Nations after World War I.

Since the quest for a Jewish homeland conflicted with the national desires of Palestinians living there, the international community, in 1947, partitioned Palestine into a Jewish and an Arab state. While the Jews accepted this compromise, the Arabs refused and went to war – unsuccessfully – to prevent it.

Since then there have been several further opportunities to create a state of Palestine, all, in the end, turned down by the Palestinians themselves. A key factor in Israel’s desire to reach a two-state agreement has been the realization that to remain a Jewish state it must retain a Jewish majority. And so today, Prime Minister Netanyahu stands ready to enter negotiations with the Palestinian Authority, but his proposals have thus far fallen on deaf ears.

Levine’s call for one state in Palestine is surely the worst of all possible alternatives. Longstanding antagonisms between Jews and Arabs would set the stage for endless violence – just recall the recent experiences of bi-national states in the Balkans.

Professor Levine joins Arab leaders in insisting on the complete dismantling of Israel as a Jewish state. Yet the logic of partition and the argument for a Jewish state is no less compelling today than it was in 1947.

About the Author
Steven Bayme is the American Jewish Committee's director of contemporary Jewish life and a founding member of PORAT.
Comments