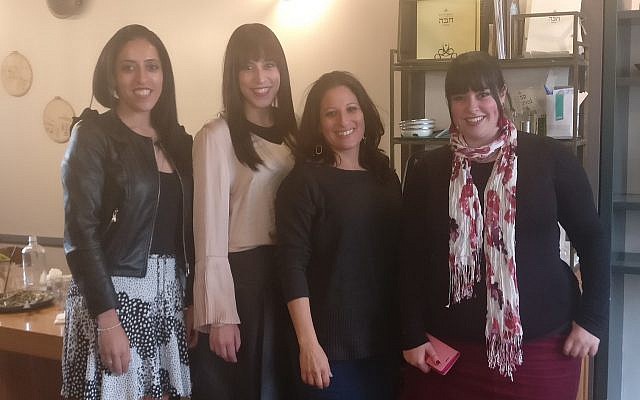 Ellie Sapper, Nicole Meyer, me, and Dassi Erlich, in Jerusalem, in November 2018. (courtesy)

In November 2018, I sat with Elly Sapper, Dassi Erlich and Nicole Meyer, the three sisters from Australia who have been working for years to bring their alleged sexual abuser, Malka Leifer, to justice. They were in Israel to try and pressure a justice system that they knew was being manipulated, even if they didn’t know by whom.

We sat there discussing possible culprits. Health Minister Yaakov Litzman was at the head of the list, along with a number of other rabbinic leaders in the Haredi world. As it turns out, we were right. It became clear this past month that numerous rabbis have been working to prevent Leifer’s extradition.

Who Is Malka Leifer?

Leifer is a former girls schools principal who stands officially accused on more than 74 counts of molestation of girls from Australia in Australia, and unofficially of many more girls in Israel and Australia.

She headed the ultra-Orthodox Adass Israel girls’ school in Melbourne from 2003 to 2008, with some saying she moved to Australia to begin with because of accusations of abuse in Israel.

When allegations began to emerge in Australia that she had sexually abused between eight and 15 of her students, a plan hatched by the school’s administration had Leifer on a plane back to Israel.

Australia officially filed an extradition request in 2012, yet Leifer was first taken into custody in Israel in 2014, and later released to house arrest.  She evaded justice here in Israel with delays and claims of ill health. Most recently, in June 2016, testimony from a state-appointed psychiatrist claimed that Leifer was unfit to stand trial. This led to a Jerusalem District Court halting extradition efforts, citing a law that permits stopping proceedings when a defendant is deemed unfit to stand trial.

Many doubted the mental health declaration and indeed, a private investigation run by Jewish Community Watch, a US-based group, tracked Leifer and showed conclusively that she was indeed mentally fit. As a result, she was re-arrested last February.

Who Is Helping Malka Leifer?

The following figures of the Haredi world are supporting the alleged abuser, some behind the scenes, some in the open.

Health Minister Rabbi Yaakov Litzman of United Torah Judaism: After a months-long undercover operation, the police questioned Litzman on suspicion of pressuring a court psychiatrist to falsify his psychiatric report that prevented Leifer’s extradition on medical grounds. Police supposedly have recordings of Litzman and officials speaking to Health Ministry employees and pressing them to act on Leifer’s behalf.

Rabbi Menachem Mendel Shafran of Bnei Brak: Shafran came to court to support Leifer and gave his blessing to have Leifer put under house arrest at the home of girls’ school principals.

Rabbi Yitzchak Dovid Grossman of Migdal Ohr: testified on her behalf and offered to house Leifer until he came under tremendous fire from supporters of his network of programs for orphans.

Rabbi Yosef Direnfeld of the Belz community in Ashdod:  Direnfeld put out a heartfelt plea call for donations to “save” Leifer. “An important woman, the daughter of the great and the righteous… has been imprisoned for a long time under harsh and cruel conditions… for the purpose of extraditing her to a gentile state.”

Why Are Rabbis Helping Malka Leifer?

Support for Leifer is being deemed “Pidyon Shvuim” — a serious commandment of redeeming captives that effectively created a moral imperative to save young Jews enslaved by the Romans, held by the Spanish Inquisition, in the Russian Gulag or even modern day Iran, but would be hard to apply to this case of an accused pedophile being extradited to a democratic country to face her accusers in a fair trial.

And those of us with knowledge of Jewish history might be tempted to sympathize — IF these Hasidic leaders showed any attempt at safeguarding children from Leifer by ensuring that she be prevented from access to them.

Note: It is important that Leifer’s protectors are Hasidic. Because Hasidic communities are predominantly insular, they often have their own rules. Each sect is run according to the word of its Rebbe. What he says, goes.  If the Rebbe says to exclude children from school, they are excluded. If he says shun this woman for asking for a divorce, she is shunned, and if he says raise money for a woman who is righteous and being persecuted unfairly, the Hasidim raise money. This can also work to the benefit of the community, rallying around those in need, but only if the rebbe chooses.

Had the Rebbes decided to shun Leifer and protect their community- they could have done so. It is within their power. But, instead, they chose to protect Leifer, and in so doing dismissed the sisters and their claims of child sexual abuse.

The Response to the Sisters

In January, when the sisters were in Israel, they were at the Knesset to drum up support for extradition with lawmakers. MK Yehuda Glick was their guide through the hallways, and when their paths crossed with that of MK Litzman, Glick introduced them. It seemed providential, since Litzman had repeatedly refused the sisters’ requests to meet with them. Until he exclaimed: “I want nothing to do with this! I’ve heard the other side of the story. I will not support the extradition!” The women maintain that he did tell them he would “not interfere with the extradition either.” which, according to police and their recordings, was a boldfaced lie.

And last week, here again for another hearing on Leifer’s health and possible extradition, they met with Rabbi Shafran. In a heartbreaking Facebook post, Dassi Erlich described their meeting. They asked the rabbi why he supported Leifer. Shafran replied:

“It’s my duty as a rabbi to support a fellow Jew”.

When asked why Leifer’s Jewishness deserved his sympathy over their own, he refused to answer them. Instead, he explained the importance of supporting the underdog — in this case, he estimated, the alleged abuser. The girls were left deeply pained by this meeting.

I am not a Hasid, and do not live in the Hasidic world. Yet, I and others in the broader community are left asking how rabbis, supposed caretakers of our physical and spiritual well being, trade the freedom of one alleged abuser for the well being and safety of her victims, and the many more children to whom she has access.

The safety of the community’s own children has been disregarded in the rabbis’ push for Leifer’s protection. Indeed, according to parents in Immanuel, the town that offered her shelter and its trust largely based on the support of these rabbis, she has done it again.

Litzman, in his only public statement since the accusations against him, claimed to be working for the public’s benefit and according to the law.  What public and whose law??

This battle to protect an alleged abuser proclaims to all abusers that they can find a safe haven among the Hasidim in Israel. It is an painful declaration to all victims, letting them know they will not be believed nor protected.

What Can the Concerned Public do?

It is clear to me that the right thing to do is extradite Leifer to Australia so that her alleged victims can seek justice in a fair trial, and to caution every abuser and anyone thinking of abusing children that the Jewish community will not allow our children to be harmed — not even if it means facing a non-Jewish court.

Our children must mean this much.

On Wednesday, March 13th, a general protesting public congregated outside the district court house on Salah Ah Din Street in Jerusalem. The demand was that Leifer be extradited, and our protest is that the abuse of children and the protection of their abusers will not be tolerated.

Follow the sisters’ journey and offer them your support.