My son Dan, just out of college, has been participating this year in a new, immersive volunteer experience in Israel called Yahel Social Change, one of the volunteer opportunities sponsored by Masa Israel; his placement is in the diverse and utterly under-appreciated city of Lod.

Israelis typically giggle or gasp when I tell them that my son is working in Lod.  Left-leaning friends call the place an armpit of corruption, crime and neglect.  Right-wingers, even those from the most perilous settlement outposts, say they would never set foot in Lod because “it’s too dangerous.”  When Israelis see Lod on the news, it’s because that’s where the police bring wayward politicians (and the occasional Prime Minister’s wife) for interrogation.

Those who have read Ari Shavit’s book, “My Promised Land,” will recall that Lod (also known as Lydda) was the place where tens of thousands of Arabs were evicted at the time of Israel’s birth.  He calls Lydda our “black box,” wherein lies “the dark secret of Zionism. If a Jewish state was to exist in Palestine,” he adds, “an Arab Lydda could not exist at its center.”  Lod, this crime infested, neglected, godforsaken, dangerous, miserable overgrown slum, also stands at the existential core of the Arab-Israeli conflict.

And I sent my son there.

Actually, Lod has been given a bad rap. It’s one of the most ancient cities in the world, by some estimates over 8,000 years old.  It’s mentioned in the Bible, was home to famous leaders of the rabbinic era, (and a Sanhedren met there) but it was subsequently emptied of Jews during the Muslim and Crusader periods.  The Jews simply returned the favor in 1948.

Despite its relative obscurity, Lod is strategically situated on ancient trading routes much like Megiddo in the north; it’s nestled where the mountains meet the coastal plain and it remains an indispensable center of international trade and transport to this day. Ben Gurion airport lies just a couple of miles to the north.

The city boasts a gorgeous archaeological mosaic that has been displayed at the Louvre, featuring animals harmoniously coexisting; similarly, Lod prides itself on being a mosaic of cultures and is one of the few places in Israel where Jews and Arabs of all backgrounds find common ground.  This city of 77,000 is gaining notoriety for its diversity, a mix of Muslim and Orthodox Christian Arabs, including Bedouins, added to Jewish immigrants from the former Soviet Union, Ethiopia and elsewhere, and a jumble of religious and secular Ashkenazim and Sephardim.

During a recent week-long trip to Lod, I discovered that the city of shattered dreams in 1948 is fast becoming a gateway to reconciliation in 2016.

Unlike other mixed cities, including Jerusalem, here the populations coordinate activities together, like a monthly night crafts market.  Lod demonstrates that in an increasingly polarized world, diversity can be a priceless asset.  While the rest of Israel has been reeling from the recent violence, including attacks in Ramle, Lod’s next door neighbor, Lod has remained peaceful.

When my wife and I visited the Arab school where Dan is volunteering, we were greeted like royalty.  Co-existence and friendship are at the core of the curriculum.  Classrooms are plastered with banners and quotes, like the one from Pirke Avot, “Don’t look at the flask but at what is contained within it.”  The students are being taught precisely how not to have hatred toward the Other.

The kids peppered us with questions and clamored for selfies.  “You’re Dan’s mother and father,” they said to us, wanting to practice the words “mother and father” in their rudimentary English. They asked us about America, wanted to see pictures of our dogs, and were especially interested in the wonders of New York and Disney World.  On another day, three Ethiopian Jewish children, who are taking an after school music class with Dan, regaled us with a song and dance performance to Disney’s “Let it Go.”

English, I realized, is something more than just another language for these kids – it’s a lifeline to a better world, a place, where optimism soars like tall buildings and Disney princesses colonize the streets, rather than fedayeen or police.

One of the Arab girls, Hilba, a top student, came over to tell us that until recently she wasn’t confident speaking English. “But because of Dan, I love English.”

I’m not naïve enough to say that one volunteer program is going to change the world.  But I know that at least one group of Arab middle schoolers now has had a positive encounter with Jews – and with Americans – one that differs greatly from the images that they have seen both in the media and on the street.

I don’t know at what age people begin to mistrust, but I do know that hatred can be arrested, because I saw that in Lod.  While there is undoubtedly horrific incitement happening in other places, in this place there is only excitement, the excitement of learning.

The teachers were also thrilled to see is.  When one of them asked what I do and I replied “I’m a rabbi,” she seemed shocked.  I guess I also didn’t seem like rabbis she has met before.  We are all the face of Judaism, and, at least in this school on this day, Lod was able to get accustomed to that face, quite easily.

On a recent springlike day, a huge pile of snow was trucked from Mt. Hermon into Commando Square next to Lod’s Municipality Building. Dan watched Jewish and Arab children frolicking in the white stuff, separately but together, and expressed amazement at “the creation of a space where Jews and Arabs from across backgrounds could share their joy and leave judgments aside.”

He added in a blog posting, “Just as Arab and Jewish kids can play in the snow next to Lod’s government office building, Arab and Jewish adults shop together at the shuk and attend a performance together at the Heichal Hatarbut (Culture Hall). If that is the case, and all the city’s public spaces can be inhabited peacefully by both groups together, what is to say that Arab-Jewish coexistence is impossible and Lod cannot be a mixed city?” 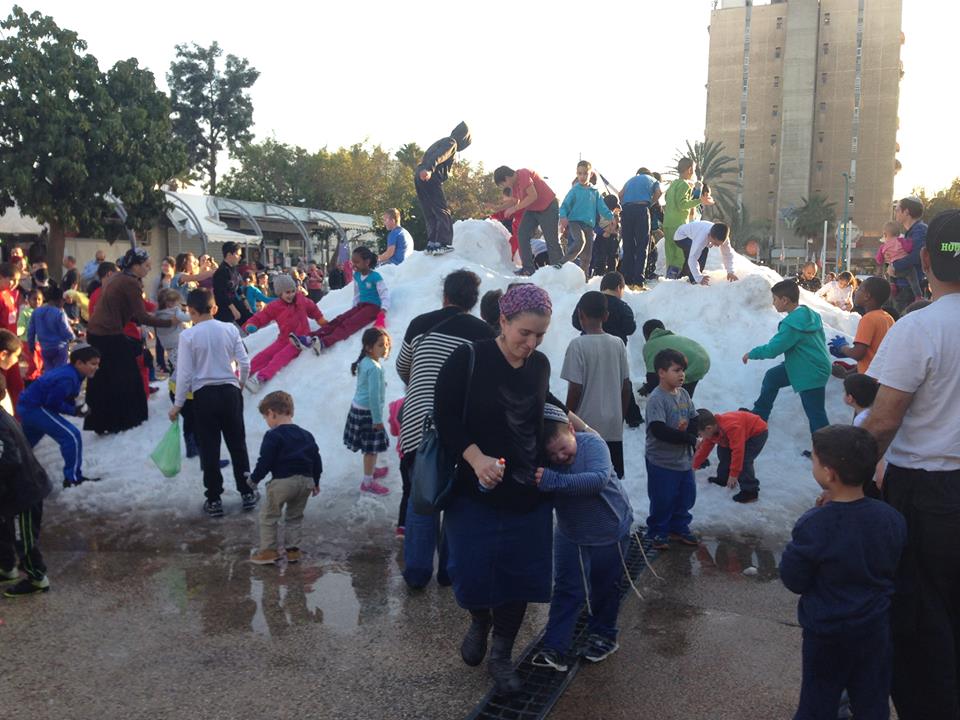 Lod, nestled on the rolling ancient crossroads where the Sharon meets the Shefela, could end up as Israel’s City on a Hill.  Islamic lore posits Lod as the place where the Devil will be slain, and Christians believe that at the city’s Church of St. George, Jesus will slay the Antichrist.  Maybe those ancient prophecies are in some manner prescient.

For Muslims, Christians and Jews alike, Lod is where hope is being reborn.

The Lod Mosaic’s imagery has no overt religious content, making it impossible for experts to determine whether it was commissioned by a pagan, a Jew, or a Christian.  Yet each of its animals appears to thrive in their shared habitat.  Even the animals, it appears, are able to look not at the flask, but at what it contains. People could learn a thing or two from them.

Maybe this little city, mocked by Israelis but loved by the Louvre, this proverbial Black Box, can become the place where Jews and Arabs will learn to live in harmony.  How fitting that would be.  Lod is the living embodiment of what the Psalmist had in mind when saying that the stone rejected by the builders shall become the cornerstone.  Maybe Lod can be the place where hope is reborn. Having visited, I now understand why Dan has entitled his blog, Live. Love. Lod.