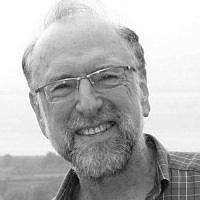 The Blogs
Sheldon Schreter
Apply for a Blog
Advertisement
Please note that the posts on The Blogs are contributed by third parties. The opinions, facts and any media content in them are presented solely by the authors, and neither The Times of Israel nor its partners assume any responsibility for them. Please contact us in case of abuse. In case of abuse,
Report this post.

Both sides to the Israeli-Palestinian conflict have entrenched myths about themselves and each other which serve to perpetuate the mutual animosity and make it seem unchangeable, eternal. These basic perceptions are at the root of the conflict, and determine its parameters. The Jews or Arabs who have sought to build bridges between them seem all to have fallen short so far. Is there really no hope of breaking the cycle of hatred and blood-letting?

One approach has been to encourage the sides to re-evaluate their myths and adapt them so as to make shared life possible. The Palestinians would have to relinquish their foundational belief in their right of return to their homes in pre-1948 Palestine, after destroying the State of Israel. Those Jews who aspire to liberate the Greater Land of Israel from its non-Jewish inhabitants would have to renounce that dream. Both peoples would have to admit the impossibility of ending the conflict by a military victory.

How rational and symmetrical! Each side renounces key beliefs, which then enables them to work out the logistics of friendly or at least non-belligerent co-existence. Why didn’t we think of that before? Probably because hardly anyone believes it possible. The mutual exclusivity of the narratives, the intensity of the accumulated grievances, the strength of the zealots on each side, all together push it beyond any chance of realization.

So that’s the end of the conversation? The tragedy continues its appalling course forever? And we all live and die miserably ever after? Is there any alternative to this horror show? Yes, there are peace treaties with Egypt and Jordan, imperfect but resilient, and now the Abraham Accords. Then again, there are also Iran and its proxies, the gradual fading of hopes for a two-state solution leading to a one-state nightmare, and the growing strength of Islamist fundamentalism in the Arab world and beyond.

There is no one “solution” to this complex tangle. But I have a suggestion, to help us defuse the tragedy, refute its inevitability and create alternatives: We must all, Palestinians and Israelis, resolve to stop being victims!

Victims obviously have the right to struggle for justice, but victimhood as a concept has been corrupted in our time. It has been manipulated in the service of diverse interests, its clarity and meaning often blurred. Claiming victimhood becomes desirable, as a magnet for sympathy and a focus of compensatory rewards. It is almost as if there is a formula which translates your level of suffering into a hierarchy of entitlement. The more victimhood you can demonstrate, the more reparations you can demand. This is all too easily exploited by partial victims, eager to benefit from the available rewards. Real human suffering is obscured, while competitive displays of victimhood proliferate. Victims are under pressure to assert and dramatize their victimhood so as to distinguish themselves from other victims vying for attention. Distinguishing more authentic and deserving victims from less becomes difficult.

Playing the role of victim impacts a person’s consciousness. Over time, victimhood can become a state of mind, an identity, an entrapment of the spirit. Breaking out of victimhood is not that simple. For both Palestinians and Israelis, it requires demolishing their basic myths by acknowledging difficult realities. Juxtaposing the realities that each must acknowledge may offer some useful perspective. Here, first, are some of the realities I believe the Palestinians need to confront:

1. The State of Israel is not going away. It is not a Crusader Kingdom or colonial outpost. It will not be conquered by military means. A majority of its population are the descendants of Jews from Arab countries, who were expelled after Israel’s creation and found refuge there.

2. The Palestine of 74 years ago no longer exists. It has been transformed beyond recognition.

3. The Palestinian strategies of liberation have failed. The armed resistance, terror, and intifadas have not changed the basic situation in the West Bank and Gaza. Neither have all the anti-Israel resolutions in international forums, nor the pro-Palestinian approval organized in western academic and media circles, nor the BDS movement.

4. The Palestinian people are deeply divided, disenfranchised, impoverished and exploited. The perpetuation of their refugee status has been disastrous for them. Officially, 1.5 million of them still live in refugee camps in Gaza, the West Bank, Jordan, Lebanon and Syria, in very poor conditions.

5. The great majority of Palestinians are not refugees. Those in Jordan and Israel have citizenship and relatively better circumstances. Those in Gaza, the West Bank, Lebanon and Syria live in worse circumstances.

6. Palestinian civil society has not yet developed democratic, accountable institutions of self-governance. Their current leaders stay in office by force and promote the suffocating myths which keep themselves in power and their people from pursuing full rehabilitation of their lives.

The leaders of the Palestinians and of the Arab states have found it expedient to extend victimhood as the primary Palestinian identity, deployed demonstratively as a standing indictment of Israel’s guilt and illegitimacy, and with little concern for its harmful effects on their people. They stigmatize rehabilitation as a deviation from their failed liberation strategy, and as a form of collaboration with the enemy. The Palestinians should reject this totally, reclaiming their lives and either integrating into the countries of their residence or building a vibrant, peaceful Palestinian society in the West Bank and Gaza, while preparing the institutions for eventual statehood.

Now, for the Jews. You might have thought that after creating the State of Israel, winning several wars, and developing a thriving industrial economy, their sense of victimhood would have abated. It has not. Here are some of the realities they need to recognize:

1. Israel is the strongest military power in the Middle East. Playing the victim of Arab aggression no longer elicits much sympathy even when Israel really is the victim, as in the Gaza missile attacks on Israeli civilian targets.

2. Israel can still justify a self-defense account of its policies, as long as these are clearly tied to security needs. It cannot simultaneously expect support for West Bank land expropriation and expulsion of Palestinians. The contradiction between the two is blatant, which makes the self-defense rationale look phony.

3. The Palestinians are not leaving, not in any foreseeable scenario.

4. The one-state solution, whether called the Greater Land of Israel or anything else, would undermine Israel’s existence as a democratic, Jewish state. Israel’s inability to expel the Palestinians does not earn “victim points”. Unsurprisingly, it earns “victimizer points”, and those who see it that way are not necessarily anti-Semites.

5. The Holocaust is over. It no longer provides cover for all Israeli actions nor wins compassion from non-Jews. It hasn’t for a long time. The image of the persecuted Jew has faded from the world’s awareness and been replaced by the powerful Israeli soldier. The Holocaust and antisemitism are trivialized when constantly invoked against Israel’s critics.

6. Ancient Israel, through the era of the Maccabees, does not provide very successful models of Jewish statehood and should not be idealized. It was always a smallish regional power trying desperately to navigate the great power rivalries of its time, and often making catastrophic mistakes. The last of these, vis-à-vis Rome, resulted in conquest, destruction and exile. The breakdown of social-ethical standards, as condemned by the Hebrew prophets, and extreme internal divisions, accelerated this process. The great challenge of modern Israel is to learn and apply the lessons of that historical experience, if its people can ever agree on what they are.

Both Jews and Palestinians have serious work to do, realities they need to accept, and myths they need to discard. The motivation for doing so is sheer survival, because their weight is dragging both peoples ever closer to an apocalypse. The Jews have a head-start over the Palestinians, in that they have jettisoned at least some of their painful legacy of suffering by creating Israel. The extent to which they are still haunted by their victimized origins is a warning, and an indication of how far along the road to real liberation they still have to travel. This recalls the Biblical story of the Exodus from Egyptian slavery. The first generation of freed slaves proved deeply flawed and incapable of entering the Promised Land, a destiny they had to delegate the next, free-born generation to fulfill. Liberating a national mind-set takes work, and time.

If anyone can relate to the Palestinians’ connection to the Land, it is the Jews. The national anthem of Israel, “HaTikva” (The Hope), speaks precisely of their 2000-year-old attachment to the ancestral home. Tragically, both people are referring to the same tiny land, and have been thrust into conflict over its control. The essential truth is that neither of them can have it all. Their only real hope is to figure out how to share it.

In 19th-century eastern Europe, the Jews faced unlivable conditions, and came up with numerous competing responses, including emigration to the New World, assimilation to their societies of residence (where permitted), Zionism, Bundism, communism, and others. They all had in common a rejection of the victimized Jewish status quo and a resolve to take action to change it, and to shape alternatives. I wish that the Palestinians would recognize their embrace of victimhood as a false path to redemption. Whatever benefits it has provided them are short-term and illusory. Building positive alternatives to their present, not eradicating Israel, is the surest road to their future.

Having been thrown together in conflict, the Jews and the Palestinians have inter-linked destinies. The extremists of both sides were always necessary to one another for confirmation of their worst fears. Both sides can also help one another to reach liberation by debunking old myths and creating new realities. The first-time participation of an Arab party – “Ra’am”, led by Mansour Abbas – in the current Israel Government, and his recent explicit recognition of Israel’s right to be a Jewish state, may be milestones along the way.

We are not fatalists, helplessly stuck in an escape-proof tragedy, no matter what any demagogues or fanatics may say. Jews and Palestinians can challenge and overcome their respective myths. The visionaries of both sides can gradually confirm each other’s best hopes, construct mutual trust, and thereby provide the opening we all need so much.

About the Author
Born and raised in Montreal, Canada, studied at McGill, U. of California, Berkeley, and the London School of Economics, resident in Israel since 1976, former director of the WUJS Institute (Arad) and of the Israel-Diaspora Institute (Tel Aviv U.), involved in the Israeli plastics industry (former vice-president of ZAG Ltd.), now living in Ra'anana.
Related Topics
Related Posts
Comments