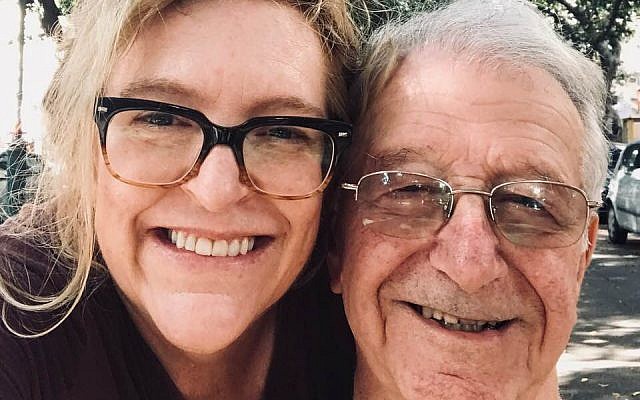 Nobody really tells you the inglorious, whumping finality with which a zip line ride ends. Put your legs down at the end, they said, as they shoved me into the abyss. There was a green and brown blur – maybe trees or rocks, I don’t remember, some spinning and someone was screaming and then – whump – it was over.

My life partner, Gidon, greeted me on the other end, his white hair whipped up into a crazy Einstein look. He had gone first. Now, on the other end of the 600-meter zipline, he was grinning from ear to ear. It was Gidon’s 85th birthday. We were at the Deer Land Farm not far from Jerusalem. My terror and Gidon’s thrill lasted only 36 seconds.

Before we went, Gidon didn’t really know what a zip line was. He figured it was a cable or trolley car kind of set up until they put him in his harness, and he realized there was no actual conveyance involved. He was utterly unperturbed by the deep ravine in front of him.  Put your legs down at the end, they said, then shoved Gidon out and over the canyon. His laugh echoed as he ziplined 600 meters away at 60 miles per hour.

Later, at our well-deserved post-zipline lunch at the Gush Etzion Winery, Avi, our server, told us that we probably should have gone wine tasting before the zip line. Now that’s a pro tip if I’ve ever heard one. The restaurant was wonderful, and they brought Gidon a tiny apple pie with a sparkler in it.

On our way back home to Ramat Gan, I drove so that Gidon could field the many phone calls he had been receiving all day from his six children and many friends. That’s extreme, abba-leh! Gidon’s third son, Elisha, said when Gidon described his death-defying day.

That evening, Gidon was a bit pooped, and to be honest, so was I. Being terrified for 36 seconds is exhausting. Gidon settled into his usual spot on the sofa and turned on the news. I retired to my salon, where I attacked yet another knitting project. From the television, though, I could hear one refrain over and over – corona virus, corona virus, corona virus.

I’m generally not one to become frightened of things like seasonal viruses but this one has me on edge. I have supplied Gidon with two small bottles of hand sanitizer and several packets of Dr. Fisher alcohol wipes, all of which he uses, dutifully, and I do too. I have demonstrated for him how to properly wash our hands for 20 seconds while singing or humming the tune of our choice.

Desperately, I cling to how much I love this man and how devastating it would be – it will be – to lose him. Time is not on my side. Gidon is 85, and he is vulnerable. I realize with helpless humility that other than taking precautions, there’s not a lot I can do to make sure Gidon does not catch this virus. We have worked so hard for the last two and a half years, writing a book about Gidon’s life. I want him to live to see the fruits of it, even if that just means nice comments from people. He deserves this.

Gidon has, so far, survived many other viruses, cancer, and even the Holocaust. Of the 15,000 children imprisoned in the Theresienstadt concentration camp near Prague, only 92 survived. Gidon is one of those children. Maybe it makes sense, then, that Gidon is not scared of much. Still, my anxiety rises. I’ll be darned if I’m going to let this virus get him. I feel a responsibility that I could never have imagined. What if I get sick and then pass it onto him?

Gidon has not studied spirituality or “feel good” books or philosophies the way I have, so tirelessly, in my search for relief from anxiety, comfort, meaning, and maybe even a helpful aha-moment or short cut. Gidon doesn’t have any books by Jack Kornfeld or Tibetan Buddhist nun Pema Chödrön on his bookshelves the way I do. He hasn’t read Eckhardt Tolle or listened to the inspiring Ted Talk of Brené Brown. Gidon doesn’t overthink. He just lives. He considers life a great gift without ascribing to any belief of a pop theory, cosmic sensibilities, or wishful thinking. He’s just happy to wake up every morning, whether it’s an ordinary day or a day in which we take part in an extreme sport. It’s that simple. Because of Gidon, I am reminded that life is fleeting, and that real love is rare and that every moment spent living fully – the ups and the downs – is a moment well spent.

That evening, as Gidon rested and the television droned about statistics and viruses, I posted some pictures on Facebook of Gidon and me on the zipline. “You two make me so happy!” someone commented. Whump – it hit me – an aha moment – live in the now, and if that brings you joy and even inspires others? That’s the way to go.