The Blogs
Andres Spokoiny
President & CEO, Jewish Funders Network
Apply for a Blog
Please note that the posts on The Blogs are contributed by third parties. The opinions, facts and any media content in them are presented solely by the authors, and neither The Times of Israel nor its partners assume any responsibility for them. Please contact us in case of abuse. In case of abuse,
Report this post.

In 1972, during Richard Nixon’s visit to China, Premier Zhou Enlai was asked what he thought about the French Revolution. He responded, “Too early to tell”. His answer is celebrated to this day as an illustration of the supposed Chinese ability—and the Western need—to take the long view of history.

In fact, Enlai wasn’t really being so philosophical; he had simply misunderstood the question. He thought he was being asked about the French student revolts of 1968, the effects of which were still reverberating in capitals across Europe.

But don’t worry; Jews never needed Zhou Enlai to take the long view of history. For our people, ancient history is still playing out; it molds our values, and it affects our understanding of the modern world. History and present are two inseparable parts of one long adventure whose denouement we are still expecting.

This seamless flow of Jewish history was much in my mind this week, because Enlai’s unintentional warning against haste in judgment is particularly relevant when it comes to Chanukkah. Beyond the candles, the dreidels, and the artery-clogging foods, Chanukkah brings us a complicated and contradictory story that defies easy evaluation.

I grew up believing that Chanukkah told an epic story of freedom. I believed, together with Howard Fast, that it was “the first modern fight for freedom”. For me, the Maccabees were romantic and idealistic warriors, wise democratic leaders willing to give their lives for tolerance and for the right of all people to worship and live as they chose. I imagined the Maccabees as an improbable combination of Che Guevara, John F. Kennedy, and Abraham Joshua Heschel.

And Chanukkah was indeed all that. The Maccabees were the original “band of brothers” who defied insurmountable odds and challenged a mighty empire to reclaim their right to be different, to live independently as masters of their own destinies. They sought Jewish rule for nobody but the Jews; they didn’t want to impose their ways on anybody else. They only wanted peace and respect for all. It’s an inspiring, ever-relevant tale, and it fills me with pride that it was my people who first fought for these values.

But, as I later learned, this is only one face of the Chanukkah story. Viewed from another angle, Chanukkah is an ugly story of zealotry, civil war, abuse of power, and eventual ruin.

The Maccabees weren’t only fighting the Seleucid army—they were fighting other Jews, namely the mityavnim, those Jews who had adopted the Greek language and Hellenistic customs. In other words, the Maccabees declared war on the “assimilated.” Jews who didn’t conform to their interpretation of Judaism were put to the sword or had to seek refuge in the Diaspora. In an all too common reversal, those who fought intolerance became intolerant themselves.

It gets worse. Simon Maccabee, the last surviving brother of the original band and the first ruler of independent Judea, tried to stay true to the original Maccabean values. He didn’t proclaim himself king, but high priest and nasi (a Hebrew term meaning ”ethnarch” or “leader,” the same word used in Modern Hebrew for “president”), and he was elected in a democratic fashion. But things went downward from there. Simon was murdered by fellow Jews, and his descendants showed fewer scruples. Violating the “Davidic principle” (that only descendants of King David can be kings of Israel), they took the crown for themselves. Assuming full kingship while retaining the high priesthood, the power-hungry Hasmoneans violated a paramount idea of Judaism: the separation between royal and religious power. All the while, recurrent civil wars cost tens of thousands of Jewish lives.

John Hyrcanus, Simon’s son, did something else that is anathema to Judaism: after his battles with the Idumeans, he forced the conversion of the entire population. Not exactly a way to honor the ideals of tolerance and freedom of his father… But then, that was hardly the only departure the Hasomneans made from the ways of their ancestors. Indeed, while one of the first purposes of the Maccabees had been to fight the “Hellenized” Jews, the Hasmonean kings had no qualms about adopting the nice accoutrements of Hellenistic life for themselves. Even their regal title changed to basileus, the Greek designation. (This hypocrisy reminds me of some of today’s Jewish American leaders who claim that criticizing Israel is beyond the pale, but who vociferously and publicly attacked Yitzhak Rabin during the Oslo Peace process).

The Hasmonean misadventure ended, as it only could, in farce and tragedy. John Hyrcanus’s grandchildren, Aristobolous II and Hyrcanus II, engaged in yet another vicious civil war and both had the brilliant idea of inviting Rome to intercede in their favor. You can imagine what came next: the beginning of the end of Jewish independence for two thousand years.

Looking at the state of the Jewish people today, there is in us much of the light of the Maccabees and, sadly, much of the darkness of the Hasmoneans. If you ask me which I think will prevail—which will be the ultimate heritage we derive from the Chanukkah story—I have to agree with Zhou Enlai: two thousand years later is too early to tell.

During the last few months we have heard dangerous echoes of the Hasmoneans: zealotry and internecine hatred running wild, poisonous cocktails of religion and power politics, and, as in John Hyrcanus’s time, abandonment of our most basic values. We must ask: are we living the Maccabean dream, or the Hasmonean nightmare? How can we celebrate Chanukkah once we know how the story really ends?

And yet, the story hasn’t ended even now. Now more than ever, in these times of violence and hatred, of intolerance and radicalism, we need to rescue the original light of the Maccabees that illuminated a vision of peace and respect; the light that expelled darkness and tyranny, and made freedom and tolerance a sacred imperative. Peoples, like stars, are entitled to a momentary eclipse in which light fades away. That is tolerable if we bring the light back, if we don’t let the eclipse lengthen into endless night.

As funders we have a major role to play, for every grant, every project, every act of kindness can be an opportunity for healing a broken word and reconciling a split community. We can—we must—be the light that shines through the cracks of our imperfect reality.

This year, as we celebrate the courage and the miracles of yesteryear, let us commit to building a world in which light outweighs darkness and hope vanquishes despair. Let us face violence with the conviction that—as the Maccabees taught us—right can triumph over might, and even when we walk through the dark valley of intolerance, let us celebrate every ray of the light we give to others.

Yes, it’s too early to tell. It always will be, because the battle between light and darkness is not an event but an ever-unfolding process. The Chanukkah story is still being written today, and what makes it frightening—and beautiful—is that the ending depends on us. 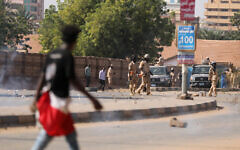