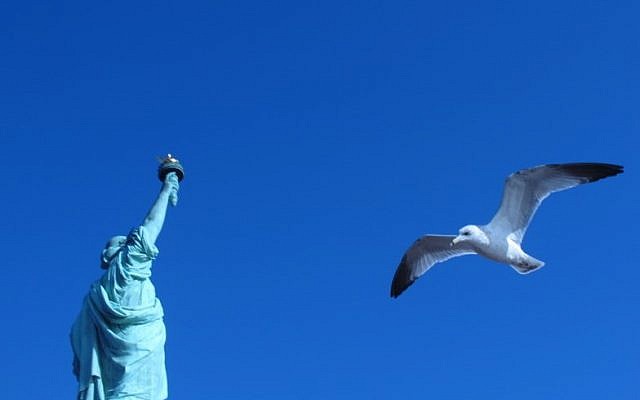 Well into young adulthood in the United States I could find no quibble with the idea that we lived in the best place on Earth. America had saved my family from Nazis and communists and furnished me with top degrees and reasonably straight teeth. My friends and I were happy as clams to be working hard and partying harder in Ronald Reagan’s so-called “shining city upon a hill.”

It seems a little quaint to reflect on this today.

The problems go beyond the foulness of America’s politics to encompass an amazing range of problems that are as bizarre as the Imperial measuring system that it still insists on using and which few can truly understand. Where else might the national government “shut down” because of a dispute over border arrangements, as is now the case? (And where else would everyday state services even be called “the government,” at once both elevating and somehow discrediting them?)

The place remains exceptional, of course, boasting incredible wealth, technological edge, and breathtaking power soft and hard. A nation made from many, it acts on principle more than most. But for all the triumphalism about “exceptionalism,” something structural is definitely wrong.

“The notion of American exceptionalism is about possibility — not that we’re better than anyone else but that we are a launching pad for better, a sort of incubator for humanity’s best,” says a journalist friend of mine who works for a major U.S. organization and as such is prohibited from saying anything interesting on the record. “But that has faded, too.”

Since admitting is the first step to recovery, and with the Democrats now controlling the House and 2020 right around the corner, I offer some proposals to Make America Great:

American politicians act like ensuring a baseline of health services amounts to communism. Politicians warn of “death panels” and endless waits and call it “single-payer,” bestowing a bureaucratic and costly affect. Medicine’s great in the U.S. at the top, and emergency rooms may still treat you for free, but millions lack reasonable health care (more now than before, thanks to Trump) and it’s unnecessarily tied to employment. I’ve lived in the UK and in Israel, which have versions of single-payer, and people love them. I’ve known people who underwent MRIs and CTs quickly and for free; in America you’d pay a fortune and then often wrangle with insurers whose business is to avoid reimbursing. Obamacare actually deepened this backward model for fear of the sky falling in if true National Health Service were proposed.  I understand there are complications in America with abusive litigiousness causing doctors’ insurance expenses to skyrocket. But a healthier society is a wealthier society. Can the nation that gave us Apple not just figure it out?

The UK and Australia, which severely restrict guns, have an annual murder rate of around 1:100,000, five times less horrible than in America. Any attempted change is flattened by the National Rifle Association, which represents a small minority that wields big power by voting as a single-issue bloc. The caliber of their talking points hovers around “if guns were banned only criminals would still have them.” Really? Slap life in prison on criminals caught with unlicensed weapons. And stop overthinking the Second Amendment to the U.S. Constitution. It says that “a well-regulated militia (is) necessary to the security of a free state” and it was written in an era of muskets. For this we must limit the discussion to “waiting periods” for providing assault rifles to any nut who so desires?

COLLEGE SHOULD NOT BANKRUPT YOU

College in most places in the West will not saddle the graduate with years of crushing debt. The University of Pennsylvania in the 1980s cost my parents $10,000/year. Today the figure is over five times higher, leaving the overall cost of living increase in the dust. Average net household income is barely higher than typical private university tuition; even state schools cost over $26,000 for out-of-staters. The in-state average of $10,000 in-state is three times higher than in otherwise-more-expensive Israel. There are some individual initiatives that are laudable, like NYU’s recent decision to make medical school tuition-free. But what would it take for a systemic effort to make college free at least at all the non-elite schools that are a true national treasure? There are 16 million students in the country – so, the Ivy League minority aside, in a maximal case it could be about $160 billion. That’s 4% of the budget. The U.S. spends over $700 billion annually for defense and last year increased the military budget by over $80 billion. That went through with barely a peep, but when Bernie Sanders proposed free college you might have thought he wanted to install Ho Chi Minh in the White House.

CARING ABOUT INEQUALITY IS NOT COMMUNISM

The reason the military increase sparked barely a peep was that attention was drawn to the attendant Republican tax decreases which disproportionately benefitted the already wealthy. This, in the country that already leads the developed world in inequality of income and wealth distribution, which  has steadily grown more imbalanced over the past four decades, driving increasing numbers of people crazy with jealousy and bitterness. That is precisely the opposite of the path one would reasonably expect, of decreasing the poisonous inequality. But many Americans object to the principle of redistribution, arguing that liberty includes the freedom to fail. To them I say that almost every developed nation has progressive taxation, meaning higher incomes trigger higher marginal rates, and that is already redistribution, which even the Republicans do not generally oppose. Who could deny that for 1% of the people to own 100% of the things would be bad? Assuming we can agree on that, the redistribution discussion is not over principle but degree. According to most studies the top 400 richest Americans have more wealth than the entire bottom half, and the top 1% has almost half the country’s wealth. Is that the right degree? The market left to its own devices does not work everything out. It can create slavery. It won’t give every child education. For some things one needs intervention. Those things make the difference between a market and a civilization.

How can the Republicans ever win when they deepen already crazy inequality making so many are angry? Part of the answer lies in a huge American scam: the party in control can redraw jurisdictions in crazy ways to guarantee itself based on voting patterns more districts than it would win fairly. While the Republicans did not invent gerrymandering they are its expert practitioners today, such that in many places the Democrats need to win by huge margins to even achieve parity of representation. There are legal efforts now to reverse this disgrace, and my home state of Pennsylvania is a beacon. But the prospect grows more remote as Trump stacks the court system with sympathetic judges, as we shall see in the next section. In what universe is this reasonable?

In the United States, a solid majority of state court judges face elections. Most states also elect sheriffs, which are the top law enforcement officials in some types of jurisdictions. This is very unusual among orderly nations. And it puts the United States in an awkward position when lecturing to others about proper rule of law and the evils of a tyranny of the majority. In Israel disruptive elements rightfully catch heat for politicizing even modestly the selection of  supreme court judges. Meanwhile in America even unelected federal judges are appointed with politics in mind. The most recent U.S. Supreme Court nominee, beset by charges of sexual assault, railed hysterically against “the Clintons” in his hearings.

How to justify a system where voters have unequal representation? It is a system where the chasm between town and country has handed the Republicans an advantage so great that even though they have won the most votes only once since 1988 they have taken the White House thrice. Yes, the Electoral College means candidates must pay attention to the hinterlands — but can that justify this farce? Would anyone agree that a vote in Sicily be worth 4 in Milan? That is what is happening with Wyoming versus California. The framers of the Constitution had valid ideas but were not gods, and in these divided times their document is near-unamendable because of the majorities required.

My proposal is to start with a baby step by extending the presidential vote to Puerto Rico, where 3 million U.S. citizens have been disenfranchised for a century (and rather badly treated of late). The Republicans would gain some needed credibility with Hispanics, and as the place (my home 20 years ago) is reliably Democratic the move would yield an ounce of balance. Which to the rest of the world, including England, is about 28 grams.