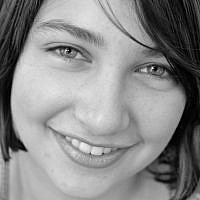 The Blogs
Eden Farber
Apply for a Blog
Advertisement
Please note that the posts on The Blogs are contributed by third parties. The opinions, facts and any media content in them are presented solely by the authors, and neither The Times of Israel nor its partners assume any responsibility for them. Please contact us in case of abuse. In case of abuse,
Report this post.

If you carry around a file folder that contains all of your important paperwork – original copies of every document in existence that proves you are who you say you are – it is probably best not to run through sprinklers while holding it. Twice.

This is my aliya story.

I’m going to begin at the end (which is really the present, because nothing has “ended” yet). Halfway through my second week living on a beautiful kibbutz up north, in an intensive fifteen hours a day study program – and I’ve spent almost no time here. Every new day has brought a new office meeting; some paper was missing, some signature was needed, some account to be opened. Whether running through sprinklers so as not to miss the last bus or waiting two hours for it to come, I may have been traveling across the country, but I was not exactly traveling for pleasure. Attempting to navigate the bureaucratic system and become a fully functioning citizen took me in many seemingly senseless circles.

The scariest part of this balagan was doing the entire thing alone. My parents were not there to drop me off and wish me luck; my friends didn’t take me out for ice cream after a long stressful day. This was not due to their negligence, of course. I was conscious that this would be my reality – how could I not have been – when at 17 I made aliya alone.

However, alone turns out to be an entirely incorrect term for my experiences.

During my two-week long mission to sign up for health insurance, after being sent from place to place in the city of Beit She’an, wishing there was someone I could trust that could help me do this ostensibly simple task, I asked the security guard outside the post office if he knew where I needed to go. He nodded along as I explained my problem in broken Hebrew, and then went into the office, took my number, and went to the front desk to talk to the woman for me. Then he wrote out the steps of where exactly I needed to go and what the hours were.

A day or two later, in the same city, I asked a clerk outside how to get to the bus stop to Afula. Overhearing me from the sidewalk, a woman pushing her children in a double stroller, with groceries hanging off the handles, said: “I’ll take you.” Without a second glance, she walked me to my bus stop, and then turned around to go back and continue her errands. On our way, I heard someone shout out to me – the security guard from the day before recognized me, and wanted to know how I was doing. As difficult as it was for my pride to accept all these acts of kindnesses at once, I felt overwhelmingly appreciative for these people and their small but significant investments in me.

I’m proud to report, though, that these interactions were not rarities. Throughout my time here, every person – from government officials to taxi drivers to kibbutz neighbors to teachers and mentors – treated me patiently and welcomingly. Every Israeli that I told I had just moved here responded with a genuine, warm smile, and in my first few days my phone was flooded with calls and messages from distant family and old friends welcoming me to their homes and into their lives. I was overwhelmed with the feeling of belonging – not of the more traditional sense of belonging through speaking the language and knowing the culture, though. Rather, it was like walking into a person’s home that you’ve never met before, being told to take off your shoes and given a hot drink, and hearing the simple but significant phrase “Make yourself at home.”

Fade back to my life in America. As proud as everyone around me was that I was “moving forward,” and “making aliya,” (as a mitzvah and a Zionistic concept) it was always peppered with a certain kind of doubt or suspicion. I was not taking the usual path – finishing high school with a formal degree, moving to college towards a substantial career, etc. – instead I was following the dreams that I made up when I was nine years old. The path less travelled was always less travelled for a reason. I would be lying if I said it was easy, that I never questioned myself, that I fit into the culture easily, that I never doubted my right to be here, or even that I never looked back; but I would also be lying if I said with all of that, it wasn’t absolutely worth it to be here.

From the moment I stepped off the plane and suddenly had to jump through bureaucratic hoops to get around, I realized that as foreign as moving to a foreign country is, the culture of unconditional hospitality was a thing that I had never truly interacted with. And I loved it.

My aliya story is not one of a Jew finding her home in Israel easily and simply, nor is it the story of a hero and soldier-to-be who followed her dreams without ever doubting herself. It’s not a story of a perfect Jewish state or of a perfect Zionist dream come true. It’s a story of trials and tribulations, overwhelming feelings of both comfort and loneliness – and the power of being in a culture that values caring about others as if they were family, in ideology or in practice. It’s a story of a person following their gut to do what they know they must; it’s a story of strangers being overwhelmingly kind to strangers, not simply because we’re all one big Jewish family, but because a society that preaches valuing others acts like it. It’s a story of growing up and making tough decisions – and while aliya is often treated as the universally correct one, I think it’s important to acknowledge that every big decision and step in one’s ideaological identity should be valued and honored as much as the next one.

I will share with you one last tale: I was buying adapters to plug in my laptop, and trying to explain to the shopkeeper that I wanted America to Israel, not vice versa. “Why do you need that?” he asked impatiently in Hebrew. “I just moved here from America, and I don’t have any,” I responded likewise. Suddenly, his eyes lit up. “You moved here? Alone? Wow!” he continued to help me find everything I needed, and as I continued to speak to him in Hebrew he tried to use as much English as he could muster up. He helped me find the right money to pay with patiently, and as I was leaving he looked me in the eyes, smiled, and said in his thick Israeli accent, “Have a good luck, lady.”

Because sometimes, all you need is the one.

About the Author
Eden Farber is serving in the Israeli Air Force. She moved to Israel from Atlanta, GA, where she homeschooled. She has published writing with The Torch blog, Fresh Ink for Teens (section of the NY Jewish Week), the F Bomb blog and the JOFA journal.
Related Topics
Related Posts
Comments