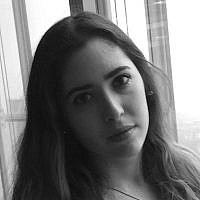 The Blogs
Kelly Leibovich
Apply for a Blog
Advertisement
Please note that the posts on The Blogs are contributed by third parties. The opinions, facts and any media content in them are presented solely by the authors, and neither The Times of Israel nor its partners assume any responsibility for them. Please contact us in case of abuse. In case of abuse,
Report this post. 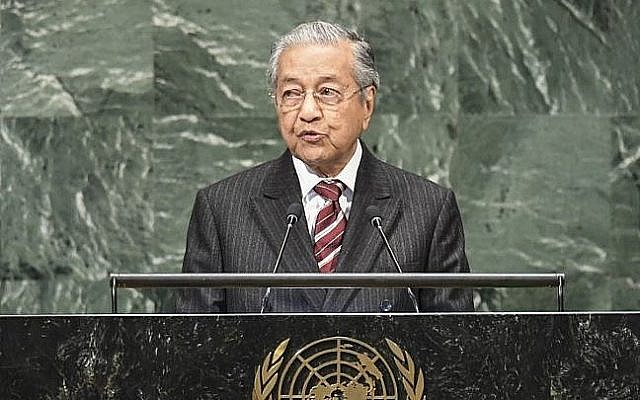 Malaysia's Prime Minister Mahathir bin Mohamad speaks during the General Debate of the 73rd session of the General Assembly at the United Nations in New York on September 28, 2018. (KENA BETANCUR / AFP)

Malaysian Prime Minister Mahathir Mohamad has gained recent controversy for his comments describing Jewish people as ‘hooked nose’. Mohamad’s antisemitic rhetoric escalated to Holocaust denial and derogatory comments towards Israel, collectively denying the number of Holocaust victims and blaming the Jewish state for instability in the Middle East.  As diplomatic relations between Malaysia and Israel are non-existent, Prime Minister Mohamad prohibited Israeli citizens from visiting Malaysia.  This declaration came when Israeli paraplegic athletes were banned from participating in International Swimming Championship which was meant to be hosted by Malaysia in 2019.

The Israeli government retorted to Mohamad’s comments by describing them as ‘shameful’ and ‘antisemitic’.  The UK government equally condemned Malaysia, calling the ban on athletes a ‘fundamentally wrong’ move.

The Paralympic Committee finally responded by stripping Malaysia of hosting the World Para Swimming Championship 2019 because of political exclusion towards Israel.  Andrew Parsons, the IPC president, said: ‘All World Championships must be open to all eligible athletes and nations to compete safely and free from discrimination’.

With Mohamad’s self-proclaimed gladness ‘to be labelled antisemitic’, it is surprising that the Malaysian prime minister was invited to speak at the Oxford Union.  At his talk on the 18th January, Mohamad described the Israeli government as ‘very powerful’ and argued that since Malaysia has no diplomatic ties to Israel, Malaysia is allowed to control who enters its borders.

Mohamad did not stop there.  He argued he had the right to speak collectively ‘against the Jews’. Defending his defamation of Israel, Mohamad upheld his right to criticise both Israel and Jews alike. He said he should be allowed to conflate the two concepts – Jew and Israeli – because this is how the Israeli government portrays itself.  Whilst simultaneously criticising Jews and Israel, he denies being an anti-Semite.

Over the last few days, we have contacted the President of the Oxford Union with concerns regarding several speakers that have appeared in this term’s calendar of events, who are well known for publicly expressing antisemitic views. Included in this list is Malaysian Prime Minister Mahathir Mohamad, who will speak on Friday evening.

Prime Minister Mohamad is an open and unrepentant antisemite, accusing Jews of ‘Nazi cruelty’ and seeking to wipe out all Muslims, has said ‘Antisemitic’ is ‘an invented term to prevent criticizing Jews for doing wrong’, as well as indulging in Holocaust denial. Given an opportunity to reframe his comments on a recent edition of BBC’s ‘Hardtalk’, he instead chose to refer to Jews as ‘hook-nosed’.

This isn’t the first time that the Oxford Jewish Society has reached out to the Union or made a public statement with concerns about the antisemitic views of the speakers on their termcards. In previous instances, Union Presidents have responded to our concerns by saying that they weren’t aware of the speakers’ discriminatory opinions, or have ignored our communication with them.

However, in response to the worries we have now raised about the forthcoming speakers, the President of the Union has offered to hear the Jewish Society’s suggestions on ways the Union can improve their safeguarding of Jewish members. We are taking the Oxford Union up on this new offer, and hope to meet with them soon. We look forward to addressing our concerns with the Union, and making the university a safer place for all minority students.

We are here to support any Jewish students who feel threatened or unsafe on campus. If you have any questions or worries, please feel free to get in touch.

The Union of Jewish Students (UJS) has expressed their support to the Oxford Jewish Society in light of the event, suggesting that universities need to take into account the concerns and conversations that can be had with Jewish students.

Guest speakers expressing anti-Semitic views across campuses has been steadily on the rise. With the growth of global anti-Semitism, we should question what universities can do to create a constructive but safe environment for Jewish students to participate in.  Through inviting speakers that perpetuate anti-semitic rhetoric, universities are not only enabling hatred on a campus level but rather normalizing and standardizing anti-Semitism into civil society.

Indeed, anti-semitism is on the rise within the United Kingdom.  Hate crimes towards Jewish citizens has increased and one in 20 Britons deny the existence of the Holocaust.  The political spectrum of the United Kingdom also reflects this reality, with the Labor party’s massive anti-Semitic scandal paving way to inspire more hatred and targeted attacks towards Jewish citizens.

What can universities do to better protect its Jewish students? For one, universities need to understand that the conversations held regarding its Jewish members are not exclusive to the private sphere of campus or education.  Rather, campuses inspire dialogue that goes beyond academic fields and assorts itself to societal values and morals. It is therefore important that universities reflect on how speakers such as Prime Minister Mahathir Mohamad promote a message of intolerance which attributes hatred and division rather then sincere dialogue and engagement.  Universities, alongside their student unions, need to acknowledge their role in endorsing speakers or academic principles which lead to widespread anti-semitism.