The late Nelson Mandela has an honored place in the pantheon of world acclaimed celebrities and we can all learn much from his legacy. After serving 27 years in jail this remarkable man was able to negotiate seriously and in good faith with then president de Klerk and he is universally admired for his ability to bury, but not forget, the bitterness of the past and actively work for a better future for all . 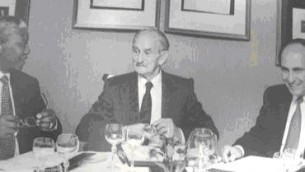 In his well written blog “Madiba we need you” Jonathan Zausmer wrote that a meeting will be held in Tel Aviv on July 10 to discuss the late Mandela, the man, the peace process in South Africa and its relevance to Israel. Zausmer spoke of each of us being part of a butterfly effect to a greater and peaceful future.

Mandela’s attitude to Israel has indeed been a subject of much confused discussion and it is frightening to realize how propaganda can lead to widespread belief in false allegations. This is nowhere better demonstrated than by the fake letter circulated on the internet that led many to believe erroneously that Mandela regarded Israel as an apartheid state even though he never made that accusation. Former president Jimmy Carter eagerly quoted from it during a speech at Brandeis University and the BDS movement has used it enthusiastically

The lie originates in a 2007 fake memo that is still circulating on the internet that was purportedly signed “Nelson Mandela” and addressed to New York Times journalist Thomas Friedman but actually written by Arjan El Fassed, co-founder of the virulently anti-Israel blog, The Electronic Intifada.

El Fassed has since claimed he had no intention of misleading as he was merely copying the style of Friedman’s mock letters. But the important difference is that in Friedman’s mock letters he made the true origin absolutely clear as in his 2001 NY Times piece “Foreign Affairs; Powell’s First Memo” which he opened by stating

“Wouldn’t it be interesting if Secretary of State Colin Powell sent the following memo to President Bush?”

This is very different than El Fassed’s letter which, although stating his byline, has no similar clarification and gave all readers, including President Carter, the impression that it was written by Mandela himself. This is how it opened:

Despite El-Fassed’s subsequent explanation, this infamous hoax letter continues to be used among the countless other spurious allegations against Israel. Last June it was quoted in all seriousness at the 2014 general assembly of the Presbyterian Church of the USA in support of a resolution, which passed by a vote of 310 to 303, to divest from Caterpillar, Hewlett-Packard and Motorola Solutions because they supply equipment used by Israel in the occupation of Palestinian territory.

So what was Mandela’s attitude to Israel and the Jews? He always strove to maintain a balance and though he strongly supported the Palestinian struggle for independence he stressed that this could only be attained through all parties recognizing Israel’s legitimate right to exist within secure borders.

Mandela had an early acquaintance with Jews. In his autobiography ‘Long Walk To Freedom’ Mandela writes of his first job during the apartheid era as an articled clerk in a law firm which he describes as

“more liberal than most. It was a Jewish firm, and in my experience I have found Jews to be more broad-minded than most whites on issues of race and politics, perhaps because they themselves have historically been victims of prejudice. The fact that Lazer Sidelsky, one of the firm’s partners, would take on a young African as an articled clerk – something almost unheard of in those days – was evidence of that liberalism.”

In this book, Mandela makes specific mention of Arthur Goldreich`s experience with the Palmach, the military wing of the Jewish National Movement in Palestine and his knowledge of guerilla warfare. Mandela acknowledges that Goldreich filled in the many gaps in his understanding. He relates that the only airline willing to fly his friend, Walter Sisulu, to Europe without a passport was Israel’s own El Al. These aspects of the Israeli contribution are too often overlooked or just ignored

Lazer Sidelsky’s sons Barry (Dov) and Colin have documented the relationship between Mandela and their late father in a fascinating book “Mandela’s boss” and it is regrettable that Dov, who lives in Israel and who has many personal anecdotes to relate, won’t appear on the panel at the forthcoming discussion on Mandela.

When Lazer Sidelsky visited him in prison, he was introduced by Mandela to his warder as:

“The only white man I will ever call Boss.”

A year after Mandela became president, he gave a signed copy of his book to “my former boss Laz,” calling him “a man who trained me to serve our country.”

Walter Sisulu who was jailed with Mandela in Robben Island, remarked that had Sidelsky not given Mandela the job, he would have gone back to the Transkei to become a paramount chief at best.

In his address to the 1993 Congress of the South African Jewish Board of Deputies, Mandela said South Africans of Jewish descent have historically been disproportionately represented among our White compatriots in the liberation struggle and he named many examples. He added that many black South Africans are indebted to Jewish philanthropists who assisted them when opportunities in education, the professions and business were largely closed to them because of racist laws and practices

With regard to the Palestinians he said

Regrettably it appears that President Mandela was influenced by disproportionate claims in world media about Israeli cooperation with the previous South African government which ignored the real huge and vital contribution made by European, American and Arab countries in supporting that ugly regime. In a short paragraph during his address he said that the ANC, in common with the international community, was extremely unhappy about the military cooperation between Israel and the apartheid regime adding however, that the late Oliver Tambo, had urged

“as South Africans we should avoid being drawn into conflicts and tensions arising from the agendas of others beyond our shores”.

And during his visit to Israel in 1999 Mandela referred to what he considered Israel’s cooperation with the apartheid regime but he deliberately added that Israel did not participate in any of the regime’s atrocities.

However, if a truly objective and unbiased investigation were to be conducted of countries, which supported and cooperated with the apartheid government, Israel would hardly earn mention as detailed in the following articles
https://blogs.timesofisrael.com/the-facts-about-israel-and-the-south-african-apartheid-regime/
and here
https://blogs.timesofisrael.com/the-israel-south-africa-nuclear-arms-story/

Moreover, Israel’s positive contribution in covertly training Black leaders during the apartheid period by organizations such as Mashav would earn wide recognition as described here https://blogs.timesofisrael.com/counterproductive-politics/

With regard to the current fixation on Israel’s “occupation” of land as being the source of all the Middle East’s problems, Mandela was unequivocal and it is timely to recall his statement which pithily summarizes his legacy with regard to the Arab-Israel dispute (The Independent 19th October 1999): Mandela ‘understood’ why Israel would continue to occupy land as long as Arab states remained at war with Israel. ‘I cannot conceive of Israel withdrawing if Arab states do not recognize Israel, within secure borders,’ he said. The “blame Israel” noise is notably absent from Mandel’a legacy.

About the Author
Maurice Ostroff is a founder member of the international Coalition of Hasbara Volunteers, better known by its acronym CoHaV, (star in Hebrew), a world-wide umbrella organization of volunteers active in combating anti-Israel media and political bias and in promoting the positive side of Israel His web site is at www.maurice-ostroff.org
Comments