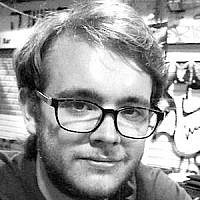 The Blogs
Ben Bernstein
Apply for a Blog
Advertisement
Please note that the posts on The Blogs are contributed by third parties. The opinions, facts and any media content in them are presented solely by the authors, and neither The Times of Israel nor its partners assume any responsibility for them. Please contact us in case of abuse. In case of abuse,
Report this post.

Once upon a Shabbos, three students from the Pardes Institute of Jewish Studies were sitting on the porch of a guesthouse in Tzfat, sipping Macallan as the sun set over the rolling hills. As their minds melted into the majestic view, a gentleman dressed in traditional Chassidic garb called out to them from the street above, asking the students to let them into the guesthouse, as he was not going to use the electronic keypad on Shabbat. The students gladly complied, then settled back into chilling on the porch.

Lost in the moment, the students decided they were going to sing Tzion by Zusha, but then the gentleman and his wife emerged on the porch next door. Not wanting to disturb the couple, the students held off for a few minutes, but their enthusiasm overwhelmed their hesitance and they started singing. The couple went back inside, and the students worried their behavior had been somehow offensive. Then, from the guesthouse next door, the sounds of Yedid Nefesh drifted over to the students’ porch. After some slightly bewildered looks to one another, the students joined in. Tsur Mishelo came next. Afterwards, the students began Menucha V’Simcha and heard their voices echoed next door. This continued for about half an hour, until it was time for havdallah.

Before heading to shul, the Chassidic gentleman came over and knocked on the door. Streimel perched on his head, grin on his face, he thanked the students for being his second voice, and expressed regret that this shared love of music had been discovered so late in the day. Once Shabbos had ended, the couple gave two of the students a ride to the bus station while the third headed back to his vacation with his parents. That third student would like to remind everyone how good and pleasant it is when brothers and sisters dwell together in (a sometimes literal) harmony and believes that, regardless of denominational or religious affiliation, the ties that bind are so much stronger than those that divide.

About the Author
Ben Bernstein holds a certificate of completion from the Pardes Institute of Jewish Studies in Jerusalem and a Bachelors in Philosophy, Politics, and Economics from the University of Pennsylvania. He lives on the Upper West Side, where he was born and bred.
Related Topics
Related Posts
Ben Bernstein
Comments