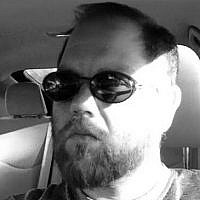 The Blogs
Erez Buki
Apply for a Blog
Advertisement
Please note that the posts on The Blogs are contributed by third parties. The opinions, facts and any media content in them are presented solely by the authors, and neither The Times of Israel nor its partners assume any responsibility for them. Please contact us in case of abuse. In case of abuse,
Report this post.

In the Spring of 2014 I enrolled in a Jewish History course offered at a prominent college in Los Angeles. In the next week the class followed the early plot of Jewish history while class attendance settled into a number less representative of those only “needing history credits”. The one religious Jew said he was taking the class in order to better understand how our history is represented in a secular perspective. He stopped coming after the first week. With Armenian-Americans, a 60 year old Trotskyist, and former students of Catholic school, the class was primarily filled by Jews like myself. We were raised in Los Angeles, had visited Israel many times, kept some form of kosher in the house, and had gone either to Hebrew school or a public school with a large Jewish population.

The self-exiled religious Jew had approximated my reasons for taking the class. I was a history major at the time and have some broad knowledge of many cultures. I always wonder how my studies might sound to those people I was learning about. What connective tissue is there between a scientific style of inquiry when such meaning remains incomplete to those being studied? With a Jewish experience in my pocket, I thought it was time to connect to how Judaism is taught to Americans.

We gained a small background on the Sumerians, Babylonians, Egyptians and Greeks with a perspective that Hebrew school doesn’t teach. In Jewish context, the nations are judged according to how they treated the Jews living among them. Peoples that didn’t question our traditions or offered to help us return to our homeland were good nations. Persia comes to mind. Our rivals, those that tried to impose their traditions upon us, and those who killed us while welcoming our exile as a kind of justice, these where bad. Lots of people come to mind.

In the college course we were led to see the contributions made to Judaism by the various peoples we have been in contact with. According to one lecture, the Greeks introduced symposium, the reclining during the meal that we find in Passover. Perhaps this is true, but there were no sources given for this. The fact that the Greeks came in contact with this tradition from the Levant was discovered in my own research. So, I would question as to whether Jews introduced symposium to Passover from the Greeks or if we got it from the same source the Greeks did. We recline on Passover as a distinction from our custom during the rest of the year, when the other peoples in the region normally reclined to eat. Seeing that the course was a survey, we didn’t spend enough time looking at supporting documents and this left me feeling that the class information was incomplete, even on its own scholastic terms. No matter, this was a piddling concern.

There is much more I could describe about the course but here is the point at which I finally became disgusted by the experience. As an introduction to the Zionist movement we learned, of course, about Dreyfus and how this French officer had been falsely accused and then used as a patsy for a corrupt French bureaucracy that was ill prepared to trust Jews to be properly loyal to France. As a response, Theodor Herzl gave a modern-European translation to the 2000 year old yearning of Jews everywhere, to return to our homeland. From this we went to the Holocaust and finally to the establishment of Israel.

The establishment of Israel was introduced to the class with the now infamous sequence of maps showing Israel’s current borders being called Palestine and an encroachment of Jews on what is assumed to be Arab Palestine. There is good reason to label some historical maps of modern Israel as Palestine. This was a common name for this province for many hundreds of years. When the Romans did not call it Syria, they eventually started to call it Palestine. The Turks and the British called it Palestine. Problematically, the map presents the land as an Arab Palestine when this has never been the case. The green parts of this map represents Arab land and white is where Jews lived. There is no context to the map. It does not say that Britain controlled the territory. It limits the Jewish lands to those specifically owned by Jews. Meanwhile, if land was owned by Britain, was wasteland, was road, or uninhabitable it is assumed to be an Arab Palestine that never existed.

The next map shows Israel at the ceasefire lines of 1948. This now is a different kind of map. In this second map we see the territory controlled by the legal entity we call Israel. The same map labels the green West Bank and Gaza as Palestine. If the map sought consistency with the previous map it would have shown where Jews lived in Israel and where Arabs lived in Israel, and in Jordan occupied West Bank and Egyptian occupied Gaza. Had the map attempting to show us the consensus of territorial control in that day, there would be no Palestine. It would be Israel, Jordan and Egypt.

The next map shows Israel within the territories liberated in 1967. It promotes a Jewish encroachment upon Palestinian land and any disputed area that Jews controlled begins to shrink the green bubbles of Arab territory. Taken as a whole, the sequence of maps paints a picture of Jewish expansion at the expense of an imagined, original, Arab Palestine. This map is pure propaganda and I thought it repugnant that the professor had chosen to express our history from point of view that is inconsistent with scholastic standards.

The heat in my face brought bubbles of sweat to my lips. My balding head soaked itself. I was angry. I was insulted. I was disappointed, and I had to speak up. I tried to remain calm in trying to explain to the teacher just how absurd it was for him to represent Jewish history with a Palestinian myth. It would be like representing our connection to G-d through the words of the famous Roman dogmatist, John Chrysostom. Chrysostom expressed a Roman, Christian-supremacists view of Jews. The maps presented a “Jews as imperialist, colonialist, encroachers on someone else’s land” perspective as fact. For a scholar to present history with such an unsubtle shallowness is lazy at best and malicious at worst.

If this sort of teaching can happen on a campus filled with a large population of proud Zionists, in a class dominated by them, what then can we expect in classes where pro-Palestinian, anti-Zionist students dominate the discussions? What can we expect from a campus in which the only Jewish experience taught is one where our culture is compartmentalized away from a experiential Judaism? What can we expect from a campus with a strong movement to delegitimize Israel and with professors who support this enmity against Jews and their nation? I have since transferred to my current place of study and knowing what I know about my new campus, I am about to find out.

About the Author
Growing up among Jews in Los Angeles, raised speaking Hebrew, and with regular visits to Israel, Erez Buki's life is bound with Israel. He currently is studying anthropology in a famously anti-Israel campus and is about to find how active resistance will effect his sanity. Wish him luck
Related Topics
Related Posts
Erez Buki
Comments