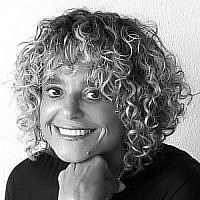 2013 was a bittersweet year. My “gay” marriage of thirty-one years broke apart as Marriage Equality was becoming a reality in the United States.

The LGBTQ community was on the path to marry legally, and my marriage was in pieces. Kept out of legal marriage for the past thirty years, I was now going to have to design a fair divorce.

The opposing lawyer articulated the situation in his statement “As you know this was a very brief marriage.”

Since when is thirty-one years “brief?”

In the thirty-one years we spent together, we raised a child, created a business, bought our homes, merged our lives and incomes.

We grew together. In the early years we struggled intensely with our parents. My Mizrahi parents were terrified and horrified. Egyptian Iraqi girls didn’t do such things they said. “Stop it!” they demanded.

Judy had come out years earlier, her Ashkenazi parents refused to talk about her gayness. Our parents feared we were ruining our lives, they were ashamed of being pitied by their friends. Love and hard work paid off — we were family, and they were the closest of in-laws.

Over the years, Judy and I became grandparents. And  eventually we took care of, and buried, our parents — “A brief marriage.” Really?

We knew we had to fight for change in the family and in the courts. We also knew who we were to each other. We named our relationship what it was, a marriage, and we introduced each other as “my wife,” despite discomfort in doing so. It was far from acceptable, or hip at the time, but it was necessary. We did what we had to do to normalize a very normal life. Even within our own community.

We fought for our marriage to be legalized at every chance possible over our thirty years. Twice as Domestic Partners, three different times in City hall filing marriage applications.

It is now 5 years since Marriage Equality legalized same sex marriage in the United States. Today the LGBT community is holding its breath. Will the new composition of the US Supreme Court nullify our civil rights heterosexual couples take for granted?  Will Marriage Equality become a very brief reality?

When my marriage started breaking into pieces, I interviewed both lesbian and gay male lawyers. They were convinced my demand that my divorce be treated as a heterosexual divorce was not a possiblitly. I had not been married for more than a minute under the new law, my marriage was too brief.

Fortunately I found a female lawyer, whom despite her misgivings, agreed to give it a try. It wasn’t easy to convince her that my ex was an activist with a conscience, and legal or not, Judy would not deny ours was a long term marriage. She would, despite being advised against it, eventually, honor it.

Judy and I grew up together. And as we grew up, what once seemed  “heternormative” began to look more and more like normal grown up life. And grown ups, gay and straight, generally want the same things in life. A good relationship, equal in the eyes of the community at large as well as the federal government. Taxes matter. Hospital visitation matters. Raising children who are not ridiculed by their peers  for having pariah parents matter. So much matters. Laws matter. Fairness matters.

Some will argue that “civil union,” bypassing “marriage,” might take care of legal rights. But there are problems with that. It bypasses true equality. I come from a life of separate and unequal. My parents were Jews in Arab lands,designated second class citizens by a system that penalized Jews for not being Muslims. I grew up Stateless because I was born a Jew without a legal nationality or passport. Gays and Lesbians are penalized for not being heterosexuals. Marriage Equality is our Passport as equal citizens. Modernity demands it. There is no way to justify blatant discrimination in civilized society.

The passage of Marriage Equality was an incredible milestone in Equal Rights. As I participated in celebrations in the streets of San Francisco, I was torn up inside. My marriage was over, the reasons always obvious in hindsight, and my financial future uncertain. I had spent decades fighting for a legal marriage and now I was without a path to a legal divorce.

I am not the first to suffer divorce. But I was one of the first lesbians to fight for a fair one when the law was still not on my side as a gay person.

We all deserve a Supreme Court that treats all American citizens as equals. In life our hearts will break, gay or straight, marriages will break queer or straight. But inshallah, may our civil rights persevere through liberal or conservative regimes and courts. It’s the right thing.