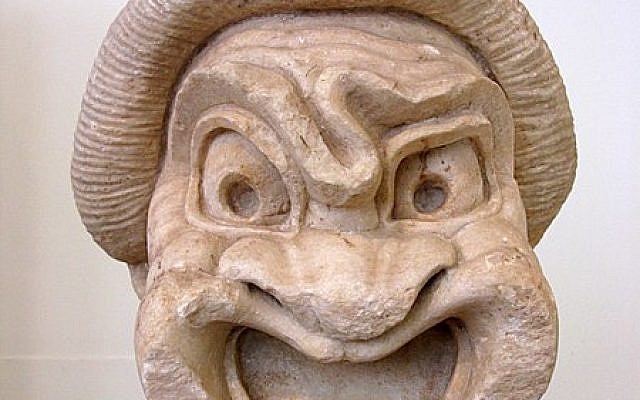 Long before the novel coronavirus made masks a fashionable part of respectable wardrobe, the custom developed to wear masks on the holiday of Purim. Jewish mask-wearing even predates the establishment of Purim, as the Bible reports that when Moses descended from Mount Sinai, his face shone with a strong light, and he covered his face with a “mask” (see Ex. 34:29-35). The Hebrew word used to denote Moses’ mask is masveh. In this essay we will explore the etymology of the Biblical Hebrew word masveh, as well as the Modern Hebrew word masechah, which also means “mask.” But first, let’s explore the word originally used in connection with the custom of wearing masks on Purim.

The earliest halachic authorities who mention the custom of wearing a mask on Purim refer to the practice as wearing partzufim, wearing “faces.” This wording is found in the response of Mahari Mintz 17, the Rema to Orach Chaim 696:8, and in Rabbi Yuzpa Shamash’s account of the old traditions of the Jewish community in Worms.

The Hebrew word partzuf — which appears once in the Mishnah (Yevamot 16:3), plus numerous other times throughout the Talmud and Midrashim — and the Aramaic word partzufa are actually Greek loanwords. The original Greek word, prosopon, literally means “facing the eyes,” as pros means “toward” and ops means “eye” (think of optometry or optical). Thus, the originally custom was for people “to wear ‘faces’ on their faces” on Purim. Interestingly, according to the Oxford English Dictionary, the Latin persona (“mask used by an actor”) also derives from the Greek word prosopon, and is the etymological ancestor of the English word person.

Now we can talk about the Biblical Hebrew word for “mask.” Masveh appears only three times in the entire Bible — all of these in the verses mentioning the “mask” that Moses used to cover his face. Rabbi Shlomo Ibn Parchon (the 12th century compiler of the Machberet HeAruch lexicon) more specifically defines masveh as a fabric placed over the face that has holes for the eyes, nose and mouth. He follows early grammarians like Rabbi Yehuda Chayyuj (945-1000), Rabbi Yonah Ibn Janach (990-1055), and Radak (1160-1235) in understanding masveh as the only word derived from the triliteral root SAMECH-VAV-HEY. However, Rashi suggests that the word masveh comes from Aramaic, as he finds apparent cognates of this word in the Talmud (Ketuvot 60a, 62b).

That said, other commentators find that there is another Biblical word derived from the same root as masveh. When Jacob blessed his son Judah, he said: “…he shall launder his garments in wine, and his clothing (suto), in the blood of grapes” (Gen. 49:11). Rashbam (to Ex. 34:33), Ibn Ezra (to Gen. 49:69, Ex. 34:33) and Chizkuni (there) all write that the word suto cognates with masveh. In fact, Menachem Ibn Saruk (920-970) in Machberet Menachem classifies both suto and masveh as derivatives of the monoliteral root SAMECH. Thus, the literal meaning of masveh is actually “clothing” or “fabric.” (The word sutot in the sense of “fabric” appears in the Mishna (Keilim 16:7), and Maimonides (in his commentary to the Mishna there) connects that word to the Biblical suto. Interestingly, Menachem’s famous interlocutor, named Donash Ibn Labrat (920-990), argues that suto means kesuto — “his covering” — with the letter KAF missing for some odd reason.)

Rabbi Shlomo Pappenheim of Brelsau (1740-1814) writes that the words masveh/suto are related to the Hebrew word stav (“autumn” or “fall”) and refer to soft, spongy fabrics worn to insulate oneself from the cold weather. Alternatively, he explains that those two words refer to fabrics placed on top of one’s clothes so that they do not get dirty (something commonly done during the season of stav).

When Rabbi Ephraim Lenchitz (1550-1619) discusses the Ashkenazi custom of wearing masks on Purim, he actually uses the word masveh, while Rabbi Zerach Eidlitz (1725-1780) uses both the words partzuf and masveh.

The Modern Hebrew word masechah (“mask”) actually appears in the Bible, but means something totally different. The Biblical term masechah refers to molten metal that was fashioned into a certain shape. For example, the Bible uses the term egel masechah (literally, “molten calf”) when referring to the Golden Calf (Ex. 32:4, 32:8, Deut. 9:16, and Nechemia 9:18). According to Ibn Janach and the Radak, the root of this word is NUN-SAMECH-KAF (nesech), which primarily refers to “pouring,” since metal heated to high temperatures becomes ‘liquidy,’ and therefore pourable. Other meanings derived from this root include “hiding” or “covering,” and those meanings seem to be the semantic basis for masechah in the sense of “mask” — as a mask covers or hides one’s face.

Another way of understanding the etymology of masechah is by tying it to the Biblical root MEM-SAMECH-KAF, which means “mixture,” both in the sense of mixing liquids (e.g., Isa. 5:22, Prov. 9:2, 9:5) and in the sense of mixing threads to create a fabric (as in masach, “curtain” or masechet in Judges 16:13-14). The Mishnaic Hebrew word masechet similarly refers to the woof threads that run across a woven fabric (see Rabbeinu Chananel to Shabbat 59b, Maimonides to Keilim 21:1, and the Rash to Negaim 11:9). If the etymology of masechah as “mask” lies in this root, then masechah and masveh closely resemble each other. (MEM-SAMECH-KAF seems to be congruent with the more familiar root that means “to mix” or “dilute,” MEM-ZAYIN-GIMMEL. That congruency is based on the interchangeability of the letters SAMECH with ZAYIN, and KAF with GIMMEL.) 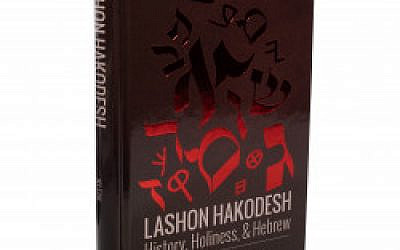 “This is an excellent book and very informative. It answered all my questions, and clarified all that I was wondering about the Hebrew language. “- Verified Book Reviewer on Amazon.com

Another related word is masechet in the sense of a “tractate” (like tractates of the Mishna or within the halachic Midrashim). Sefer Chassidim (929) writes that masechet in this sense derives from the Biblical word masechet (Judges 16:13-14), which means “interwoven fabric,” because a masechet refers to the tapestry of rabbinic rulings on a given topic that are culled together into one work. In his introduction to Tosefot Yom Tov, Rabbi Yom Tov Lipmann Heller (1579-1617) writes that the word masechet is related to the Biblical phrase maschah yeynah (“she mixed her wine”) that appears in Proverbs 9:2, as a masechet comprises a “mixture” of various laws. Interestingly, Rabbi Binyamin Mussafia (1606-1675) suggests that the root of the word masechet is SAMECH-KAF, which means “to listen” (as in hasket, Deut. 27:9), since “listening” is the core mechanism by which the Oral Torah — typified by the Mishna — is transmitted.

The Talmud (Megillah 12a) explains that the Jews in the time of Ahasuerus deserved to be destroyed because they had previously bowed down to Nebuchadnezzar’s idol. However, the Talmud clarifies that since the Jewish People did not actually forsake G-d by bowing to those idols, but rather did so out of fear, they did not really deserve to be destroyed. Instead, just as they only superficially worshipped idolatry, while on the inside remained loyal to G-d, so too did they deserve to undergo an ordeal whereby they would appear to be doomed to destruction on the surface, while in practice they would not end up being destroyed. Indeed, the Talmud elsewhere (Chullin 139b) characterizes the story of Purim as G-d hiding “His face” (Deut. 31:18) from the Jewish People, as though He wore a mask that concealed His true plans.

Based on this explanation, Rabbi Moshe Chagiz (1671-1750) writes that the custom of wearing masks on Purim (which he calls partzufim) mimics the way G-d treated the Jewish People in the story of Purim: He put up a façade of planning to the destroy the Jewish People, while really, on the inside, He had no such intentions.