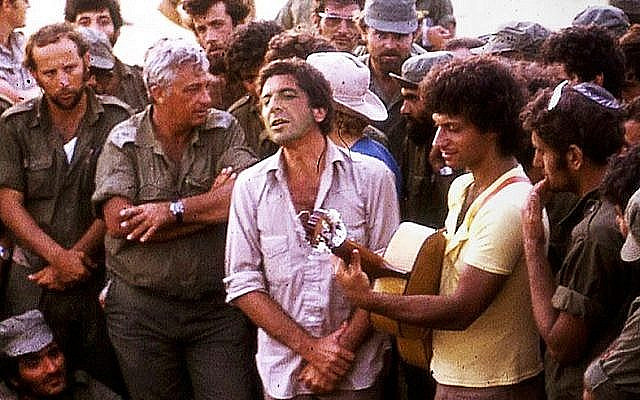 Leonard Cohen, center, performing with Israeli singer Matti Caspi, on guitar, for Ariel Sharon, with arms crossed, and other Israeli troops in the Sinai in 1973. (Courtesy of Maariv via JTA)

Len was a lovely warm person who made sure everyone who stepped into synagogue felt at home. Len’s story captured in it so much of the Jewish story in him. Len’s father survived the Holocaust by jumping off a train headed to Auschwitz. A few years ago, Len faced the most horrific of tragedies: he lost his young son who died suddenly. Two years ago, while many, myself included, were not ready to get back to services during the COVID pandemic, Len was in Shul making sure there was a minyan on Rosh Hashana. Not long after, Len learned that he had Leukemia. After heroically fighting for about a year, Len was doing so much better.

I went to visit him, we walked around his home, we talked, and he was hopeful. A few weeks later, I got a call from him Friday afternoon. He had just come back from the hospital; his Leukemia had relapsed. He was told he had only two weeks or so to live. I rushed over to his house and spoke to him. It was more devastating than any imaginable conversation. It was like attending a person’s own Shiva. Over the next two weeks, I came back. Heartbreaking though it was to watch Len suffer and die, being able to be there at his side meant everything to me. We stood at Len’s bedside, sang the Rosh Hashanah and Yom Kippur songs, and brought a Shofar for him to lovingly cling onto when he can no longer speak.

There at Len’s bedside, I discovered something I should have learned from Len when he was well but did not get to learn from him until his final days–the power of the High Holidays. Despite the many times I have observed and spoken on the Jewish High Holidays, I had no idea of how much these days really mean to us. In those last days of unimaginable pain, suffering, and psychological torment of knowingly awaiting his slow death, what brought us together with the most meaning were these days. The tuns, the shofar, the words, the reliving of those times we would stand near the Bima with our arms around one another’s shoulders, the Yehe Shelama Rabbis, the Avinu Malkenu’s, the Esa Einai El Heharim, and so much more were all that seemed to bring some peace to his tortured body and spirit.

It was then that I realized something profound about the High Holidays. We often see the High Holidays as the airport runway for our year, the launching pad for the spaceship of our ambitions, or the command center from the ship of our journey. Perhaps we see these days as the introduction to our upcoming very full year. And yet standing there with Len as well as other times I stood with people in their final moments, I realized how in some ways, the High Holidays are our destination. I realized how in some ways, where we stand now is not an added feature in our lives, but it is our very hardware. Yom Kippur might be just one day a year, but to us, it may reflect our very true selves. On other days of the year, we may be unable to resist distractions, temptation, triviality, conflict, and materialism, yet for just one day a year, we are blessed with the gift of being who we truly are. “Avinu Malkenu, in lanu Melech Ela Ata–our Father our King–we have no King other than you.”

Somehow, fasting, avoiding leather shoes, standing together in synagogue, not showering and bathing, and avoiding bodily pleasures are suddenly not imposed restrictions but rather gifts that are meant to give us the gift of who we truly are. These tools allow us to experience our true selves. For one day a year, we are able to detoxify ourselves from everything else and focus on who we are.

And so, we begin the day with the prayer of Kol Nidray, a prayer many scholars have noted for being extraordinarily technical and dry. In this prayer, we annul any vows made mistakenly, commitments entered into under false pretenses, and paths we have promised to take with limited information. Suddenly, we discover who we really are. Like the converso Jews forced to lead Catholic lives in the 15th Century under the Spanish Inquisition who later fled to other Jewish communities realizing the vows they declared to the Spanish Inquisitors were null and void, we too realize there is part of our life we may have gotten entrenched in, but suddenly find ourselves in a different environment–one we believe is truer to who we are.

That is the power of Kol Nidray, Yom Kippur, and the High Holidays. It is the part of our life that might be small in proportion compared to the rest of the year but might just be the essence of who we are. We may not know it. We may not be conscious of it, but there it is at the core of who we are.

There is no more famous embodiment of what Yom Kippur is to us than another Jew who died from Leukemia–Leonard Cohen. In October 1973, then young and famous Cohen had been shaken to the core of his being by the outbreak of the Yom Kippur war. As told in detail in Matti Friedman’s excellent book “who by fire,” words taken from the U’netaneh Tokef prayer, Cohen is at the time enjoying a bohemian life on the Greek Island of Hydra. He is sitting on the beach on Yom Kippur and hears on the radio that war has broken out in Israel. Without thinking much or packing much, Cohen hitches a ferry to Athens and gets on a plane to Tel Aviv, where he plans to find a Kibbutz he can volunteer on. After landing, Cohen stops in a cafe on the Tel Aviv beach where two famous Israeli singers think they just saw Leonard Cohen but have a hard time believing he is there, so they go and ask him. He tells them he is and that he is planning to volunteer on a Kibbutz, and they respond that he would do more good by performing on the front lines.

The rest is history. Cohen went on to sing in hospitals where injured soldiers and soldiers in their last hours sang on the frontlines in the Sinai and reinvigorated the spirits of many Israelis who felt alone and in despair. Decades later, after becoming a high-ranking Buddhist monk, living in silence and seclusion, Cohen always knew where he belonged. In some ways, Cohen’s story is like the joke about a monastery in the Himalayas that only few can enter. A Hasidic woman from Brooklyn shows up at the feet of the monastery dressed up as if she is walking on 13th Ave. in Brooklyn, and demands to see the head monk. She is told it is impossible to see him as he hardly speaks or eats and meditates most of the day. After asking many times, they allower her in on the condition, she can only say one sentence. The woman agrees. She walks right over to the meditating Munk and says: “Chaim, it is me, your mother; come back home.” In his final years, Cohen expressed his will to die as a Jew, and was buried in a traditional service in the Shaaray Shomayim congregation in Montreal.

Yom Kippur and Kol Nidre remind us who we are at our core. They are a call on us to connect to our very essence. Yet connecting to who we are is not just about pivotal moments. It is about these moments calling out to every single day in our lives, asking us to kindle those days with the sanctity of Yom Kippur. It is never easy to draw the elevation we feel during Kol Nidray on a cold evening in December, the waves of forgiveness and compassion during an altercation we might have with a friend in February, or the profound sense of how much meaning life has while fixing something in our apartment in April. Yet the call of the High Holidays is to take those moments that mean most to us and make them part of us during the year. Chief Rabbi Jonathan Sacks speaks of the difference between what is important and what is urgent. All too often in life, we address what is urgent in our lives, neglecting what is most important to us. Yom Kippur is about stopping everything that is most urgent–even eating and drinking–and cherishing that which is most important to us. Shana Tova.